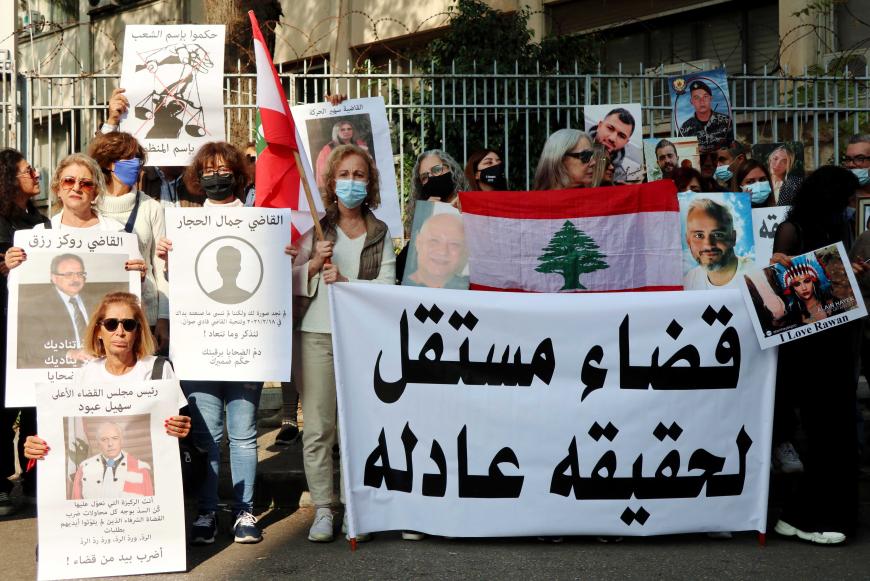 Families of Port Blast’s victims show portraits of their beloved ones near the Palace of Justice in Beirut, November 25, 2021. Relatives of victims call for an independent judiciary to achieve justice. © 2021 Elisa Gestri/Sipa USA via AP Images
Share:

– The corrupt and incompetent Lebanese authorities have deliberately plunged the country into one of the worst economic crises in modern times, demonstrating a callous disregard for the rights of the population, Human Rights Watch said today in its World Report 2022.

The impact of the economic crisis on residents’ rights has been catastrophic and unprecedented. Almost 80 percent of Lebanon’s population now lives under the poverty line, with 36 percent in extreme poverty – up from 8 percent in 2019. Yet, Lebanese authorities have stubbornly refused to carry out any reforms to mitigate the impact of the crisis, and they have repeatedly delayed promised social protection plans.

“The clear indifference of Lebanese policymakers to the suffering of the population amid one of the worst economic crises in modern times borders on the criminal,” said Aya Majzoub, Lebanon researcher at Human Rights Watch. “The international community should use every tool at its disposal to pressure Lebanese policymakers to put in place the reforms necessary to pull Lebanon out of this crisis, including by imposing sanctions against leaders responsible for the ongoing grave human rights violations.”

In the 752-page World Report 2022, its 32nd edition, Human Rights Watch reviews human rights practices in nearly 100 countries. Executive Director Kenneth Roth challenges the conventional wisdom that autocracy is ascendent. In country after country, large numbers of people have recently taken to the streets, even at the risk of being arrested or shot, showing that the appeal of democracy remains strong. Meanwhile, autocrats are finding it more difficult to manipulate elections in their favor. Still, he says, democratic leaders must do a better job of meeting national and global challenges and of making sure that democracy delivers on its promised dividends.

The Lebanese pound has lost 90 percent of its value since October 2019, eroding people’s ability to access basic goods, including food, water, health care, and education. Fuel shortages have caused widespread electricity blackouts, lasting up to 23 hours a day. Private generators – a costly alternative – have not been able to fill the gap, leaving large portions of the country in complete darkness for several hours a day.

No one has been held accountable for the catastrophic explosion in Beirut’s port on August 4, 2020, which killed at least 219 people and devastated half the city. A Human Rights Watch investigation found evidence that strongly suggests that some government officials foresaw the death that the ammonium nitrate’s presence in the port could cause and tacitly accepted the risk. This amounts to a violation of the right to life.

Yet, Lebanese leaders have continued to obstruct and delay the ongoing domestic investigation. Families of the victims and local and international rights groups have called for a UN Human Rights Council-mandated international, independent investigation into the Beirut Blast.

Meanwhile, officials cracked down on freedom of opinion and speech. There has been no meaningful progress on the investigation into the assassination of the prominent intellectual and Hezbollah critic Lokman Slim. The authorities use the inherently unfair military courts to intimidate people or retaliate against critical speech or activism.