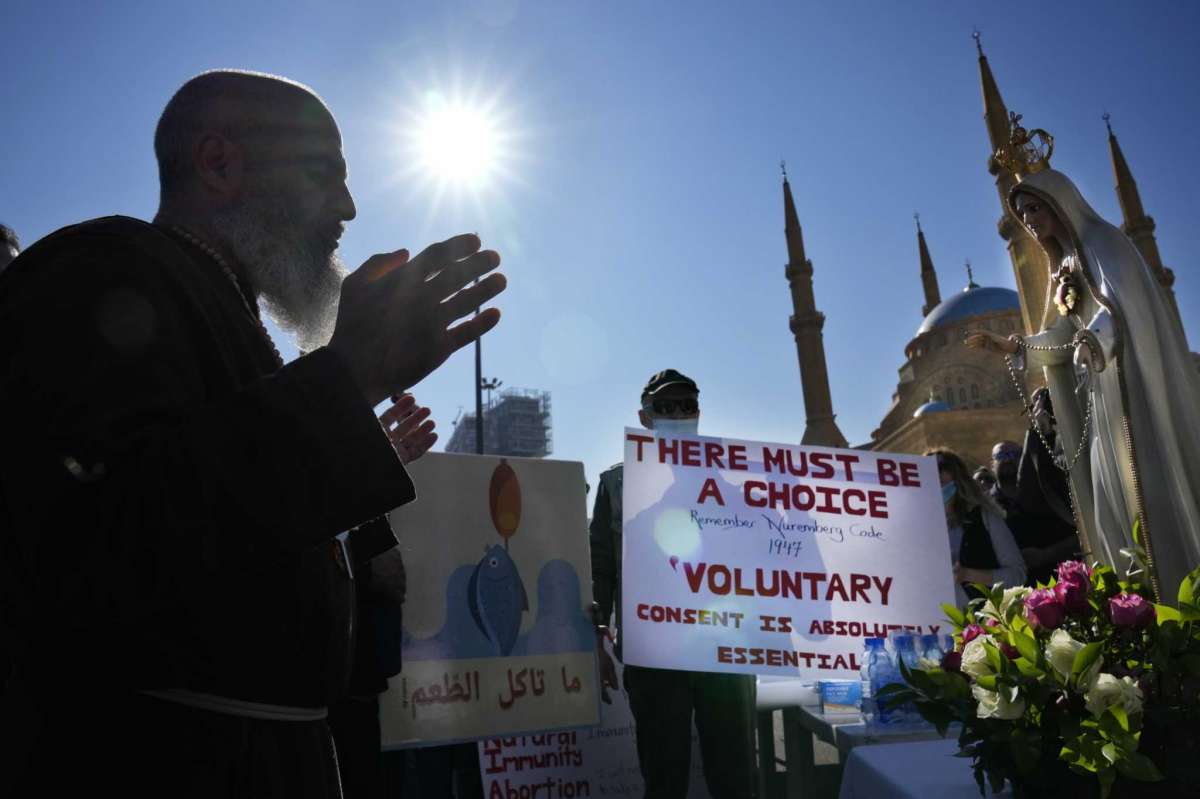 A protester holds a placard during a rally to protest measures imposed against people who are not vaccinated, in Beirut, Lebanon, Saturday, Jan. 8, 2022. Vaccination is not compulsory in Lebanon but in recent days authorities have become more strict in dealing with people who are not inoculated or don’t carry a negative PCR test. Most of the patients that are being treated at hospitals have not been vaccinated according to the ministry of health
Share:

BEIRUT — Hundreds of people rallied in Beirut on Saturday to protest measures imposed against the unvaccinated, saying individuals should have the right to decide whether to be inoculated or not.

Vaccination is not compulsory in Lebanon, but in recent days authorities have cracked down on people who are not inoculated or don’t carry a negative PCR test.

Saturday’s protest by nearly 300 people in downtown Beirut came a day after the daily number of new coronavirus cases hit a record 7,974.

The protest came days after authorities imposed fresh restrictions — including the requirement of a vaccination certificate or negative PCR test for entry into restaurants, hotels and similar venues.

“No to the dictatorship of vaccination,” read one banner carried by protesters.

Health Minister Firas s Abiad criticized the protesters, saying that over 30,500 people were vaccinated on Saturday alone as part of a government campaign focusing on students and teachers. Educational institutions are to resume classes on Monday.

“Vaccines are not mandatory, and are free. They are offered to everyone, including refugees and foreign migrant workers,” Abiad tweeted. “Finally, vaccines save lives, but for some, ignorance is bliss.”

“An Omicron wave that started three weeks ago is turning into a Tsunami. The situation in hospitals and ICUs remains stable, capacity is being boosted,” Abiad added.

Lebanon, with a population of six million including a million Syrian refugees, has registered more than 760,000 cases and 9,250 deaths since discovering its first COVID-19 case in February 2020.Comments