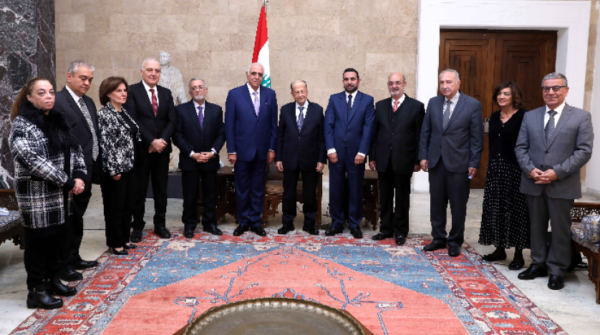 President Michel Aoun meets with a delegation from the Lebanese Press Editors Syndicate at the Baabda Palace. (NNA)
Share:

President Michel Aoun announced that he was in favor of holding a cabinet session despite being boycotted by Shiite ministers, in a remarkable stance against his ally, Hezbollah.

“We are faced with the necessity of choosing between politics and the judiciary, so what will prevail?” Aoun asked, stressing that it was not possible to keep the government paralyzed, “as there are matters that need urgent decisions, including, for example, approving the budget.”

The president’s remarks came on Tuesday during a meeting with a delegation of the Syndicate of Press Editors.

The cabinet has not met since Oct. 12 amid a row over a probe into last year’s deadly Beirut port blast. Hezbollah and its allies have pushed to remove the lead investigator of the explosion, accusing him of political bias.

On his relation with Hezbollah, the Lebanese president said: “There are things that must be said between friends, and we call for abiding by the constitution, because disrespecting it will lead to chaos.”

Aoun emphasized “a great deal of understanding” with Prime Minister Najib Mikati, noting that different opinions on some matters “do not mean disagreement.”

Asked whether he would accept that his term be extended by Parliament in the event of failure to hold the elections, the president underlined that there would be no vacuum, reiterating that he would leave office at the end of his presidential tenure.

Aoun rejected claims that he was seeking to restore the presidential system, saying: “The current authority is consensual with three presidents, and therefore it is difficult to rule… We hope that after these events, the situation will change.”

Pointing to the need to amend the constitution, he stated: “I consider it the end of a certain era that extended over 30 years and needs to be changed.”

“I will not be able to achieve this in the remaining year of my term, but I announce it,” the president added, referring to the Taif Agreement.

Elections delayed till May