UN chief to visit cash-strapped Lebanon in a ‘solidarity’ move 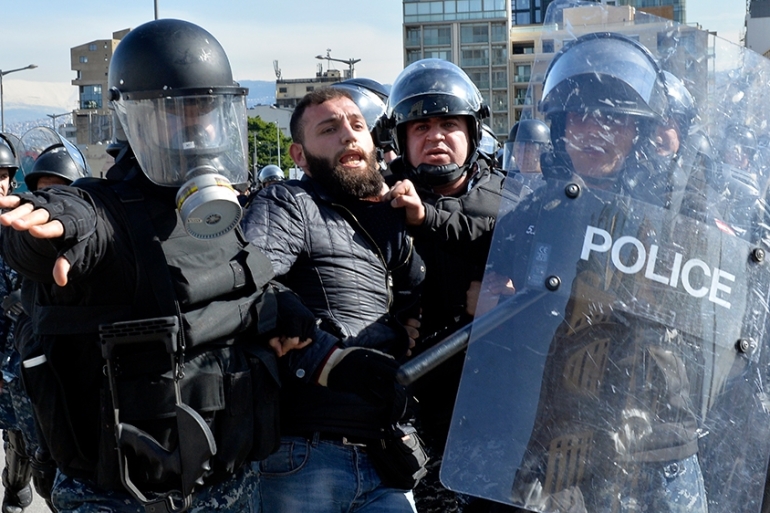 Riot police arrest a bank customer as he tried to storm a bank in Beirut, Lebanon. Bank customers cannot withdraw foreign currency from their accounts and the Lebanese pound has plummeted, pushing once-affluent Lebanese families into poverty, while political gridlock has stymied efforts to tackle a mountain of public debt . AP
Share:

UN Secretary General Antonio Guterres will visit Lebanon from Sunday to Wednesday to show support for a country battling a financial crisis, Covid-19 and the fallout from last year’s port blast, he said on Thursday.

He will meet President Michel Aoun, House Speaker Nabih Berri, Prime Minister Najib Mikati as well as religious leaders and campaigners, pay tribute to victims of the Beirut port blast and meet peacekeepers on the border with Israel.

The explosion at Beirut port in August 2020 destroyed a large section of the capital and killed more than 200 people.

Mr Guterres said he would “express [his] solidarity” with “people who have suffered for far too long” in Lebanon, which has been in economic free-fall since 2019 and is currently seeking a bailout from the International Monetary Fund (IMF).

“The first thing that’s necessary is that the political leaders of Lebanon come together,” Mr Guterres told reporters on Thursday.

Lebanon’s squabbling officials agreed that losses in the country’s financial sector amount to between $68 billion and $69bn — a crucial first step in negotiating an IMF support package.

The Lebanese pound has plummeted, pushing once-affluent Lebanese families into poverty, while political gridlock has stymied efforts to tackle a mountain of public debt and drive new investment.

The financial spiral has also made the country vulnerable to the spread of the new Omicron variant of coronavirus, as hospitals struggle to pay staff and purchase equipment.

In preparation for a potential spike in cases following the December holidays, the government has announced mandatory vaccination measures will begin from January 10.