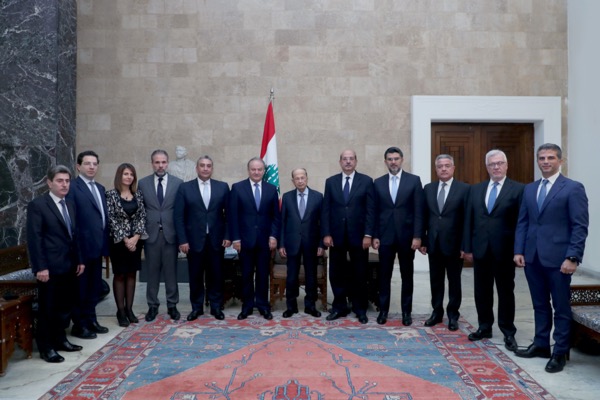 Lebanon President Michel Aoun called on all parties to “protect” the judiciary and “prevent pressures on judges ”during meeting with the Beirut bar association at the Baabda palace
Share:

Lebanon President Michel Aoun called on all parties to “protect” the judiciary and “prevent pressures on judges.”

Aoun ‘s remarks were made during in a meeting with the newly-elected Beirut Bar Association chief Nader Kasbar and the members of the Association.

“Judge and lawyers must be a firm bulwark in the face of corruption and political interferences that conceal the facts and obstruct the delivery of justice,” the president stressed.

His remarks come weeks after his ally the Iranian backed Hezbollah militant group and its allies have been presenting the cabinet of PM Najib Mikati of conducting any meetings.

“We demand the prime minister and the concerned officials lift the obstacles and end the causes that prevent it from meeting, so that it can relaunch with vitality, seriousness and effectiveness, and work to secure people’s needs,” MP Hassan Ezz El-Din a member of the Hezbollah parliamentary bloc was quoted as saying on Monday.

“Some judges have deviated from the legal and constitutional path, and followed mechanisms that lead to politicization, selectivity and populism,” he added in reference to Judge Tarek Bitar the lead judge investigating the massive explosion .

Government meetings have been suspended since 13 October 2020 due to the insistence of ministers affiliated with Hezbollah and the Amal movement to dismiss Judge Bitar.

Ezz El-Din added: “Judge Al-Bitar caused more division and sectarianism” and he called to “immunise the judiciary from political and other interference in order to preserve justice.”