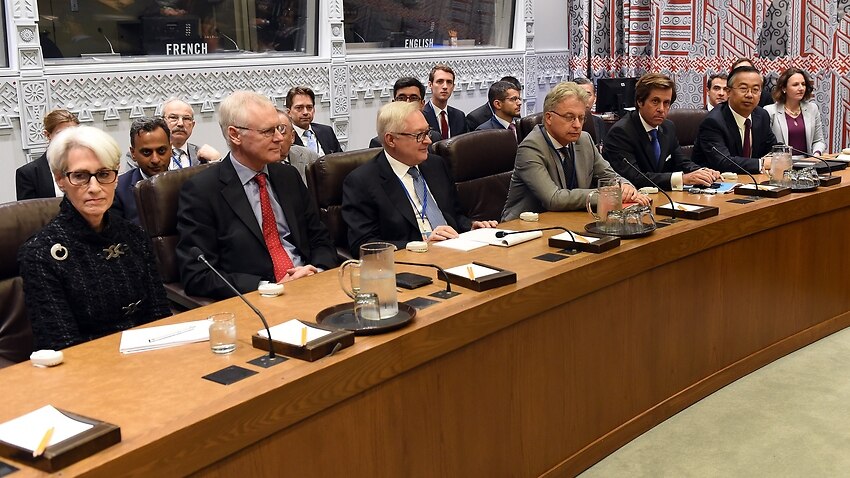 Iran has walked back all concessions it made in previous negotiations on reviving the 2015 nuclear deal but is insisting on pocketing compromises from other governments while issuing fresh demands, a senior U.S. official told reporters on Saturday.

Iran’s aggressive stance at the talks this week in Vienna with world powers, coupled with a “provocative” acceleration of its nuclear program, raised questions about whether the nuclear agreement“can still survive,” the senior State Department official said.

European partners at the talks and representatives from Russia and China were “quite taken aback” with Iran’s negotiating position, which seemed to reject the results of six rounds of talks earlier this year, the official said.

European diplomats on Friday offered similarly pessimistic assessments of the talks that were suspended Friday, and Secretary of State Antony Blinken said that Tehran did not appear serious about doing what was needed to return to the terms of the nuclear deal.

Iranian chief negotiator Ali Bagheri said on Friday that his government’s proposals remain on the table and that Tehran was waiting for “documented and logical” responses, according to Iran’s Mehr News Agency.

Iran’s mission to the United Nations did not respond to a request for comment.

After the parties agreed to pause the talks on Friday, European diplomats suggested the discussions could resume next week. But the senior State Department official, who was not authorized to speak on the record, said the timing of the next round of discussions was less important “than whether Iran will come back with a serious attitude prepared to negotiate seriously.”

Secretary of State Antony Blinken said the United States planned to consult with allies on how to proceed, but he said time was running out on reviving the deal. “And we will see if Iran has any interest in engaging seriously, but the window is very, very tight,” Blinken said.

The senior State Department official declined to say at what point the White House would conclude that the talks were pointless and that the nuclear deal was effectively dead.

The administration was “not standing still” and “we’re obviously preparing for a world in which there is no return to the JCPOA,” the official said, while adding that “it is not our preference. “

The official suggested that the Biden administration could choose to take punitive measures against Iran over its nuclear activities, even before giving up entirely on the Vienna negotiations.

“The fact that we’re sitting in Vienna doesn’t mean that we can’t take steps to make clear to Iran that there’s a price to pay if it continues to stonewall. So even as we speak today, it’s not as if Iran is moving and we are sitting back and waiting,” the official said.

The United States is taking part indirectly in the Vienna talks on the insistence of the Iranians, with U.S. officials relaying messages to the Iranian delegation through European diplomats.

Known as the Joint Comprehensive Plan of Action, the 2015 nuclear deal was signed by Iran, Britain, France, Germany, China, Russia and the United States. The agreement imposed strict limits on Tehran’s nuclear program designed to prevent the regime from building nuclear weapons. In return, world powers eased sanctions on Iran.

But in 2018, President Donald Trump pulled the United States out of the deal, reimposed sanctions and introduced new economic penalties on Iran as part of a “maximum pressure” campaign. Iran has responded by flouting the restrictions on its uranium enrichment and other nuclear activities, while limiting access to U.N. inspectors.

President Joe Biden offered to return the United States to the accord if Iran also returned to abiding by the provisions of the agreement. Talks on reviving the deal made some progress until June, when a hardline cleric, Ebrahim Raisi, was elected president in Iran. The discussions were held up for five months, with Iran’s new government saying it needed time to review the issue and prepare its negotiating stance.

The senior U.S. official, citing recent reports by the U.N. nuclear watchdog, the International Atomic Energy Agency, said Iran has used the past five months to advance its nuclear program, putting the entire 2015 deal at risk.

“If they choose to accelerate their nuclear program as they seem to have done late, then there’ll be less time left for the JCPOA to be resurrected,” the U.S. official said.

On Wednesday, the third day of the talks in Vienna, the IAEA said Iran had started producing enriched uranium with more advanced centrifuges at an underground plant in Fordow. The 2015 deal prohibits Iran from enriching any uranium at Fordow.

Iran played down the IAEA report as routine.

Arms control experts say Iran is anywhere from several weeks to two months away from having enough fissile material to build a nuclear weapon. When Iran was complying with the 2015 nuclear deal, the breakout time was estimated at a year.