France to work with Saudi Arabia to resolve Lebanon crisis 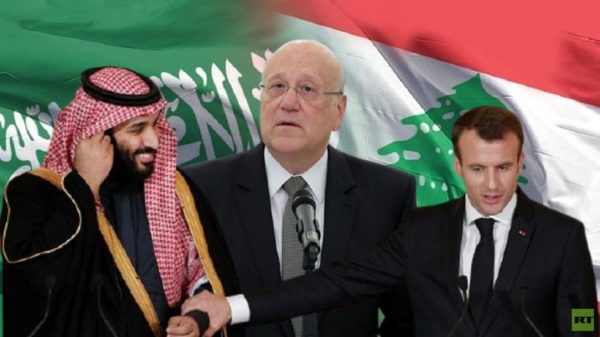 France and Saudi Arabia have held a joint phone call with Lebanon’s Prime Minister Najib Mikati, a gesture seen as significant in resolving an unprecedented diplomatic crisis between Riyadh and Beirut.

The call was made on Saturday as French President Emmanuel Macron visited Saudi Arabia after trips to the United Arab Emirates and Qatar.

The kingdom and other Gulf states withdrew their ambassadors from Beirut last month, angered by a government minister who criticised the Saudi-led war in Yemen.

The minister resigned on Friday.

Macron, who was in Saudi Arabia for talks with the Saudi Crown Prince Mohammed Bin Salman, told reporters that Riyadh had committed to re-engage financially in the short term.

“We are, therefore, now going to work in a very concrete way to put this together between the two of us,” he said.

Macron said that during the call with Mikati, he and Prince Salman relayed “a clear message Saudi Arabia and France want to be fully committed”.

“We want to commit ourselves to supporting the Lebanese people and therefore do everything possible to ensure that trade and economic reopening can take place,” Macron told reporters in remarks before departing the kingdom.

The French president indicated that France and Saudi Arabia will work together to offer essential humanitarian assistance to Lebanon, which is facing an economic crisis brought on by failures in government and pervasive corruption.

Mikati said the call he had with Prince Salman and Macron was “an important step” towards restoring relations with countries in the Gulf.

The Lebanese cabinet said in a statement on Facebook that Mikati stressed his government’s commitment to making reforms.

It marked another intervention by Macron to try to aid Lebanon, a nation that was once a French protectorate. It also marked the first call between the Saudi crown prince and Lebanon’s prime minister since Mikati took office in September.

Macron said he would call his Lebanese counterpart, Michel Aoun, on his return to Paris.

Macron has led international efforts to resolve the political and economic crisis in Lebanon. But despite staking a lot of his political capital on the issue for more than a year, he has failed so far to push the country’s squabbling politicians to carry out economic reforms that would unlock vital foreign aid.

In October, Riyadh had expelled Lebanon’s envoy to the kingdom, recalled its ambassador to Beirut and banned Lebanese imports following the remarks by George Kordahi, an ally of the Hezbollah movement, which Riyadh considers a “terrorist” organisation. The UAE and Bahrain followed suit.

Al Jazeera’s Zeina Khodr, reporting from Beirut, said “there’s no doubt that a new page has been opened in the relationship between Lebanon and Saudi Arabia”.

“It really is a change in strategy, in policy on behalf of Riyadh. Its policy has been ‘For us, it’s useless to engage with a government that is controlled by Iranian-backed Hezbollah’. And Mikati’s government is dominated by Hezbollah along with its allies. So now, the crown prince talking to the prime minister of Lebanon, and the prime minister tweeting this is a new beginning, it will help revive brotherly relations,” she said.

“Because we have to remember Gulf Arab states were the traditional allies of Lebanon. But this relationship has been strained for years from what Saudi Arabia perceives as the Iranian control and domination over Lebanese politics,” Khodr added. “So a first step has been taken, but it’s too early to say whether or not as it used to be will be restored.”