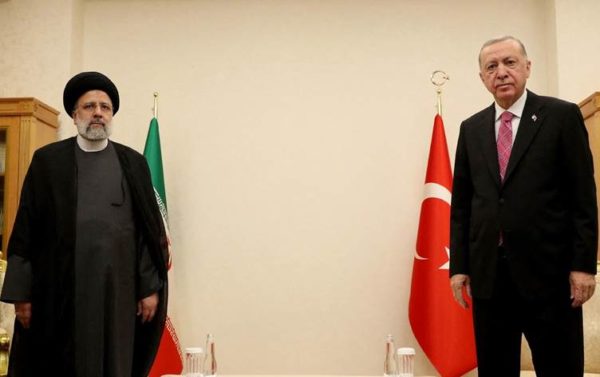 Referring to the PKK as a “terrorist group,” Iranian President Ebrahim Raisi told Turkey’s Recep Tayyip Erdogan that the group threatens the security of the Middle East and that Tehran and Ankara should eliminate the threat, according to a statement from Raisi’s office. The two met while attending an economic summit in Ashgabat, Turkmenistan.

The PKK is an armed group fighting for greater rights for Kurds and Ankara considers it a terrorist organization. Turkey and Iran frequently carry out cross-border ground and air operations claiming to be targeting Kurdish groups based along the border or inside the Kurdistan Region where the PKK and Kurdish opposition groups from Iran all have a presence.

Raisi also highlighted the need to end the Islamic State (ISIS) threat in Iraq and the Kurdistan Region, especially in areas disputed between Baghdad and Erbil.

Erdogan held the United States responsible for threats from both the PKK and ISIS.

“The White House is training and arming all terrorist groups in the region, including ISIL [ISIS] and the PKK, and providing them with terrorist equipment and tools to create insecurity,” Raisi’s statement quoted Erdogan as saying, adding that stability can be achieved with the help of other countries.

Erdogan’s office did not immediately release details of his meeting with Raisi.

Scores of Iraqi Kurdish civilians have died as a result of Turkish and Iranian airstrikes and artillery fire within Kurdistan Region’s borders. Turkey and Iran argue that Kurdish opposition groups and the PKK are destabilizing their countries by launching attacks from Kurdistan Region territory.

Erdogan and Raisi also discussed the situation in Iraq following last month’s parliamentary election that could have re-shaped the country’s future but has led to repeated protests by losing parties, mostly those affiliated with and backed by Iran and its militias. Seven weeks after the vote, results are still not finalized as the electoral commission has carried out a partial manual recount to resolve complaints.

“The Islamic Republic of Iran supports and emphasizes the establishment of a strong government accepted by the Iraqi people,” Raisi said, noting the importance of stability, peace and respect for the territorial integrity of Iraq.

Iran and Turkey share complex ties of tension and cooperation as both countries compete for influence in the Middle East.