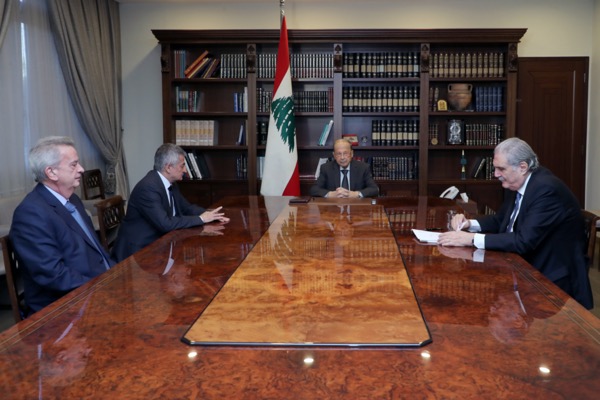 BEIRUT, Nov 24 (Reuters) – Lebanon’s president told central bank governor Riad Salameh on Wednesday to provide data for a forensic audit of the bank, saying the restructuring consultancy Alvarez & Marsal(A&M) had said it did not have information it needed a month after starting.

President Michel Aoun made the comments in a meeting with Salameh and Finance Minister Youssef Khalil about the audit, part of efforts to address the fallout from Lebanon’s financial collapse in 2019 that has left swathes of the nation in poverty.

More than two months after a new government took office, efforts to start resolving the crisis appear to be going nowhere fast. Salameh said on Tuesday Lebanon had yet to give the IMF its estimate of losses in the financial system, without which Beirut cannot begin serious talks for IMF support.

An audit of the central bank is one of the demands of foreign donors who have said they will not release funds for Lebanon until it reforms.

The governor and minister told the president they were “doing what is necessary” to meet A&M’s requests as quickly as possible, the presidency said in a statement.

A&M previously withdrew from auditing the central bank in November 2020 because it did not receive data required to carry out the task. It agreed to return in September 2021 after the authoritiespromised to ensure it received everything it needed.

An official source told Reuters that A&M had informed the presidency a few days earlier it would again withdraw if it did not receive more information from the central bank, leading the president to summon the governor on Wednesday.

A&M and the central bank did not immediately respond to requests for comment.

The central bank said on Tuesday it had met A&M’s logistical needs and provided data but said it had received a request on Nov. 11 for “clarifications”, which it was working to address.

The official source said the central bank had “delayed and delayed until A&M told (the presidency) … that if they don’t give (the data) to them, they will stop”.