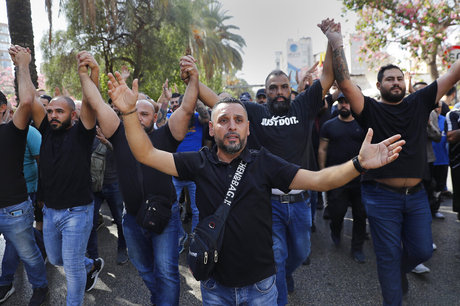 Supporters of the Shiite Hezbollah and Amal groups chant slogans against Judge Tarek Bitar, who is investigating last year’s deadly seaport blast, during a protest in front of the Justice Palace, in Beirut, Lebanon, Thursday, Oct. 14, 2021. Lebanon’s interior minister said at least six people have been killed in armed clashes in Beirut that erupted Thursday during protests against the lead investigator into last year’s massive blast at the city’s port. (AP Photo/Hussein Malla)
Share:

Lebanese with long memories are beginning to fear that the horrors of their 15-year-long civil war that began in 1975 might yet return.

The country is split by two major issues: the failure of those in power to deal with the catastrophic economic situation, and the investigation into who was responsible for the massive explosion at Port Beirut in August 2020.

As the economic crisis worsens, there is real anxiety that the country could go into free fall and suffer a complete collapse.  Lebanon‘s currency has lost more than 90 percent of its value in the past two years and continues to depreciate, there are acute shortages of food and basic necessities, and prolonged power outages have become the norm.  Beirut has recently endured periods of 24 hours without electricity.

The failure of power supplies has wider implications than mere inconvenience.  Essential services, like the nation’s hospitals, are in jeopardy.  If the emergency continues the vital tourism industry, already at a low ebb because of COVID, can scarcely continue to function – and if that collapses the whole financial system could go the same way.  The public have no faith that those in power will take effective steps to remedy the situation. As the Washington Post recently pointed out: “With corruption so endemic, citizens flatly do not believe politicians’ promises to reform the system. Cabinet members in the new Lebanese government come from the same political class that has been enriching itself illegally – and would lose if there were serious economic reforms.”

In the city-shaking explosion at Beirut port last year, 2,750 tonnes of ammonium nitrate were detonated, resulting in the death of more than 200 people. Victims of the explosion are demanding that those responsible are brought to justice, but public opinion is well aware that powerful forces are at work determined to prevent the truth ever emerging.  The forces acting to frustrate the inquiry are members of Hezbollah or people linked to that organization.

On October 14 Hezbollah and its political ally Amal gathered in strength outside the Palace of Justice in Lebanon’s capital, Beirut, to demand the removal of Judge Tarek Bitar, who is looking into the how and why of the huge blast at the city’s port. They claim the judge is biased against Hezbollah and its supporters.  Shortly after their demonstration began, gunfire echoed around the streets.  At least six people were killed and 32 others injured in the exchange of fire.

The demonstration was an attempt to repeat a winning tactic. Judge Bitar himself is a replacement for the first member of the judiciary appointed to investigate the massive explosion, Judge Fadi Sawan.

On December 10, 2020 Sawan formally charged then-caretaker prime minister, Hassan Diab, and three former ministers, with negligence in connection with the blast.  But Diab, who had been supported by the Hezbollah parliamentary bloc refused to appear for questioning.  So did two of the other former ministers .  They were supported by caretaker interior minister, Mohammed Fahmi, described by Abu Dhabi-based The National as “staunchly pro-Hezbollah”. Fahmi declared publicly that even if the judiciary issued arrest warrants, he would not ask the security forces to execute them.

President Michel Aoun, a Maronite Christian and strong supporter of Hezbollah, made no comment at the time, but in February Sawan was removed from the inquiry to be replaced by Bitar, who was considered non-political.  On July 9 Judge Bitar applied to question Major General Abbas Ibrahim, head of the powerful General Security agency.  Again Fahmi refused the request.  Now the Hezbollah caucus within Lebanon has turned on Bitar.

It seems clear that the government – or at least the Hezbollah-supporting members of it – is deliberately thwarting the investigation.  With two judges pointing the finger at certain ministers and officials, the suspicion must arise that leading national figures were involved in the circumstances leading to the explosion.  Indeed, in a report issued on August 3, Human Rights Watch declared: “The very design of the port’s management structure was developed to share power between political elites. It maximized opacity, and allowed corruption and mismanagement to flourish.”

Attempts to frustrate the official investigation are being met with genuine popular opposition, of which the exchanges of gunfire on October 14 are a clear symptom.

As of yet those involved in the shoot-out have not been identified.  Hezbollah and its political ally Amal accused their long-time opponents, the Christian Lebanese Forces (LF) party, of being behind the attack.  LF leader Samir Geagea condemned the violence, which he blamed on the widespread availability of firearms.  Yet when he was summoned by military intelligence to testify about the clashes, his lawyers claimed that the summons was illegal, and LF supporters blocked roads leading to his home in the northern town of Maarab.  Geagea, who insisted that Hezbollah chief Hassan Nasrallah should testify before him was scheduled to testify on October 27, did not show up. Blatant defiance of authority by national figures suggests a nation weakened to the point of collapse.

Given its precarious position, and the dominance of Hezbollah within its establishment, noArab country could seem further from joining the Abraham Accords than Lebanon.  Yet paradoxically no Arab country could be a more appropriate member.  By its very constitution Lebanon is a pluralist state in which Christians share power with Sunni and Shi’ite Muslims and the Druze .  Leadership roles in the state have by law to be shared between them.  With so strong an Abrahamic approach already embedded in the constitution, it might appear logical for Lebanon to normalize relations with the third Abrahamic faith-based nation in the region – its immediate neighbor to the south, Israel.

Nothing could be further from reality. The ruling cliques, dominated by Iran-supported Hezbollah and its allies, are mired in venality, corruption and self-interest.  Arab News warned recently that their unwillingness to put Lebanon’s interests ahead of their own could destroy the nation.  Because of Lebanon’s constitution, it wrote, “no party can hope to gain power unless it is willing to share power…Regrettably, none of these warring factions possesses the wisdom and foresight to comprehend that, if they continue their current trajectory, the state they seek to monopolize will be no more than a heap of smoking ash.”

If disaster is to be averted, Lebanon has to find a way to throw off the chains that shackle it to the proxy of a foreign power.  The vital question is, can it rid itself of the oppressive dominance of Hezbollah and achieve a corruption-free, democratic future without descending into a new civil war?

Neville Teller’s latest book is “”Trump and the Holy Land: 2016-2020”. He has written about the Middle East for more than 30 years, has published five books on the subject, and blogs at “A Mid-East Journal”. Born in London and a graduate of Oxford University, he is also a long-time dramatist, writer and abridger for BBC radio and for the UK audiobook industry. He was made an MBE in the Queen’s Birthday Honours, 2006 “for services to broadcasting and to drama.”