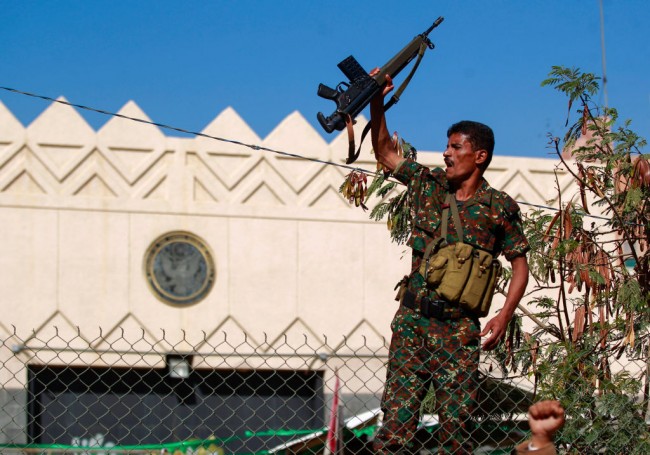 The Iran-backed Houthi rebels stormed the U.S. embassy ( pictured) facility in Sana’a, Yemen, seized many Yemeni nationals as hostages , and stole many pieces of equipment . The US is working to secure the release of the kidnapped hostages and the stolen equipment
Share:

The US State Department is working to secure the release of several kidnapped hostages taken by Iran-backed terrorists just a day after the militant group stormed the U.S. embassy facility in Sana’a, Yemen, U.S. officials told the Washington Free Beacon early Thursday.

A group of Houthi rebels reportedly stormed the U.S. compound on Wednesday seeking “large quantities of equipment and materials,” according to regional reports translated by the Middle East Media Research Institute. The raid comes just five days after the Houthis kidnapped Yemeni nationals who work for the U.S. embassy. “The alleged raid comes after the Houthis kidnapped three Yemeni nationals affiliated with the U.S. Embassy from one of the employee’s private residences in Sana’a on November 5,” according to MEMRI. At least 22 other Yemenis were kidnapped by the Houthis in recent weeks, “most of whom worked on the security staff guarding the embassy grounds,” according to MEMRI.

The State Department confirmed to the Free Beacon that the Yemeni staffers are being detained without explanation and that the Iran-backed militants stole property after breaching the American facility in Sana’a, which housed U.S. embassy staff prior to the suspension of operations there in 2015.

“The United States has been unceasing in its diplomatic efforts to secure their release,” a State Department spokesman told the Free Beacon. “The majority of the detained have been released, but the Houthis continue to detain additional Yemeni employees of the embassy.”

Those still being held are “detained without explanation and we call for their immediate release,” the State Department spokesman said.

Among those who were kidnapped and held by the Houthis include a former embassy employee, an economic officer, and a U.S. Agency for International Development employee, according to MEMRI.

The United States is also “concerned about the breach of the compound” and is calling “on the Houthis to immediately vacate it and return all seized property.”

The Biden administration “will continue its diplomatic efforts to secure the release of our staff and the vacating of our compound, including through our international partners,” the State Department said.

Biden removed the designation of Houthis as a terrorist organization,

The hostage situation is likely to further inflame tensions between the United States and Iran, which arms and funds the Houthi rebels in Yemen. The Trump administration designated the Houthis as a terrorist organization, but that designation was removed when the Biden administration took office—a move that was seen as a goodwill gesture to coax Iran into diplomatic negotiations aimed at securing a revamped version of the 2015 nuclear accord.