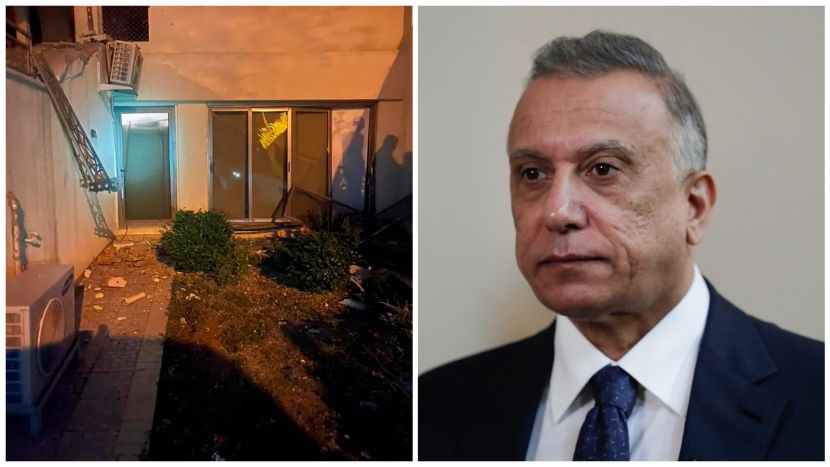 Seven of Prime Minister Mustafa al-Kadhimi’s security guards were wounded in the attack by at least two armed drones in Baghdad’s heavily fortified Green Zone area, according to two Iraqi officials. They spoke on condition of anonymity because they were not authorized to give official statements. Al-Kadhimi suffered a light cut, an aide said. He later appeared on Iraqi television, seated behind a desk in a white shirt, looking calm and composed, with what appeared to be a bandage on his left hand.

“Cowardly rocket and drone attacks don’t build homelands and don’t build a future,” al-Kadhimi said during the television appearance. Later on Sunday, he met with Iraqi President Barham Salih and headed a government security meeting. The sound of an explosion and heavy gunfire echoed across Baghdad from the direction of the Green Zone, which houses foreign embassies and government offices. Handout photos showed the damage to al-Kadhimi’s residence, including smashed windows and doors blown off their hinges.

There was no claim of responsibility for the attack, but suspicion immediately fell on Iran-backed militias who had been publicly attacking al-Kadhimi. They had been blamed for previous attacks on the green zone. The attack came amid a stand-off between security forces and the pro-Iran Shiite militias whose supporters have been camped outside the Green Zone for nearly a month. They gathered after rejecting the results of Iraq’s parliamentary elections, in which they lost around two-thirds of their seats. “The assassination attempt is a dramatic escalation, crossing a line in unprecedented fashion that may have violent reverberations,” wrote Ranj Alaaldin, a nonresident fellow at the Brookings Institution, in a post on Twitter.

Protests turned deadly Friday when the demonstrators tried to enter the Green Zone. Security forces used tear gas and live ammunition. There was an exchange of fire in which one protester affiliated with the militias was killed. Dozens of security forces were injured. Al-Khadimi ordered an investigation. Some of the leaders of the most powerful militia factions loyal to Iran openly blamed al-Kadhimi for Friday’s clashes and the protester’s death. Many of the faction leaders, who together are known as the Popular Mobilization Forces, or Hashd al-Shaabi in Arabic, converged on the funeral held for the protester Saturday.

“The blood of martyrs is to hold you accountable,” said Qais al-Khazali, leader of the Asaib Ahl al-Haq militia, addressing al-Kadhimi in recorded comments to supporters. “The protesters only had one demand against fraud in elections. Responding (with live fire) means you are the first responsible for this fraud.”

On Sunday, several faction leaders dismissed the assassination attempt, suggesting it may be staged. Al-Khazali suggested the militias were being framed and called for an investigation. Other PMF leaders who condemned the attack blamed it on “third parties” seeking to incite strife. In the strongest criticism of the prime minister, Abu Ali al-Askari, a senior leader with one of the most hardline pro-Iran militias, Kataib Hezbollah, questioned whether the assassination attempt was really al-Kadhimi’s effort to “play the role of the victim.”

The “Iraqi News Agency – INA” reported that “the Iraqi security forces found unexploded missiles that fell on the roof of the home of Iraqi Prime Minister .”

The Security Media in Iraq had announced earlier , in a statement that “a failed assassination attempt against Al-Kazemi, by means of a booby-trapped drone, tried to target his residence in the Green Zone in Baghdad,” noting that “Al-Kazemi was not harmed, and he is in a good health”. The statement pointed out that “the security forces are taking the necessary measures in connection with this failed attempt.”

In a related context, Al-Kazemi said , in a statement : The missiles of treachery will not discourage the believers, and not a hair will be shaken in the stability and insistence of our heroic security forces to preserve people’s security, achieve the right and put the law in place.” He stated, “I am fine, praise be to God, among my people, and I call for calm and restraint from everyone, for the sake of Iraq.”