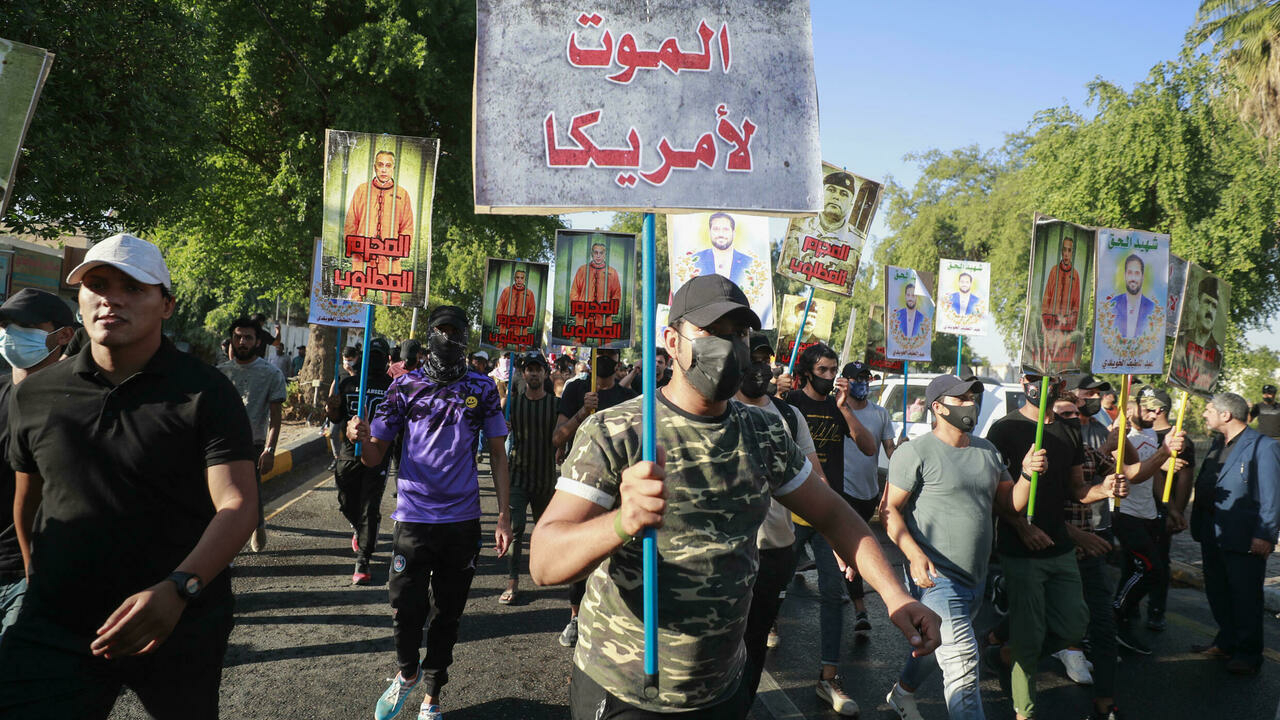 Supporters of Iraq’s pro- Iran Hashed al-Shaabi paramilitary network carry anti-US and anti-Israel placards during a procession towards one of the Green Zone entrances in the capital Baghdad Ahmad Al-Rubaye AFP
Share:

Baghdad (AFP) – Hundreds of supporters of pro-Iranian factions staged a fresh demonstration Saturday in the Iraqi capital over last month’s election results, a day after at least one protester was killed and dozens wounded in a clash with police.

The demonstrations come while Iraq’s numerous political parties negotiate to form coalitions and name a new prime minister after the October 10 elections.

The group’s supporters have denounced the outcome as “fraud” and Iraqi political analyst Ihsan al-Shamari said the pro-Hashed protests are aimed at strengthening its negotiating position during the coalition bargaining process.

In a calm atmosphere a day after deadly tensions, Hashed supporters gathered at one of the four entrances to the high-security Green Zone, which is home to government buildings and the US embassy.

“No to America!”, “No to Fraud!” the demonstrators chanted, as security forces stood by in force.

The protesters had brought in tents and sanitary facilities, in a sign of a possible repeat of a sit-in that began on October 19.

Others burned a portrait of Prime Minister Mustafa al-Kadhemi, whom they called a “criminal”.

On Friday there were clashes with police when hundreds of Hashed supporters rallied near the Green Zone to vent their fury over the election result.

Demonstrators threw projectiles and blocked access to the Green Zone before they were pushed back by police who fired in the air, a security source said, requesting anonymity.

Another security source said a protester died in hospital of his wounds, while the health ministry reported 125 injuries, most of them from the security forces.

A leader of the Hezbollah Brigades, one of Hashed’s most powerful factions, told AFP on Friday that two demonstrators were killed.

On Saturday mourners in the holy Shiite city of Najaf carried two coffins of Hashed supporters they said died in the Baghdad clashes.

According to preliminary tallies, the Iran backed Conquest won around 15 of the 329 seats in parliament, down from 48 it held previously, which made it the second-largest bloc.

Like last time , the big winner this time, with more than 70 seats according to the initial count, was the movement of Moqtada Sadr, a Shiite Muslim preacher who campaigned as a nationalist and critic of Iran.