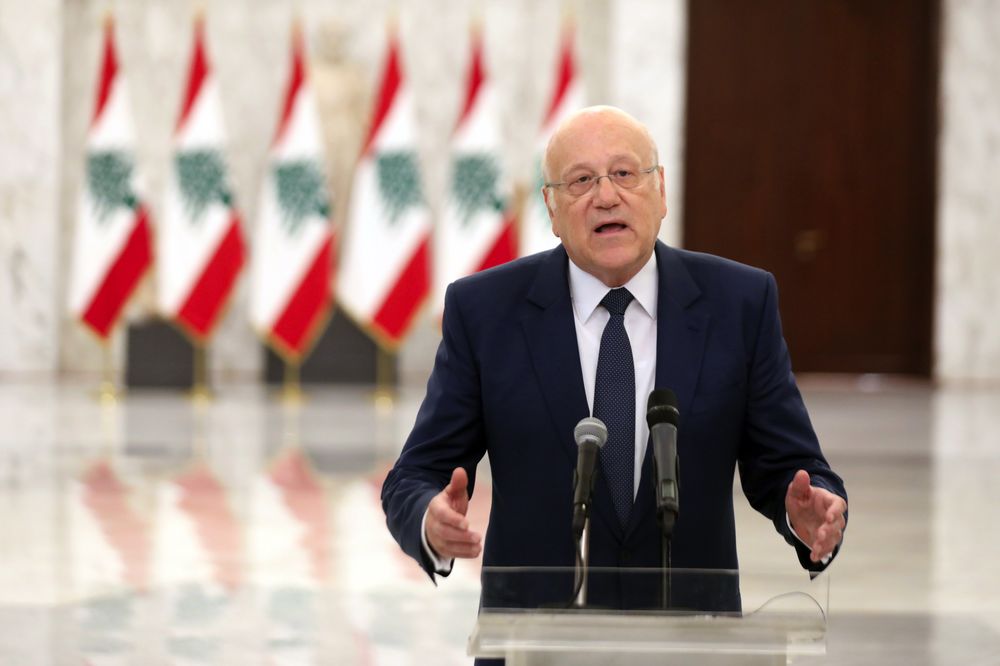 Lebanon’s PM on Thursday again urged the information minister to “do what needs to be done,” an apparent appeal for him step down over an unprecedented diplomatic rift with Saudi Arabia. He also slammed Hezbollah over its anti Arab stand. “Mistaken are those who consider that they can remove Lebanon from its Arab environment, especially from its ties with Saudi Arabia,” Mikati stressed
Share:

BEIRUT — Lebanon’s prime minister on Thursday again urged the information minister to “do what needs to be done,” an apparent appeal for him step down over an unprecedented diplomatic rift with Saudi Arabia. The spat has threatened to destabilize the new Lebanese government and escalate the country’s economic tailspin.

Prime Minister Najib Mikati cannot fire the minister without approval of at least two-thirds of the Cabinet and Lebanon’s president.

“I reiterate my call for the information minister to put national interest first,” Mikati said in a speech from the Grand Serail, shortly after he met in Baabda with President Michel Aoun.

“The information minister’s personal stances have plunged Lebanon into the dangerous position of being boycotted by the Gulf countries,” he said.

Mikati said the information minister’s resignation would help resolve the crisis with the kingdom and its Gulf Arab allies, and preserve the “depths and good relations with the Arab and Gulf countries, especially Saudi Arabia.”

He also slammed his partners in government — Hezbollah and its allies — who have rejected calls on Kordahi to resign.

“We’re determined to address the file of the relation with Saudi Arabi and the Gulf countries according to proper norms and we won’t leave this file to be subject to political bickering and wrangling,” Mikati stressed.

“The government is the right place for discussing files, away from dictations, and no Lebanese party can control the country on its own,” he added, noting that “mistaken are those who think that obstruction and political escalation are the solution. ”

“Mistaken are those who consider that they can remove Lebanon from its Arab environment, especially from its ties with Saudi Arabia,” Mikati stressed, in a possible reference to the Iranian backed militant group which is allied with Kordahi and which has been training the Houthi rebels in Yemen .

To all who love the REAL Lebanon, and believe in honesty, dignity and justice for all – this film is for you. It finally speaks the truth using the voice of the real people of Lebanon inside and outside Lebanon. All of us who have had ENOUGH! We call on you all to view, like, follow and share this video so the world sees how many people care about Lebanon and are willing to take action. The world leaders – @emmanuelMacron @joeBiden @borisjohnsonuk @scottmorrisonmp @bundeskanzlerin @antoniogueterres @kristalina.georgieva @davidmalpass – don’t believe we Lebanese care enough and that we are not prepared to stand up to the liars who have taken our country hostage. We must show them through our actions that we are ready and that we DEMAND that they STOP protecting them and allowing them to make us suffer. ENOUGH IS ENOUGH!

Mikati said on Thursday he had agreed with President Michel Aoun on a “roadmap” to solve a diplomatic row with Saudi Arabia, according to a Lebanese presidency post on Twitter.He did not give details.Lebanon is facing its worst rift yet with oil-rich Gulf Arab states, spurred by comments about the Saudi-led intervention in Yemen made by Lebanese Information Minister George Kordahi before his official appointment. In an interview that was recorded on August 5, Kordahi said Yemen was subjected to aggression and that its Iran-aligned Houthis were defending themselves. Saudi Arabia and some Gulf Arab allies reacted angrily to the remarks.Riyadh expelled Lebanon’s ambassador, banned all imports from Lebanon and recalled its envoy for consultations. Lebanon is suffering a financial and economic meltdown which the World Bank has labeled as one of the deepest depressions of modern history.