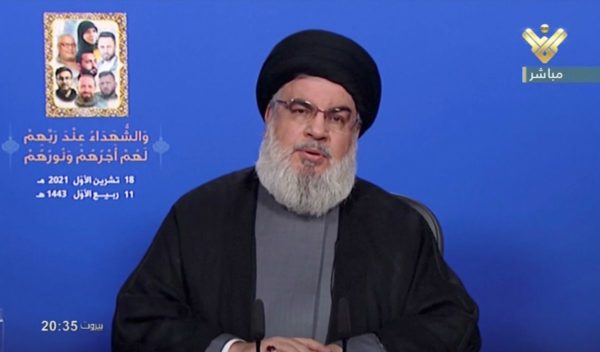 Hezbollah chief Hassan Nasrallah warned Lebanese Forces leader Samir Geagea on Monday the after deadly violence in Beirut last week. claiming that his Iran-backed movement has 100,000 “trained” and “armed” fighters at its disposal.

During a televised speech he accused the Lebanese Forces, one of the largest Christian parties, of being behind the killing of seven members of his movement and Shiite ally Amal at a rally on Thursday and warned it against sparking any “civil war”.

“I am for the first time forced to announce this number,” Nasrallah said, explaining that he revealed how many Lebanese fighters are in his ranks “to prevent war, not threaten a civil war”.

Nasrallah spoke as tensions simmer in Lebanon over the fate of the judge leading a probe into a port explosion last year that killed more than 218 people, wounded thousands and wrecked swathes of Beirut.

Violence broke out in the heart of Beirut Thursday after supporters of Hezbollah and Amal rallied to call for judge Tarek Bitar to step down.

Hezbollah and Amal have accused Lebanese Forces snipers of starting the fight.

But Lebanese Forces leader Samir Geagea has denied this and said on Friday that residents of the Christian neighbourhood of Ain al-Remmaneh had “defended” themselves against “Hezbollah militiamen who tried to enter their homes”.

The sound of gunfire and rocket-propelled grenades left school children cowering under desks and adults hiding inside their homes for hours, for many of the latter reviving memories of street battles during the 1975-1990 civil war.

Nasrallah called for an investigation to determine who was responsible for the bloodshed, “because we don’t leave our brother’s blood on the ground” without doing anything about it.

The Hezbollah chief criticised what he called “bias” in the port blast probe, and “political targeting… of our allies and friends”.

“We are very… very keen to know the truth behind this explosion,” he said.

On Monday last week, he had accused Bitar of politicising the probe and called for an “honest” judge to take over.

The tensions come as Lebanon is mired in one of the world’s worst economic crises since the 1850s.

The dispute over the fate of the lead investigator led to cabinet postponing a session last week, after a new government took office in September following 13 months of political deadlock.

Many fear Bitar will be removed like his predecessor Fadi Sawan was in February.

The second judge has called in top politicians and officials for questioning, but none have appeared before him, instead trying to hamper the investigation at every turn.

Hezbollah is the only militia not to have disarmed after the civil war.

It is designated as a terrorist group by much of the West, but its political branch hold seats in parliament and considerable weight in Lebanese politics.