Lebanon is a model of militias taking over the state 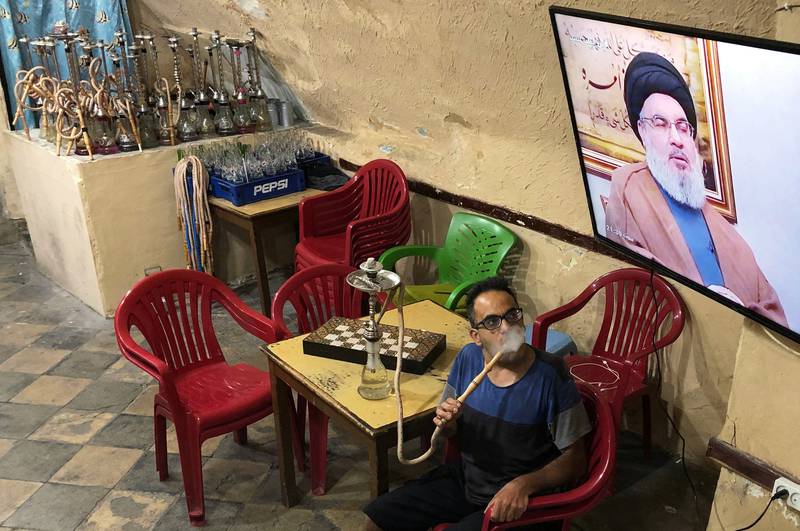 A man smokes a hookah as he watches Hezbollah chief Hassan Nasrallah speak on television inside a coffee shop in the port city of Sidon, Lebanon. Reuters
Share:

By Michael Young, a Lebanon columnist for The National

Throughout the Middle East, armed groups or militias have come to play leading roles in states. In Yemen, the Houthis took over the capital Sanaa and now control large swathes of the country. In Iraq, the Popular Mobilisation Forces, like Moqtada Al Sadr’s Mahdi Army before them, are a major actor in Iraq’s political process and have significant influence over major government decisions.

Yet one country, Lebanon, stands out as a model of how former militia leaders have taken over the state. A majority of sectarian military leaders became pillars of the post-war order at the end of the country’s civil war in 1990. This happened at a time when centralised states were still the norm in the region. But that is no longer true, as countries throughout the Arab world have been shattered by conflict.

Under regular conditions, there is a tendency to see a sharp dichotomy between militia commanders who rule during wartime and civilian leaders who return to power once the fighting ends. However, that’s not what we are witnessing in a number of countries in the Middle East and North Africa today, where non-state actors such as militias have gained the upper hand on state institutions, even taking them over.

Why should Lebanon matter? Precisely because it was the first country to show that militia leaders could be recycled after a war into legitimate national figures, regardless of the crimes they committed during conflict. Leading a militia became a path to social promotion for many individuals previously on society’s periphery.

More importantly, Lebanon institutionalised the authority of former militia leaders by wrapping the state around their interests and turning the country into a host they could feed upon. Where militia leaders had profited from economic networks formed during the war, they now realised that it paid to embrace peace because their financial stakes would be guaranteed, even expanded, in the post-war order.

The way this was done was twofold. Former militia leaders became ministers, giving them access to the massive funds generated by public contracts for reconstruction. They also allied themselves with a class of businessmen and bankers, creating a nexus of power that continues to this day. Businessmen would fund electoral campaigns, in exchange for political backing or a parliamentary seat. Bankers built ties with sectarian leaders in order to protect their financial interests in government decisions.

Throughout the region, plenty of militia leaders can now aspire to pursuing a similar path. More significantly, if the gun can lead to wealth and advancement, this makes it much more probable that post-war periods in several Arab countries will not bring back normality at all. They will encourage efforts by wartime actors to hijack states and perpetuate their power and illicit activity in peaceful settings.

That is what makes the return of functional states so difficult throughout the region. Whether it is Iraq, Syria, Yemen, Lebanon, or Libya, wartime actors have little incentive to restore the powers and institutions of the state. On the contrary, they thrive in environments in which states are weak and they can fill the vacuum.

The costs of such a situation are dramatic, however, and they are bound to get worse. Already, many states in the region are ill-equipped to transition to a post-oil era, in which rentier systems of government are unsustainable. Major challenges, such as climate change, have existential implications in parts of the region. Yet fragmented states will be wholly unable to address such issues.

If Lebanon was a vanguard in militia control over states, it has also proven to be a bellwether of the state collapse that derives from this. The wartime leaders and their business allies have sucked the state dry, so that it is barely able to import basic necessities. Yet the determination of the cartel in power to protect its interests has pushed its members to block all reform, indefinitely prolonging a crisis that should have taken much less time to resolve.

Moreover, militia rule in places such as Iraq and Syria is characterised by debilitating levels of violence to preserve the status quo. Because some of the armed groups are tied to powerful regional actors, governments in place cannot dislodge them. For example, protests in Iraq against Iran’s influence have been met with savage repression, while Syrian militias have maintained a vast ecosphere of exploitation.

In Lebanon, an additional irony is being played out. The post-war system may have been dominated by former militia leaders, but its principal protector today is another militia, Hezbollah, which was not initially part of the post-war carve-up. The former militiamen and businessmen have been reliant on Hezbollah to protect their system, but in the process they threaten to be marginalised.

In other words, systems of rule by former militiamen are inherently unstable because they are not adept at governing states and resolving problems. Hezbollah, which favours such incompetent orders for its own survivability, has come to the rescue of Lebanon’s post-war cartel, because if it were to fail, this would constrain the party’s own margin of manoeuvre.

As Arabs in these countries look at their future, what they see cannot reassure them. To be robbed in peacetime by the same people who persecuted them during wartime is the moral of their story, and their destiny. Until Arab populations push back against such realities, their world will remain a dark corner in the global picture.