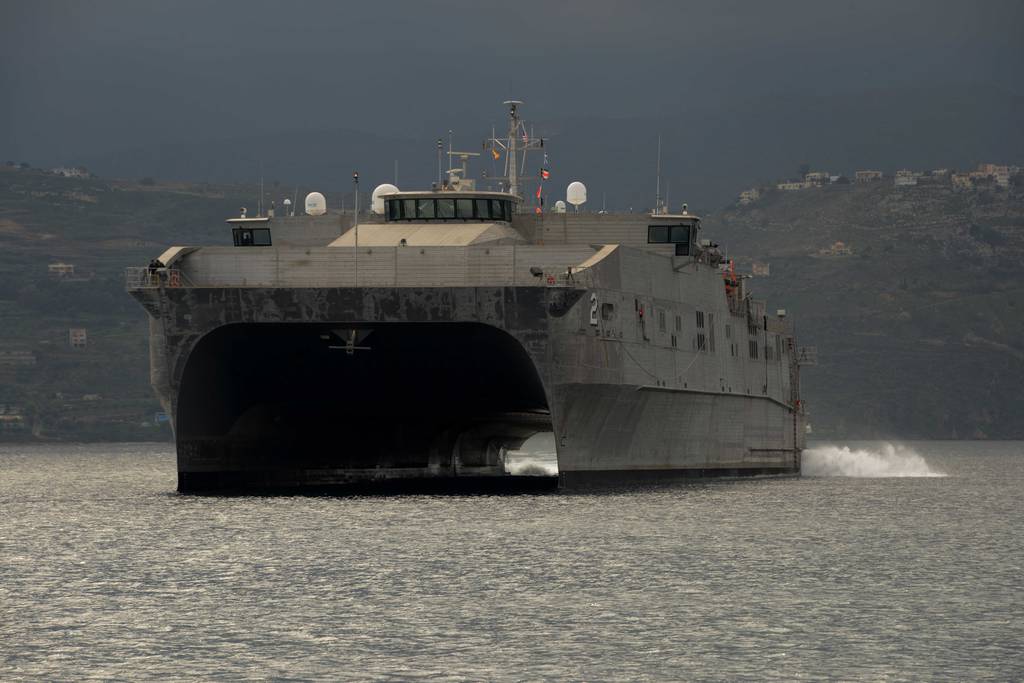 Expeditionary fast transport (EPF) Choctaw County arrived in Beirut today for the exercise, after some personnel flew in last week to prepare for it. About 40 U.S. Navy and military personnel will participate in the event alongside their Lebanese counterparts. The exercise is set to last through Sept. 29.

“The fact that [U.S. Naval Forces Central Command] is conducting its first-ever Central Partnership Station mission is a testament to the success and the effectiveness of those previously established efforts in other regions,” Hawkins said. “We’re doing it in the Middle East because we recognize that there’s an opportunity to build partner capacity as well as do some humanitarian work that is needed.”

During the event, a Seabee construction battalion assigned to Commander Task Force 56 will train their Lebanese counterparts, as will explosive ordnance disposal techs and divers assigned to CTF-52. A maritime engagement team will teach visit, boarding, search and seizure skills to boost maritime security in Lebanese waters. Choctaw County will host a leadership conference during the two-week event to foster a closer military-to-military relationship between the U.S. and Lebanese armed forces.

Among the most important work for the event, though, will be the medical training for humanitarian assistance and disaster relief events. A NAVCENT health engagement team will teach topics including preventative medicine, disaster preparedness and response, drinking water testing and treatment, communicable disease contact tracing and hazmat spill response, Hawkins said. In conjunction with this work, the Navy will also be sending goods to ease humanitarian needs in the area.

Lebanon currently faces many challenges, including Iranian-funded activities by terrorist group Hezbollah, instability and terrorist activity in neighboring Syria, and illegal immigration across land borders with Syria and by sea in the Mediterranean.

Hawkins said building up the Lebanese Armed Forces’ capability and capacity is “critical to maintaining regional maritime security and stability.”

The U.S. Navy has previously conducted partnership station exercise events in locations where its presence is limited. In the past, Africa Partnership Station events have included small boat maintenance assistance, maritime law enforcement training, tactical combat casualty care, medical exchanges and community relations events across the continent. Past Southern Partnership Station events have included EOD and diving training, medical work and even a well-water construction project in the Caribbean as well as Central and South America.

In INDOPACOM, even though the Navy is active in higher-end training and operations alongside its larger naval allies and partners, Pacific Partnership has been a way to collaborate with smaller armed forces in the region in a more approachable and practical way, increasing their military proficiency while also bringing medical and dental services to local populations in need, building up port infrastructures and undertaking other activities that serve the region.

Though the Navy has a much larger presence in CENTCOM than it does in AFRICOM or SOUTHCOM, the inaugural Central Partnership Station exercise comes as the Navy has its smallest obligation to the region in the last two decades. The U.S. mission in Afghanistan is over, and while recent carrier strike groups have dropped ordnance on targets in Iraq and Syria, the demand for carrier aviation is significantly reduced. The Essex Amphibious Ready Group is in CENTCOM now, having recently relieved the Iwo Jima ARG, but as the Pentagon wraps up a Global Posture Review that takes into account post-Afghanistan demands in the Middle East, it’s possible capital ships like aircraft carriers and amphibious assault ships could be spending more time in the Pacific and Europe and less time in CENTCOM.

If that were to happen, it would put more pressure on regional partners to play a larger role in security in the Middle East, which is facing ongoing tensions between Iran and Saudi Arabia that have spilled over into proxy wars and Iranian attacks on merchant traffic; refugee migration due to conflict and climate change; and threats from a range of terrorist groups.

Hawkins made clear the kickoff of Central Partnership Station is unrelated to the drawdown in Afghanistan and in fact has been in the planning stage for months.

“We are looking to do more with our partners in the region, and we think that is critical: military-to-military engagements like these enhance interoperability, they build partner capacity, and that results in improved regional security and stability. That’s the bottom line,” he said. “This is really about our priority here at NAVCENT to strengthen and expand capacity-building with regional partners.”

If this exercise in Lebanon is deemed successful in building up the military’s ability to conduct humanitarian assistance and other operations, the U.S. Navy will likely expand Central Partnership Station into a regular event much like those in the other combatant commands.

“Central Partnership Station includes a series of subject matter expert exchanges between NAVCENT personnel and our Lebanese Armed Forces partners on mine countermeasures, disaster response, public health and construction capabilities. So given that, our measure is whether or not we enhance capability in those areas,” Hawkins said.

“If we see that we had the effect desired and that it was beneficial to furthering the military-to-military relationship with the Lebanese Armed Forces, then we will certainly look to do more in the region with our partners along these lines,” he added.