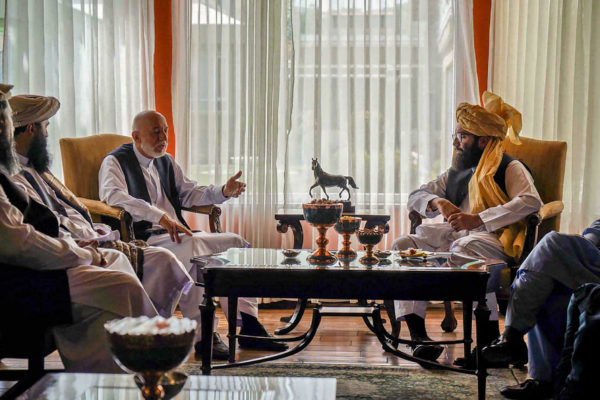 Some of the Taliban’s top leaders are gathering in Kabul to discuss the formation of a new Afghan government — including a representative from the Haqqani network, the country’s most feared militants.

The Haqqanis have been blamed for some of the deadliest attacks in recent years, claiming the lives of civilians, government officials and foreign forces.

Despite their reputation, they are expected to be powerful players in the new regime following the Taliban’s takeover of Afghanistan last week.

The shadowy group was formed by Jalaluddin Haqqani, who gained prominence in the 1980s as a hero of the anti-Soviet jihad. At the time, he was a valuable CIA asset as the United States and its allies such as Pakistan funnelled arms and money to the mujahideen.

During that conflict and following the Soviet withdrawal, Jalaluddin Haqqani fostered close ties with foreign jihadists — including Osama bin Laden.

He later allied with the Taliban who took over Afghanistan in 1996, serving as a minister for the Islamist regime until it was toppled by US-led forces in 2001.

Jalaluddin Haqqani’s death after a long illness was announced by the Taliban in 2018, and his son Sirajuddin formally became the network’s chief.

Thanks to their financial and military strength — and a reputation for ruthlessness — the Haqqani network is considered semi-autonomous while remaining within the Taliban fold.

Mainly based in eastern Afghanistan — with alleged bases across the border in Pakistan’s northwest — the group became more visible in the Taliban leadership in recent years, and Sirajuddin Haqqani was appointed deputy leader in 2015.

His younger brother Anas, once imprisoned and sentenced to death by the previous Afghan government, has held talks with former president Hamid Karzai and ex-chief executive Abdullah Abdullah since the fall of Kabul last weekend.

– Why are they so widely feared? –

The Haqqani network is blamed for some of the deadliest and most shocking attacks in Afghanistan during the last two decades.

They have been designated a foreign terrorist group by the United States, and are also under United Nations sanctions.

The Haqqanis have a reputation for frequently using suicide bombers — including drivers in cars and trucks packed with huge amounts of explosives — and have demonstrated the ability to carry out complex, high-casualty assaults on major targets including military installations and embassies.

In October 2013, Afghan forces intercepted a Haqqani truck in eastern Afghanistan that contained nearly 28 tonnes (61,500 pounds) of explosives, according to the US National Counterterrorism Center.

The Haqqanis have been accused of assassinations — including an attempt against then-president Karzai in 2008 — and kidnappings of officials and Western citizens, for ransom and forcing prisoner exchanges.

They have also long been suspected of links with the Pakistani military establishment — US Admiral Mike Mullen described them as a “veritable arm” of Islamabad’s intelligence in 2011.

The Haqqanis have also hugely contributed to the Taliban’s fighting ranks, and are the group’s “most combat-ready forces”, UN monitors said in a June report.

The monitors also described the network as the “primary liaison” between the Taliban and Al-Qaeda.

– What is their role in the new Taliban regime? –

The Haqqanis have emerged as serious players in the Taliban’s political project with at least two of their leaders in Kabul as talks begin on forming the next government.

And the release of his brother Anas from Afghan custody in 2019 was seen as a move to help kickstart the direct US-Taliban talks that eventually led to the troop withdrawal.

Sirajuddin Haqqani even wrote an op-ed in The New York Times last year, outlining the Taliban’s position on the US talks and the conflict in Afghanistan — though in diplomatic tones that belied the network’s violent reputation.

While Anas Haqqani has held talks with Karzai, his uncle Khalil Haqqani was seen leading prayers in Kabul on Friday.

Sirajuddin and Khalil are both still listed as wanted by the United States, with millions of dollars in bounties on offer.