Aoun continuers to obstruct cabinet formation but blames Mikati instead 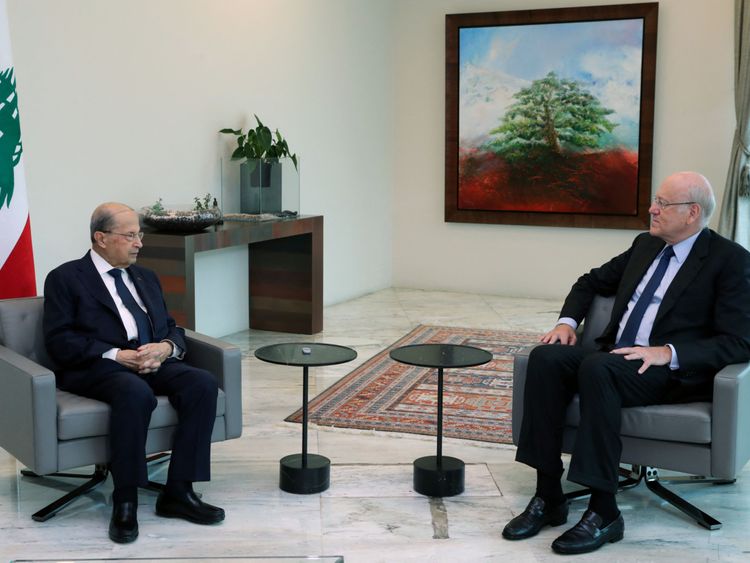 President Michel Aoun is using the same technique he used with former PM Saad Hariri in dealing with Prime Minister-designate Najib Mikati when it comes to obstructing government formation, according to sources familiar with the situation

Like in the case of Hariri he is not admitting that he is behind the obstructions and instead he is accusing Mikati of not wanting to form a government .

On several occasions Aoun accused Hariri of not wanting to form a government .

Asharq al-Awsat newspaper reported on Friday that Aoun is trying to hold Mikati responsible for the delay in the government formation process.

“Aoun is insisting on choosing partisans affiliated with his his son-in-law Gebran Bassil to fill key ministerial portfolios, including the energy portfolio,” the informed source told Asharq al-Awsat .

According to Asharq al-Awsat ’s source, “the government formation is now hitting a dead-end unless Aoun decides to be less rigid and to make way for the selection of ministers who can restore the trust of the Lebanese and address the international community that is refraining from helping Lebanon unless a reform government is formed.”

Aoun is also reportedly insisting on having a blocking one-third” in the cabinet and catering to the “ambitions of Bassil, the most despised politician in Lebanon ” informed sources told the daily .

“Mikati was inclined to declare his resignation prior to his 12th meeting with Aoun but some sides convinced him to postpone that until after the parliament session.”

“Mikati was preparing to visit President Aoun on Wednesday to finalize the cabinet line-up, but amendments carried to him by Presidential Palace Director General Antoine Choucair suggested that President Aoun and his presidential team were seeking to obtain 10 ministers, not seven as they should, which prompted Mikati to realize that this camp is still seeking to get a blocking one-third,” the sources went on to say.

“The declaration by Hezbollah’s chief Hassan on the import of of Iranian fuel increased the government formation complications… because the U.S. Caesar Act would be ready to besiege Lebanon, which does not tempt anyone to form a government in such a situation,” the sources told the Kuwaiti al-Anbaa newspaper in remarks published Friday.