Hezbollah again says it will begin to import fuel from Iran 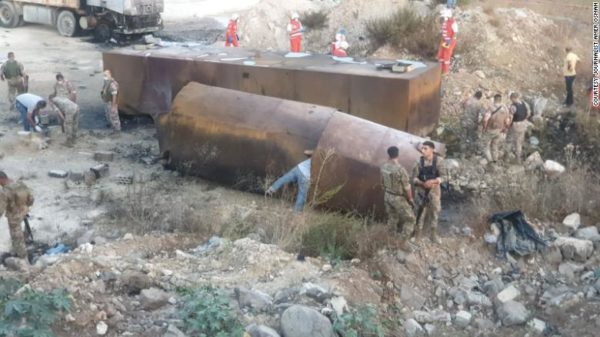 Lebanon fuel tanker explosion kills at least 28 people and wounded dozens in northern Lebanon on Sunday, according to the Lebanese Red Cross. It’s unclear what caused the explosion, but investigation is underway. Lebanon is mired in what the World Bank calls one of the world’s worst economic crises since the 1850s. Severe fuel shortages have crippled businesses and hospitals and caused power cuts that have plunged the country into darkness. The crisis has been exacerbated by politicians repeatedly wrangling over forming a government since the last one resigned in the wake of an enormous explosion at Beirut port in August 2020.
Share:

BEIRUT, Aug 15- Iranian-backed Lebanese group Hezbollah will begin to import gasoline and diesel from Iran, its leader said on Sunday.

Lebanon is experiencing a severe fuel shortage that has caused long lines at petrol stations and extended blackouts. Hospitals, bakeries and other essential facilities have said that dwindling stocks will cause them to shut down.

“I assure you, yes, God willing, we will definitely bring diesel and gasoline from Iran,” Hassan Nasrallah said in a speech, saying the government was no longer able to provide.

In June, Nasrallah had said that all the logistics needed for such a step were ready, and that Hezbollah would be able to do so while bypassing the central bank in order to avoid violating U.S. sanctions.

Nasrallah said on Sunday that Iran had assured him it would stand by Lebanon, and blamed the Lebanese government and American influence for a lack of response to the Iranian offer.

“It’s settled,” he said, adding that he would inform people of the timeline in the next two to three days.

Lebanon Central bank has been subsidizing the import of  fuel but it announced last Thursday that  it will no longer be able to subsidize this commodity .

Central Bank Governor Riad Salameh said last Friday that the citizens didn’t benefit from the subsidy . He was reportedly referring to the fact that Hezbollah has been illegally smuggling  the subsidized products to Syria and making billions in profit . The illegal  smuggling of the fuel to Syria created shortages in Lebanon  and forced Lebanese motorists to sue for hours to get   about 20 liters of fuel.