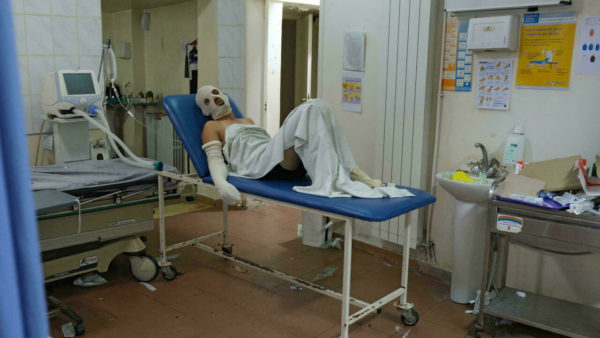 Anger and grief collided in a crowded Beirut hospital Sunday as relatives of burn victims from a fuel tanker explosion in north Lebanon waited breathlessly for news of loved ones.

Geitawi hospital, which has one of the country’s two burn centres, saw an influx of patients injured in the overnight blast that killed at least 28 people in the Akkar district village of Al-Tleil.

Dozens of people had flocked to the village to get petrol, a scarce and increasingly costly resource the army was distributing after confiscating it in efforts to combat stockpiling by distributors.

The official National News Agency said the explosion followed scuffles between residents clamouring to get some petrol, but the exact cause of the blast remains unclear.

The burns unit in Beirut, some 80 kilometres (50 miles) south of the blast site, was seen as a last hope for families turned away from overstretched medical facilities in the north.

Sawsan Abdullah tracked down her son, a soldier, as he was transferred from one hospital to another for treatment after being caught up in the explosion.

She burst into tears at Geitawi hospital when a doctor informed her that her son was in a critical condition.

“You told me he was okay! I want to see him, I only have him, he’s my only son!” she yelled, falling to the floor as relatives rushed to help her.

Speaking to AFP afterwards, she said her son had only been looking for petrol so he could go to his work in the army.

“We live in a failed state, which loves neither its people, nor its soldiers,” said Sawsan, whose husband, who was also a soldier, died in clashes with an Islamist group in north Lebanon in 2000.

Lebanon is grappling with an economic crisis branded by the World Bank as one of the planet’s worst in modern times, and has been hit by severe fuel shortages since the start of summer.

These have aggravated power cuts which now last more than 22 hours a day, threatening hospitals and businesses with closure.

Sawsan’s 26-year-old daughter Sandy blamed the country’s leaders for negligence that led to her brother ending up in hospital.

“He is my only brother, my only support… I have already been denied a father since I was five,” she said.

At the entrance to the hospital’s emergency room, doctors, nurses and even police tried to restrain relatives clamouring to enter.

One man in military fatigues was searching for his brother-in-law, who was still missing in the wake of the blast.

“What am I going to tell my sister?” he yelled.

Another person waiting at the hospital cried: “There are people who have lost two of three relatives.”

Marwa al-Sheikh, 33, had two male relatives caught up in the explosion.

Her brother was being treated for burns in Geitawi, but her brother-in-law, a retired army officer, was still missing.

She could barely hold back her tears.

“My brother-in-law has four children, the eldest is only five years old. We don’t know if he’s dead or if he’s still alive,” she said.

Marwa said some bodies had been charred beyond recognition, so relatives could not determine whether he was among the dead.

“We’ll have to wait for DNA tests,” she told AFP.

The latest tragedy drew inevitable comparisons to last summer’s monster explosion at Beirut port that killed more than 200 people and devastated swathes of the capital.

On August 4, 2020, a stock of carelessly stored ammonium nitrate fertilizer exploded in one of the world’s largest non-nuclear blasts.

Authorities from customs and port officials to senior members of parliament and government had all been accused of being aware of the threat from the cache but had failed to take action.

On Sunday, Geitawi hospital director Pierre Yared said the state was completely absent in the aftermath of the Akkar blast.

“The authorities are not responding to our complaints… the hospitals are in critical condition, we lack everything,” he said.

Uday Khodr, another soldier, ended up in Geitawi after being taken to three other facilities that were unable to treat him. He was badly burned in the blast.

His father Mamdouh waited anxiously in the emergency room for news.

“My son paid a heavy cost for the scarcity of fuel,” he said.

“Where is the country going? Why can’t we live comfortably?”

Mamdouh blamed Lebanon’s leaders for what had happened.

“My son is burning while they destroy this country. I hope their hearts burn too.”