In Lebanon, discontent growing with Hezbollah’s political, military might 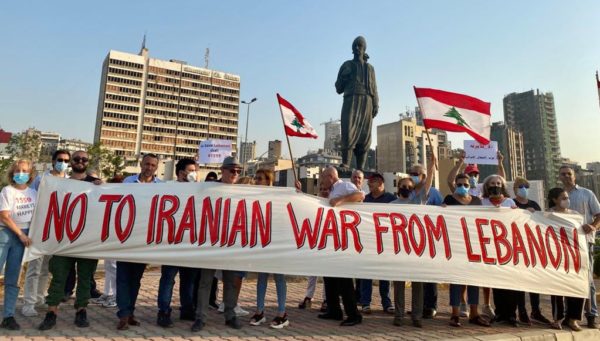 Lebanese protest against Hezbollah’s regional war activity on behalf of Iran : One of the protesters was quoted as saying:” Why is it difficult for some people to understand that citizens at large believe that the decision of war and peace needs to rest with the government and not with a militia? Why is is difficult to understand that citizens will also do anything to ascertain that right? Hezbollah was the only militia allowed to keep its arms when Lebanon was occupied by Syria
Share:

Beirut- There is growing discontent among Lebanese with political and military powerhouse Hezbollah calling the shots in the country.

Analysts say a 2006-style confrontation with Israel, which bolstered its militia image then, is not an option for Iran-backed Hezbollah now, as it’s seen as part of the problem. Even Lebanon’s influential Maronite Catholic Patriarch is calling on the beleaguered country’s army to “confront Hezbollah for the sake of Lebanon.”

Lebanese analyst Dania Koleilat Khatib, with the Issam Fares Institute at the American University of Beirut, said that as “Hezbollah has been accumulating and projecting power, it has simultaneously increased discontent among its opponents and positioned itself as a threat to others,” seen most recently in a revenge killing involving a Sunni Muslim Arab tribe.

Writing in the Saudi Arab News daily, she said the incident “showed that Hezbollah is not as invincible as it once seemed, and that it can be intimidated. This encouraged protesters to chant anti-Hezbollah slogans at the commemoration” last week of the deadly 2020 Beirut bombing, Khatib said, with “fingers pointing at the group for illegally bringing tons of ammonium nitrate into Beirut port.”

Hezbollah leader Hassan Nasrallah has denied that the group has ever controlled Lebanese governments or that it has a majority that would allow it to act on its own, according to the Arab Weekly online publication.

Nasrallah has also repeatedly denied accusations that Hezbollah had maintained an arms warehouse at Beirut port or could be responsible for the tragic port blast. “We have nothing in the port: not an arms depot, nor a missile depot nor missiles nor rifles nor bombs nor bullets nor ammonium nitrate,” he said in a televised speech shortly after the blast.

Angry protests over corruption by the country’s entrenched political elites now feature more public condemnation of Hezbollah, accusing the militia and political party with lawmakers in parliament, of selling out their country to Iran.

Mona Yacoubian of the United States Institute of Peace told London’s Chatham House research group that Hezbollah has evolved from championing the “resistance to Israeli occupation” to becoming “the praetorian guard of Lebanon’s corrupt, cronyist system.”

“Hezbollah over years has increasingly exploited state institutions, parliament, ministries, the civil service, and used its influence to garner power, to spread patronage to gain revenues. It has enmeshed itself into this very corrupt system. In the October 2019 protests and beyond, we see that Hezbollah is no longer viewed as above corruption. It has been tarnished by this behavior even within its own base, that there is growing disaffection. And even its own reaction to the protests, seeking to quell them. What does this say about the trajectory about both the group and the country?”

Lebanon’s influential Maronite Catholic Patriarch Bechara Boutros Al-Rai urged the army during his Sunday Mass to “confront Hezbollah for the sake of Lebanon.”

“We call upon the Lebanese army, which is responsible with the international forces for the security of the south, to take control of the entire lands of the south, … to prevent the launching of missiles from Lebanese territory, not for the sake of Israel’s safety, but rather for the safety of Lebanon,” he said, quoted by Lebanon’s National News Agency.

Al-Rai said that he could not “accept … that a party decides peace and war outside … the national decision entrusted to two-thirds of the members of the government.” He was referring to 19 rockets fired from southern Lebanon into northern Israel on August 6. Some were intercepted and others fell in open spaces. There were no casualties.

Analyst Dania Koleilat Khatib said, “Hezbollah should make the conscious decision to downsize, to dismantle its ‘resistance brigades’ and ask for other armed groups to also disarm in order to secure its own survival and spare Lebanon from a destructive confrontation.”