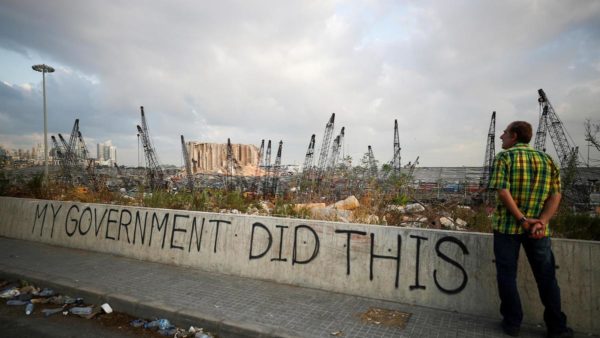 Beirut, Lebanon – Human Rights Watch (HRW) has blasted Lebanese political and security officials for not removing explosive ammonium nitrate that caused a devastating explosion at Beirut’s port last year and said an international investigation and targeted sanctions were the “only path to justice” amid a stalled national probe.

More than 200 people were killed, 6,500 were wounded, and several neighbourhoods were flattened when hundreds of tonnes of highly explosive ammonium nitrate fertiliser stored in the port ignited on August 4, 2020.

Some 2,750 tonnes of the highly explosive material had arrived at the port on Moldovan-flagged ship the Rhosus in late 2013 and were warehoused at the port. For years, senior political and security officials were aware of the shipment, including President Michel Aoun, caretaker Prime Minister Hasan Diab, former ministers and a handful of senior military and security officials.

“Year after year, nothing was done to eliminate the threat,” Lama Fakih, crisis and conflict director at HRW, said at a news conference on Tuesday as the group presented its new report, titled They Killed Us from the Inside, on the eve of the explosion’s first anniversary.

“The evidence overwhelmingly shows that the August 2020 explosion in Beirut’s port was caused by the actions and omissions of senior Lebanese officials who failed to accurately communicate the dangers posed by the ammonium nitrate, knowingly stored the material in unsafe conditions, and failed to protect the public,” Fakih said.

HRW Lebanon researcher Aya Majzoub said regardless of what ignited the ammonium nitrate, Lebanese officials were still to blame.

“They failed to do what was in their authority and responsibility to secure or remove it [the ammonium nitrate],” Majzoub told reporters. “There were no warnings on the potential explosiveness of the ammonium nitrate to the public or to firefighters who responded to the scene and killed.”

A year on, the national investigation into the explosion has stalled.

“In the year since the explosion, procedural and systemic flaws in the domestic investigation have rendered it incapable of credibly delivering justice,” HRW said. “These flaws include a lack of judicial independence, immunity for high-level political officials, lack of respect for fair trial standards, and due process violations.”

HRW said they have documented officials “obstructing the investigation” and “lack of respect for fair trial standards.”

As a result, HRW has asked for a United Nations-mandated investigation into the explosion and called for corruption and human rights-related sanctions to be placed on Lebanese officials involved in human rights violations resulting from the explosion and efforts in undermining accountability.

HRW’s Executive Chairman Kenneth Roth proposed a one-year fact-finding mission, saying the international community has a duty to “step in” if the Lebanese investigation continues to stall.

“A Human Rights Council investigation would not be a criminal trial or even a criminal prosecution,” Roth said. “Rather it would seek to establish the truth about what happened.”