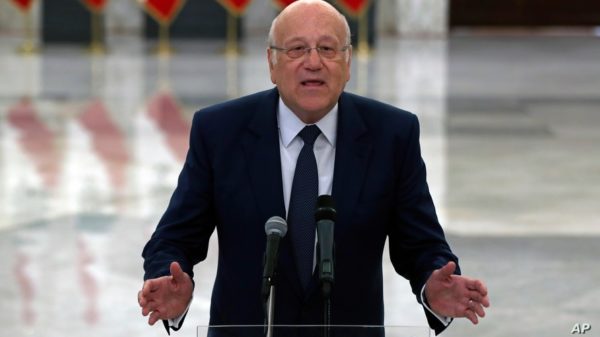 The issue of who will get the ministry ministry in the new government has emerged as the main obstacle in the renewed cabinet formation process, Lebanese media reported on Thursday.

The Interior ministry seems to be ” the mother of all obstacles,”the media added since this government will overseee the election and the ministry of interior is the most important during election time .

“The preliminary format submitted by (PM-designate Najib) Mikati included the allocation of the interior portfolio to a Sunni which is exactly to what (resigned PM-designate Saad) Hariri had proposed and was rejected by Aoun, who insisted on interior, justice and defense at the time,” Al-Liwaa said.

Hariri visited Aoun in Baabda 18 times and faced exactly the same problems for this reason the optimism that surfaced as soon as Mikati was designated to form the cabinet has gradually faded .

According to sources who closely monitor the Baabda Palace , the aging Aoun is no longer capable of making his own decisions and is being manipulated by 2 people : Gebran Bassil on one side and Salim Greisati on the other.

Bassil , who is considered the most despised politician in Lebanon wants to be the president at any cost and for this reason he is pushing Aoun to insist on having the Interior ministry while Greisati who is Hezbollah’s lawyer is pushing Aoun to get the ministry of Justice