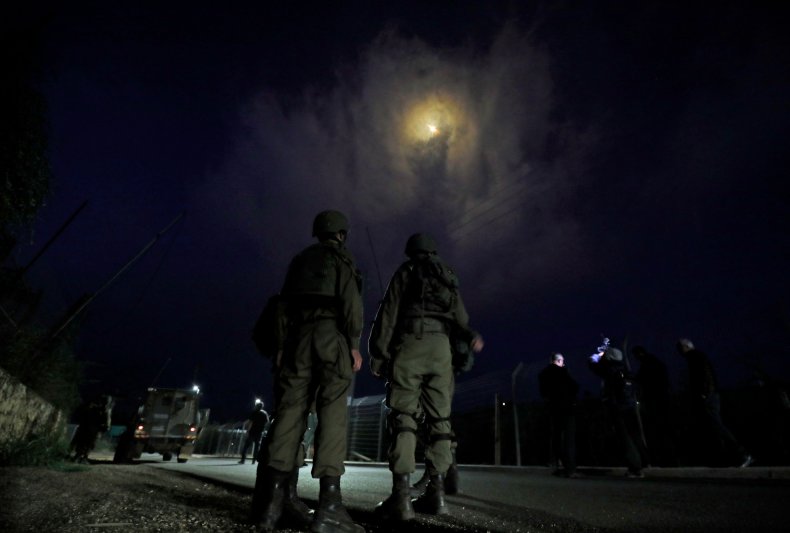 Israeli soldiers stand guard after firing flares above the northern town of Metula, by the border with Lebanon, following a pro-Palestinian protest across the border in the Lebanese Khiam area, on May 14. JALAA MAREY/AFP/GETTY IMAGES
Share:

The Israeli military has said that two rockets were fired into the country from its northern border with Lebanon and retaliated, marking more cross-border unrest hours after Syria accused Israel of conducting airstrikes there.

After reports Monday of explosions in Syria’s northwest, the Syrian Defense Ministry released a statement in which an official source said that “the Israeli enemy carried out an aerial aggression towards southeast Aleppo, targeting some sites in the Al-Safira area” at around 11:37 p.m. local time.”

“Our air defenses confronted the aggressor’s missiles and shot down most of them, and the results of the aggression are currently being assessed,” the statement added

Reached for comment by Newsweek, an Israel Defense Forces spokesperson said that “we do not comment on reports in the foreign media.”

Hours later, the sirens sounded in Israel’s Western Galilee region and the IDF reported that “two rockets were fired from Lebanon into Israeli territory.”

“The Iron Dome Air Defense System intercepted one rocket,” the statement said, referring to Israel’s anti-rocket system, “while the second fell in an open area.”

The statement said that no special Home Front Command guidelines have been issued, indicating no immediate risk of escalation in northern Israel. Shortly after, however, the Israeli military said that “IDF Artillery struck in Lebanese territory.”

Fire from both sides of the border was later confirmed to Newsweek by the United Nations Interim Force in Lebanon, which is tasked peacekeeping along the volatile Blue Line boundary.

“Just before 4 a.m. this morning, UNIFIL radar detected the firing of rockets from an area north-west of Al Qulaylah toward Israel,” the U.N. force said in a statement. “Our radar subsequently detected return artillery fire by the IDF.”

UNIFIL said it was in communication with authorities in both Lebanon and Israel in an effort to prevent further hostilities.

“UNIFIL is in direct contact with the parties to urge maximum restraint and avoid further escalation,” the force said. “Our liaison and coordination mechanisms are fully engaged. Together with the Lebanese Armed Forces, we have increased security in the area and have launched an investigation.”

The exchange of fire between Israeli and Lebanese territory is the latest since May, when three separate barrages of rockets from Lebanon were fired toward Israeli territory amid a severe flare-up between the IDF and Gaza-based Palestinian factions led by Hamas, prompting retaliatory IDF fire. The Israeli military also opened fire on pro-Palestinian protesters that storming the border fence at the time, killing at least one person.

While the 11-day battle ended with a truce mediated by Egypt, violence has continued with incendiary balloons launched from Gaza and Israel conducting at least rounds of airstrikes against the Palestinian enclave.

Incidents have also occurred along the United Nations-patrolled Blue Line between Israel and Lebanon, where the powerful Iran-backed Hezbollah movement operates.

Last week, the IDF said its troops observed a “smuggling attempt using a variety of means, in both overt and covert ways” involving 43 firearms.

“Among other things, the IDF is examining the possibility that the smuggling attempt was carried out with the help of the Hezbollah terror organization,” the statement said at the time, “and is investigating, along with the Israeli Police, the perpetrators of the weapon smuggling attempt.”

On Sunday, the Lebanese Armed Force stated that “an Israeli enemy warship violated the Lebanese territorial waters opposite Ras Al-Naqoura for a distance of about 333 meters.” Shortly after “a similar hostile boat breached the aforementioned sea spot for a distance of about 203 meters, and its members also threw a flare bomb over the aforementioned sea spot” before leaving. The Lebanese military said it had registered a formal complaint with the U.N. Interim Force in Lebanon, the peacekeeping force tasked with preventing conflict at the border.

Rocket fire originating from Syria was also observed by the IDF during the May conflict. In this country too, Iran-aligned militias including Hezbollah and other local and regional actors were active, and operate in support of the Syrian government in the country’s decade-long war against rebels and jihadis.

Israeli officials have also accused these paramilitary forces, however, of also setting up forward operating bases and transferring weapons through Syria, and have conducted hundreds of airstrikes, many of which have gone unclaimed, against their positions.

The latest attack would mark the first known Israeli strike in Syria since Israeli Prime Minister Naftali Bennett succeeded longtime leader Benjamin Netanyahu, who initiated the campaign in Syria. Bennett formerly served as Netanyahu’s defense minister and has expressed ultranationalist views toward Israel’s territorial claims over the lands it occupied in the West Bank, East Jerusalem and Syria’s Golan Heights, which has been under Israel control since the 1967 Arab-Israeli War, one of three regional conflicts involving Israel and Syria, along with other Arab countries.

Bennett also made headlines earlier this month when he traveled to the southern border to inaugurate a monument the South Lebanon Army, an Israel-backed, largely Christian militia that fought throughout and in the wake of Lebanon’s own civil war. The group was ultimately defeated in 2000 after Israeli troops withdrew from southern Lebanon amid a joint offensive conducted by Hezbollah, the fellow Shiite Muslim Amal Movement, Palestinian fighters and other Lebanese parties.

Today, Hezbollah remains the only Lebanese faction other than the country’s armed forces to maintain a significant arsenal, and is believed to possess hundreds of thousands of rockets, as well as a number of more advanced precision-guided munitions the group’s leader, Secretary-General Hassan Nasrallah has threatened to unleash in the event that another war broke out between along the restive border.

Internally, Lebanon also suffers from instability as a worsening economic crisis exacerbated by the COVID-19 pandemic, a port explosion that devastated the capital city of Beirut last August and lingering political paralysis among the country’s elite threatened the supply of essential goods and services nationwide.