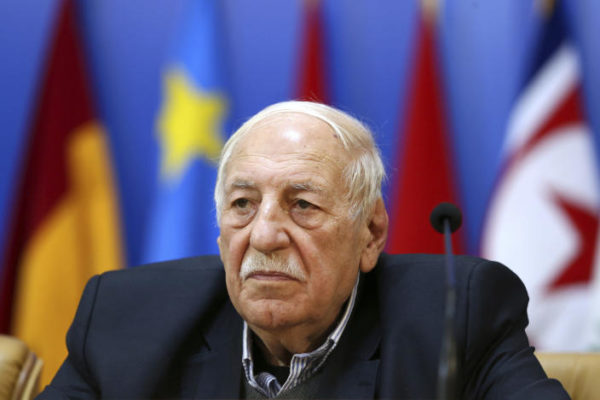 FILE – In this Feb. 21, 2017 file photo, Head of the Popular Front for the Liberation of Palestine-General Command Ahmed Jibril attends a conference titled “international conference in support of Palestinian Intifada” in Tehran, Iran. Jibril, the leader of a breakaway Palestinian faction that carried out hijackings, bombings and other attacks against Israeli targets in 1970s and 1980s, has died in Damascus, his group and Syria’s state TV reported Wednesday, July 7, 2021. He was 83. (AP Photo/Ebrahim Noroozi, File)
Share:

— Ahmed Jibril, leader of a breakaway Palestinian faction that carried out hijackings, bombings and other attacks against Israeli targets in the 1970s and 1980s, has died in Damascus, his group and Syrian state TV reported on Wednesday. He was 83.

The Popular Front for the Liberation of Palestine-General Command said Jibril had been sick for months and died at a Damascus hospital. It didn’t offer details. Khaled Abdul-Mejid, who runs another Damascus-based Palestinian faction, said Jibril suffered from a heart condition.

The son of a Palestinian father and a Syrian mother, Jibril was born in Jaffa in 1938, in what was then British-ruled Palestine. His family later moved to Syria, where he became an officer in the Syrian army and acquired Syrian nationality.

Jibril founded the PFLP in the late 1950s but broke away over ideological disputes. In 1968, he founded the pro-Syrian breakaway PFLP-GC, which briefly joined the Palestine Liberation Organization, but left the umbrella group in 1974, amid sharp disagreements with PLO leader Yasser Arafat.

Jibril was a vehement opponent of peace talks with Israel. His group became known for some of the more headline-grabbing attacks against Israel, including the hijacking an El Al jetliner in 1968 and machine gunning another at Zurich airport in 1969. In 1970, it planted a time-bomb on a Swissair jet that blew up on a flight from Zurich to Tel Aviv, killing all 47 on aboard.

The Damascus-based group also carried out attacks against Israel from its bases in Lebanon. During Israel’s 1982 invasion of Lebanon, the PFLP-GC captured three Israeli soldiers and negotiated their release in exchange for more than 1,100 Palestinian, Lebanese and Syrian prisoners in 1985. One dramatic attack in 1987 was carried out by two of his fighters who crossed from Lebanon into Israel on hang-gliders and killed six Israeli soldiers. The attack was considered as one of the triggers for the first intifada.

The group is considered a terrorist organization by the United States and other Western countries.

Jibril’s son Jihad was killed in an attack in 2002 in Beirut, for which the group blamed Israel. He was head of the PFLP-GC military wing at the time.

Jibril is survived by four daughters and three sons.