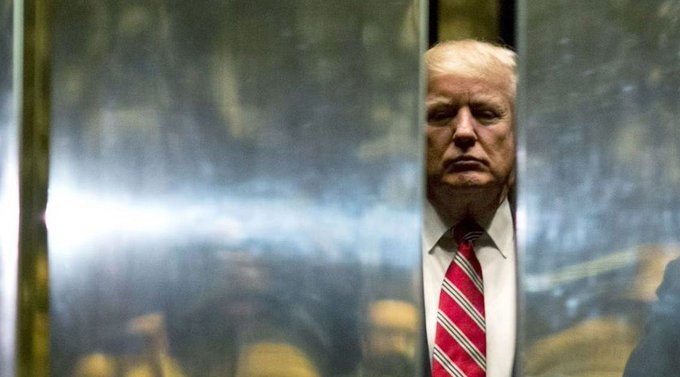 That executive, Allen Weisselberg, also faces charges for financial crimes, including grand larceny in the second degree. That crime alone could bring a 15-year prison sentence.

Weisselberg has pleaded not guilty.

The decision to bring serious charges against Weisselberg, who is 73 years old and spent decades working at high levels of the Trump Organization, has been viewed by outside legal observers as a way to pressure him to cooperate with the broader investigation. Trump’s eponymous business was central to building his media stardom and his political persona — as well as the subject of intrigue by his skeptics and detractors

The indictment unsealed Thursday focuses on how the Trump Organization provided some top executives with fringe benefits and other perks.

It alleges that Weisselberg and several top executives received valuable perks that they did not pay taxes on. Those perks included private school tuition, apartments, and cars. Weisselberg is charged with evading payments on more than $900,000 in city, state and federal taxes due to the scheme, the indictment alleges. It also alleges he received more than $133,000 in tax refunds that he wasn’t entitled to. Prosecutors allege that the scheme ran over the course of 15 years.

The former president and members of his family were not indicted. Investigators have said their work is ongoing.

The courtroom held dozens of masked spectators, mostly press, seated one seat apart under social distancing protocols. The hearing took less than half an hour. Vance and James both attended the court hearing, arriving together and sitting next to each other in the front row. They departed together at the end of the proceedings, without comment.

Weisselberg was led into the 11th floor courtroom in handcuffs, then unshackled before the hearing began.

“If the name of the company was something else, I don’t think these charges would have been brought,” Alan Futerfas said, arguing that similar matters are typically handled in civil court.

And Ron Fischetti, Trump’s personal lawyer, said in a statement that it was a “sad day” for Vance’s team.

“After years of investigation and the collection of millions of documents and devoting the resources of dozens of prosecutors and outside consultants, this is all they have?” he said. “In my 50 years of practice, I have never seen this office bring a case like this and, quite frankly, I am astonished. The District Attorney is supposed to be apolitical, but everyone knows that the only reason they are proceeding with this case is because it is ‘Trump’. As far as we are concerned, this case is over.”

Weisselberg’s indictment may also disappoint Trump’s political opponents, who for years hoped his tax returns would include evidence of criminal activity that could put the former president himself in personal legal jeopardy.

Trump did not respond to reporters’ shouted questions about the New York case as he visited Texas on Wednesday, but later issued a terse statement via his Save America PAC.

“Do people see the Radical Left prosecutors, and what they are trying to do to 75M+++ Voters and Patriots, for what it is?” Trump said.

Earlier in the week, the former president blasted the New York prosecutors as “rude, nasty, and totally biased,” and said his company’s actions were “standard practice throughout the U.S. business community, and in no way a crime.”

The White House did not weigh in directly on the expected indictments, although deputy press secretary Karine Jean-Pierre told reporters aboard Air Force One on Thursday that President Joe Biden “has made clear that it’s long past due for the wealthiest Americans to pay their fair share.”

Vance’s office has looked into alleged “hush-money” payments paid to women on Trump’s behalf and the company’s property valuations and tax assessments, among other matters.

Weisselberg, 73, came under scrutiny, in part, because of questions about his son’s use of a Trump apartment at little or no cost. Barry Weisselberg, who managed a Trump-operated ice rink in Central Park, testified in a 2018 divorce deposition that Trump Park East apartment was a “corporate apartment, so we didn’t have rent.”

Barry’s ex-wife, Jen Weisselberg, has been cooperating with both inquiries and given investigators reams of tax records and other documents.

Duncan Levin, Jen Weisselberg’s lawyer, told POLITICO that his client made the case possible. She met with prosecutors numerous times to discuss the perks her ex-husband’s family members received.

“The case is a very serious one involving millions of dollars of fringe benefits having been paid out in lieu of salary,” Levin said, “and Jen Weisselberg was privy to firsthand conversations about the payment of some of these fringe benefits, and she reported those conversations to prosecutors.”

“The fact that these charges are coming now is indisputably the direct result of the work that Jen Weisselberg has done in putting together leads for the prosecutors and providing documents to them to support these charges,” Levin added. “I think that her cooperation has been invaluable to them, and we are very gratified to see them moving forward.”

The Trump Organization is the business entity through which the former president manages his many entrepreneurial affairs, including his investments in office towers, hotels and golf courses, his many marketing deals, and his television pursuits.

Trump’s sons, Donald Jr. and Eric, have been in charge of the company’s day-to-day operations since he became president.

James Repetti, a tax lawyer and professor at Boston College Law School, said a company like the Trump Organization would generally have a responsibility to withhold taxes not just on salary, but other forms of compensation — like the use of an apartment or automobile.

Such perks wouldn’t be considered taxable income if they were required as a condition of employment, Repetti said — including providing an apartment for the convenience of an employee who is required to be at the office or worksite at odd or frequent hours, or allowing the use of a car for business purposes.

Another prominent New York City real estate figure, the late Leona Helmsley, was convicted of tax fraud in a federal case that arose from her company paying to remodel her home without her reporting that as income.

“The IRS routinely looks for abuse of fringe benefits when auditing closely held businesses,” Repetti said. “The temptation for the business is that it claims a tax deduction for the expense, while the recipient does not report it in income.”

Regardless of whether a jury finds the company guilty or innocent, the indictment could be a body blow. Many banks and lenders refuse to do business with entities that are under indictment. And many loans include clauses saying the banks can force borrowers to pay them back immediately if they are criminally charged. Eventual exculpation will not reverse those financial consequences, which is why many prosecutors are hesitant to charge companies.

Speaking to reporters, Futerfas said “we’re certainly hopeful that there will not be significant effects” on the Trump Organization’s business operations due to Thursday’s charges.