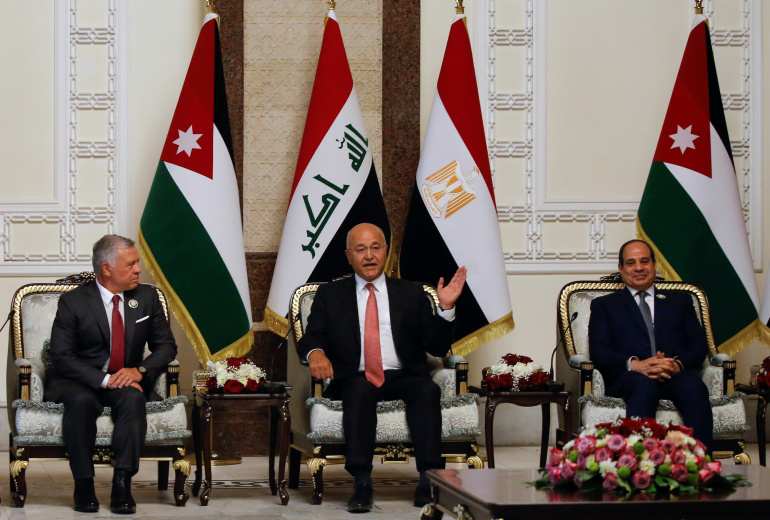 The first Gulf War ruptured diplomatic relations between Iraq and Egypt, but these have improved in recent years with senior officials from both countries exchanging visits.

The summit comes within the framework of the tripartite cooperation mechanism between the three countries, which held its first round in Cairo in March 2019.

On Sunday, the three leaders discussed several areas of regional interest, including the recent development on the Palestinian issue, combating terrorism and economic cooperation, an Egyptian presidency statement said.

“The leaders stressed the need to intensify consultation and coordination between the three countries on the most important regional issues,” it added.

The meetings are seen partly as an attempt to neutralise Iran’s influence across the region. Al-Kadhimi also aims to shore up regional alliances and bolster Iraq’s standing in the Middle East as a mediator.

It recently hosted Iranian and Saudi officials in Baghdad in April, their first high-level meeting since Riyadh cut diplomatic ties with Tehran in 2016.

“This visit is an important message to our people that we are mutually supportive and unified to serve our people and the people of the region,” al-Kadhimi said, according to a statement from his office.

Al Jazeera’s Mahmoud AbdelWahed reporting from Baghdad said the summit was not only of economic significance but also a political one.

“There is partly an intent from Egypt and Jordan apparently to bring Iraq back to an Arab coalition … and also to make use of the fortunes in Iraq in order to build or create some mutual trade and investment and development projects,” he said.

Iraqi Foreign Minister Fuad Hussein said in a press conference following the meeting that a wide range of topics had been discussed, including economic and political cooperation, large-scale industrial projects, and trade in medicine and agricultural pesticides.

The talks, which were welcomed by the US, also covered regional issues including the Syria crisis, the conflict between Israel and the Palestinians, and the war in Yemen.

“Iraq must be isolated from regional interventions,” Jordan’s Foreign Minister Ayman Safadi told reporters after the meeting, in an apparent reference to Iran’s influence in the country.

Ethiopia’s Grand Renaissance Dam project, which Egypt fears will imperil its water supply, was also discussed, he added, and all three countries agreed that a political solution and the return of refugees was needed to end the Syrian crisis.

“The message from the leaders is we stand together in the face of these challenges,” he said.

Iraq has already signed key economic and trade agreements with both Jordan and Egypt.

In November, Egypt signed 15 memorandums of understandings that spanned sectors from oil to construction and trade. Jordan imported 10,000 barrels a day of oil from Iraq, but this was halted due to coronavirus restrictions.

Iraq is also planning to build a pipeline that is meant to export one million barrels per day of Iraqi crude from the southern city of Basra to Jordan’s Red Sea port of Aqaba.