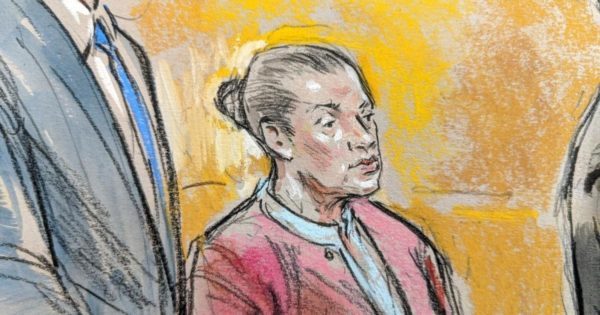 A linguist working for the Defense Department was sentenced to a 23-year prison term on Wednesday for giving classified information exposing U.S. intelligence sources to a Lebanese national who  passed it on to the Lebanese militant group Hezbollah.

Mariam Taha Thompson, 62, of Rochester, Minn., worked as a contract linguist at an overseas U.S. military facility where she had top secret government security clearance

Starting in 2017, Thompson admitted she started communicating with a Lebanese citizen with family members in Lebanon’s Interior Ministry and with personal ties to Hassan Nasrallah, the leader of Hezbollah, and developed a romantic interest in him — though they never met in person.

With full knowledge that any such information would be transferred to senior Hezbollah officials in Lebanon, according to federal prosecutors, Thompson accessed dozens of classified files listing names, personal information and photographs of intelligence sources who aided the U.S. in locating Suleimani, as well as cables that detailed the information these sources supplied Washington with.

The information Thompson provided so pleased an unnamed senior Hezbollah commander that he wanted to meet with her in person when she visited Beirut.

“That Thompson passed our nation’s sensitive secrets to someone whom she knew had ties to… Hezbollah made her betrayal all the more serious,” stated Assistant Attorney General John C. Demers for the Justice Department’s National Security Division.

Thompson, who pleaded guilty to the charges in March, could have faced a maximum sentence of up to life imprisonment. However U.S. District Judge John D. Bates cut her sentence, citing that the Lebanese-born Thompson was a sympathetic figure with an otherwise “inspiring” life story who had served her adopted country alongside U.S. troops in Afghanistan and elsewhere, the Washington Post reported. But the judge also cautioned that no defendant in such an espionage case where identities of sources were revealed ever got less than 15 years.  Thompson also believed that if she did not hand over the classified information to the Lebanese national that her relationship with him “would come to an end” and he “would not marry her,” CBS reported.

Hezbollah, which was designated as a foreign terrorist organization by the U.S. government in October 1997, is a Shia Muslim militia backed by Iran and was formed in 1982 following the invasion of southern Lebanon by Israel with the aim of removing Israeli Defense Forces from the country.

Hezbollah has engineered many attacks on U.S., Israeli and western targets over the years, including the October 1983 bombing of military barracks in Beirut that killed 307 people, including 241 U.S. military personnel. Hezbollah has since grown into a significant force in Lebanese politics, holding onto 12 seats in the 128-member parliament in the most recent election in 2018. Suleimani, the Iranian general killed by U.S. drone strikes last year, was described by the Middle East Eye publication as an “invaluable” ally to Hezbollah.