Lebanon’s crisis threatens one of its few unifiers, the army 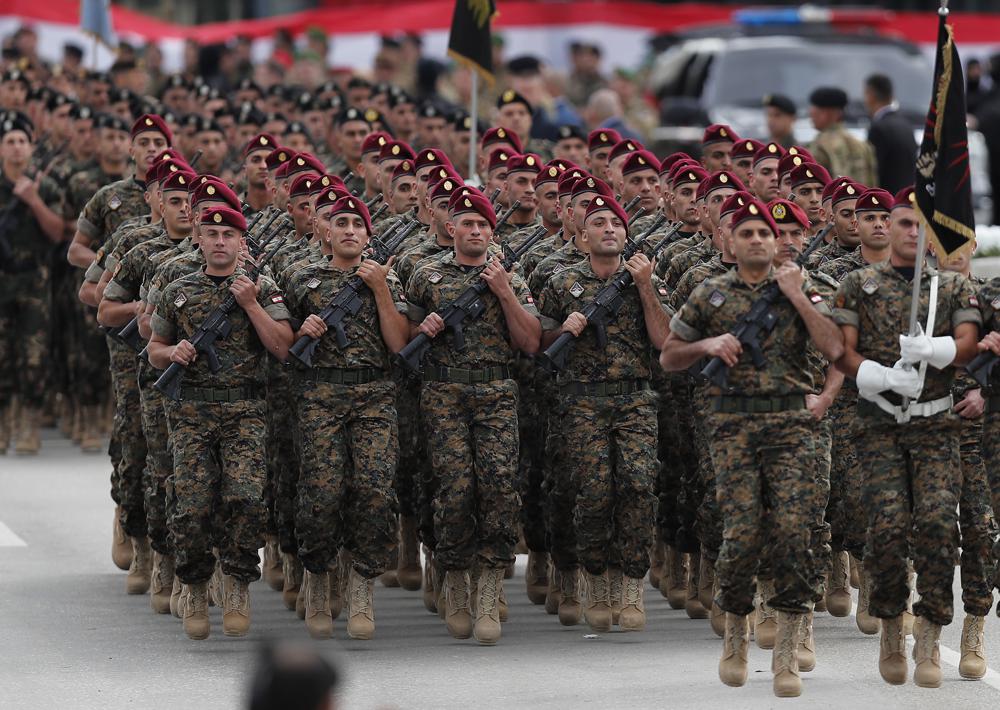 File – in this November 22, 2018 file photo, Lebanese army special forces march during a military parade to mark the 74th anniversary of Lebanon’s independence from France in downtown Beirut, Lebanon. The currency collapse has wiped out the salaries of the U.S.-backed Lebanese military, placed unprecedented pressure on the army’s operational capabilities with some of the highest attrition rates over the past two years, and raised concerns about its ability to continue playing a stabilizing role while sectarian tensions and crime are on the rise. (AP Photo/Hussein Malla, File)
Share:

BEIRUT (AP) — Since the civil war, through wars with Israel, militant bombings and domestic turmoil, Lebanese have considered their military as an anchor for stability, one of the only institutions standing above the country’s divisions.

But the military is now threatened by Lebanon’s devastating financial collapse, which the World Bank has said is likely to rank as one of the worst the world has seen in the past 150 years.

The economic meltdown is putting unprecedented pressure on the U.S.-backed army’s operational abilities, wiping out soldiers’ salaries and wrecking morale. The deterioration puts at risk one of the few forces unifying Lebanon at a time when sectarian tensions and crime are on the rise amid the population’s deepening poverty.

“Such a decline could be harbinger of the kinds of instability not seen since the last time Lebanon’s political elites gutted or set adrift the Lebanese armed forces, namely in the five years leading up to the 1975-1990 civil war,” said Aram Nerguizian, senior advisor of the Program on Civil-Military Affairs in Arab States at the Carnegie Middle East Center.

The military itself has raised the alarm, unusual for a force that is perhaps unique in the Middle East in that it largely remains outside politics.

Army chief Gen. Joseph Aoun warned in a speech to officers in March that soldiers were “suffering and hungry like the rest of the people.”

He also openly criticized the political leadership, which has been paralyzed by infighting and has done almost nothing to address the crisis. “What are you waiting for? What do you plan to do? We have warned more than once of the dangers of the situation,” he said — a startling comment since army officers are not allowed to make political statements.

A senior army official confirmed to The Associated Press that the economic situation has greatly affected morale. “There is no doubt that there is great resentment among the ranks of the military,” the official said.

The official noted that “many duties are demanded of the military,” including maintaining internal stability. “The leadership is worried over developments in the security situation on the ground and the ability to deal with this issue,” the officer said, speaking on condition of anonymity in line with regulations. Supporting the army is crucial to avoid Lebanon falling into chaos, he added.

France is convening a virtual fundraising conference Thursday seeking emergency aid, after army chief Aoun visited Paris last month pleading for assistance. France warned that Lebanon’s military “may no longer be able to fully implement their missions which are essential to the country’s stability.” The U.S., the army’s largest backer, has pledged to increase aid in 2021.

The military in part counterbalances Hezbollah, the Iranian-backed Shiite faction that boasts a powerful armed force as well as political dominance. Nerguizian warned that degradation of the military would allow Hezbollah to loom even larger — an outcome few outside Lebanon, particularly in Washington, want to see materialize.

It could also open the door for countries like Russia, China, Iran or Syria to co-opt the force and find ways to influence it.

Gen. Frank McKenzie, the commander of U.S. Central Command said earlier this month that the U.S. is committed to supporting the Lebanese army.

“They’re one of the elements of the Government of Lebanon that actually functions very well, and we believe they should continue to be the sole expression of military power of the state in Lebanon,” he said.

After decades of corruption and mismanagement by the political elite, Lebanon’s economy began to disintegrate in October 2019. The once-thriving banking sector has collapsed, and the currency has lost around 90 percent of its value to the dollar on the black market. More than half the nation h as been plunged into poverty.

Equally hit are the 80,000 members of the military. Before the crisis, an enlisted soldier earned the equivalent of about $800 a month, but that has now dropped to less than $100 per month. Officers’ salaries are higher but have also dropped in value, now about $400 a month.

The army has tightened spending. A year ago, it announced it would stop offering meat in meals given to soldiers on duty. It still offers free medical treatment, but those in the force say the quality and effectiveness has sharply deteriorated.

“Morale is below the ground,” said a 24-year-old soldier who quit the force in March after five years of service.

He said that by the time he left, the 1.2 million Lebanese pounds salary he received was barely enough for food, cigarettes and transportation. He spoke on condition of anonymity, fearing reprisals.

Mohammad Olayan, who retired two years ago after more than 27 years in the military, told The Associated Press that his end-of-service pay has been wiped out by the crash. Instead of a decent retirement, he now must take odd jobs to sustain his 12-year-old twin girls.

“What incentive is there for young soldiers?” he asked. “I sacrificed so much for my country and look how I ended up because of this mafia,” he said, referring to politicians.

Nerguizian said that while overall cases of desertion remain relatively low, the force has seen increased instances of dereliction of duty, high AWOL rates and more moonlighting by personnel to augment salaries.

The last three years have also seen some of the largest attrition rates, with personnel choosing to leave the military, he said. “More worryingly, the force is losing quality officers and noncommissioned officers – the gray matter and capabilities the force has spent more than a decade and a half developing,” Nerguizian added.

After Lebanon’s 15-year civil war broke out in 1975, the army split along sectarian lines. It reunited in the early 1990s under the command of Gen. Emile Lahoud, who later became the president.

Since then, it has become one of the most professional militaries in the Middle East. The U.S. has given it more than $2 billion since 2007, hoping to build a bulwark against Hezbollah’s power — though the aid is far below the around $3 billion a year it gives to Israel’s military.

The military is also one of the few state institutions that enjoy respect among the Lebanese public, in contrast to their politicians, so mired in infighting they haven’t been able to form a government since October.

During anti-government demonstrations that swept the country in late 2019, videos of soldiers overcome by emotion as they confronted protesters were widely shared on social media.

Elias Farhat, a retired Lebanese army general who is currently a researcher in military affairs, said he did not believe the collapse scenario is now possible.

“This is not an army’s crisis but a country’s crisis. In the past there were major security problems that affected the army and led to its disintegration,” he said, referring to the civil war.