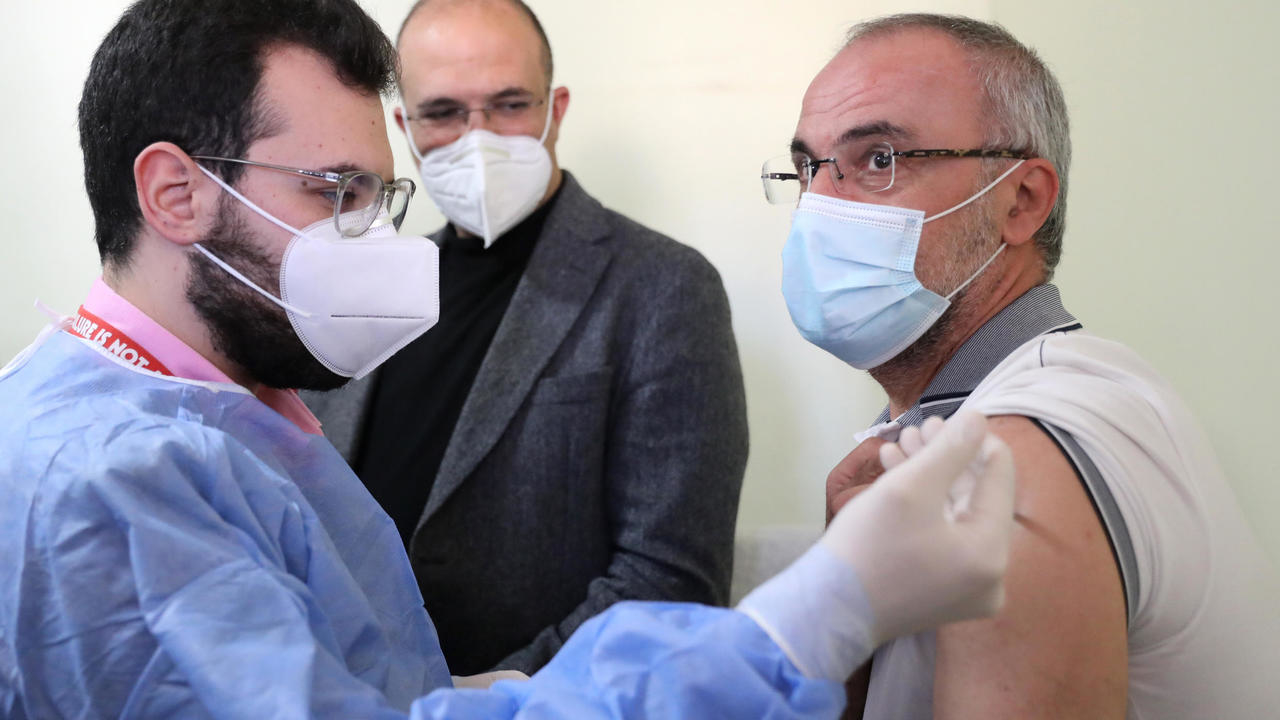 Lebanon’s caretaker health minister Hamad Hassan watches as a teacher is vaccinated under the government’s Covid inoculation scheme. For those who do not qualify but are ready to pledge their votes, there are politicians ready to provide the jabs ANWAR AMRO AFP/File
Share:

Lebanon’s cash-strapped leaders are bribing their base with free Covid-19 jabs ahead of next year’s elections, in what observers say is the latest variant on an old corruption trick.

The “vaccine for vote” system builds on decades-old patronage practices that have seen leaders buy their way into office by offering voters money or public sector employment.

But with state resources stretched to their limit by a severe economic crisis and international aid dwindling due to a failure to deliver promised reforms, politicians are turning to Covid jabs to stock up on political capital.

“Political forces are trying to directly or indirectly make themselves a part of the equation with regards to the vaccine campaign, primarily because it is a profitable investment,” said a member of the state-run National Vaccination Committee who spoke on condition of anonymity.

Prime minister-designate Saad Hariri, a leading figure in Lebanon’s Sunni community, organised a countrywide vaccination campaign with the help of his Future Movement in early May.

More than 7,000 people received at least one dose of the Russian Sputnik V vaccine, said spokesperson Abdel Salam Moussa. Tens of thousands of new jabs are expected to arrive in the coming weeks, he told AFP.

The Free Patriotic Movement (FPM), founded by President Michel Aoun, and its Christian rival the Lebanese Forces, have also distributed jabs through private initiatives organised by members or affiliates.

Elias Bou Saab, a lawmaker close to the FPM, rented out a private hospital outside Beirut until March next year for vaccination purposes.

Last month, he said he would provide “20,000 doses of the Pfizer vaccine to be distributed free of charge”.

Antoine Habchi of the Lebanese Forces provided jabs for 1,600 people in the eastern region of Baalbek. “The funds were raised from the diaspora,” he told AFP.

The Lebanese government, with the help of international agencies, provides free jabs of the Pfizer or AstraZeneca vaccine on a priority basis.

It started its vaccination campaign in February, but the rollout was initially slow, forcing many, including political leaders, to turn to private suppliers providing Sputnik doses.

With more than half the population living below the poverty line and the Lebanese pound sliding rapidly against the dollar on the black market, vaccines are a luxury for many.

Two Sputnik doses are sold to companies and associations for $38, which amounts to 500,000 Lebanese pounds at the black market rate, or around three quarters of the minimum wage.

Firas, a former insurance broker, had registered along with his wife for state-sponsored vaccination.

But when a political party offered him free jabs, he chose not to wait for the government.

“I have been unemployed for six months. How would I have afforded vaccines for two people?” said the 52-year-old, who declined to name the party that sponsored his Sputnik dose.

Out of nearly 900,000 people who have received vaccines in Lebanon, nearly 60,000 benefited from party handouts, said Mohamad Haidar, a health ministry adviser.

The powerful Hezbollah movement, an Iran-backed party that boasts major welfare institutions, including several hospitals, says it is not distributing vaccines.

With health minister Hamad Hassan hailing from its ranks, Hezbollah can rely solely on the state, said political scientist Hilal Khashan of the American University of Beirut.

According to a 2019 report by Transparency International, nearly one in two people in Lebanon is offered a bribe in return for their vote, while more than one in four receives threats if they do not comply.

With traditional party leaders going up against a revitalised opposition in elections next year, vaccine handouts could be “exploited for political ends,” said Julien Courson, the director of the Lebanese Transparency Association.

But vaccines aren’t the only honey pot.

Food prices in Lebanon have soared by up to 400 percent as of December and medicines are fast disappearing from pharmacy shelves.

Political patrons are stepping in to ease the blow.

The FPM will launch a platform for medicine exchange that will primarily benefit party supporters, said Marwan Zoghbi of the party’s coronavirus committee.

People with a surplus of a certain medicine will be matched with those who are in need, he said.

Hezbollah, which has long offered a wide array of social services, said in April that it is boosting the number of supporters who benefit from assistance.

But with Lebanon’s woes piling up quickly, political parties across the board will struggle to keep up.

“Lebanese clientelism is failing because the political system does not have material resources to dispense to sectarian leaders,” said Khashan.

“The pervasive poverty attests to the failure of the system and the inability of confessional leaders to provide for their impoverished followers.”