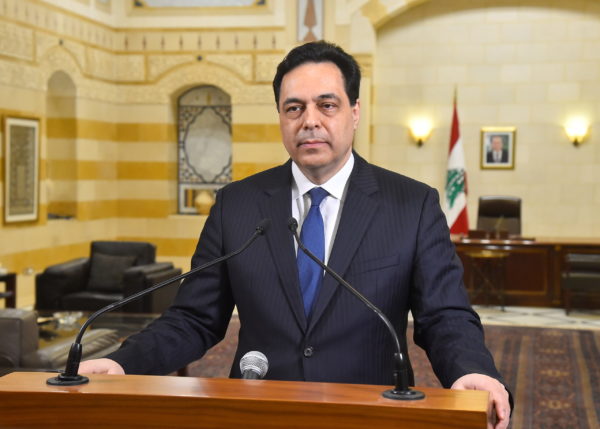 Lebanon is “in the heart of great danger”, and needs friendly countries to save it, the caretaker prime minister, Hassan Diab, said on Wednesday.

“Either you save it now before it’s too late or else no regrets will help,” Diab said in a televised address. Lebanon is in the throes of a deep financial crisis that is posing the biggest threat to its stability since the 1975-1990 civil war.

Diab has been steering the government in a caretaker role since his cabinet resigned in the aftermath of the Aug. 4 Beirut port blast, which devastated large swathes of the capital, killed hundreds of people and injured thousands.

Prime Minister-desginate Saad al-Hariri has been at loggerheads with President Michel Aoun over naming cabinet ministers for ten months as the country hurtles towards economic collapse. A new government capable of introducing reforms is necessary to unlock much needed foreign aid.

“I call on political powers to present concessions, and those will be small no matter how big they may seem, because that will alleviate the suffering of the Lebanese and stop this frightening path,” Diab said.

Under a sectarian power-sharing system, Lebanon’s president must be a Maronite Christian and the prime minister a Sunni Muslim. Aoun, a Christian, is an ally of the Iran-backed Shi’ite movement Hezbollah, listed as a terrorist group by the United States.

Hariri, a veteran Sunni politician, has said the only way out of Lebanon’s crisis is through mending relations with its Arab neighbors. Gulf states, including Saudi Arabia, have been reluctant to offer aid to ease Beirut’s economic woes, keeping their distance while alarmed by the rising influence of Hezbollah.