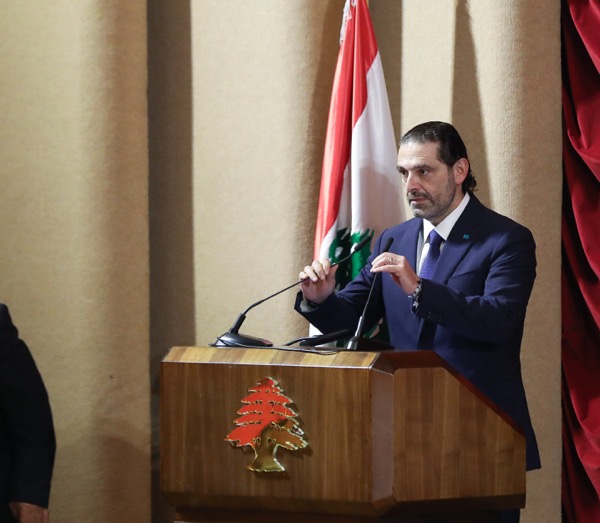 Lebanon’s prime minister-designate Saad al-Hariri told the Lebanese Parliament on Saturday that he will not form a cabinet that simply caters to President Michel Aoun’s wishes and that he will only form the kind of government needed to stop collapse and prevent the big crash that is threatening the Lebanese Photo credit Dalati & Nohra
Share:

Lebanon’s prime minister-designate Saad al-Hariri said on Saturday he will not form a cabinet that simply caters to President Michel Aoun’s wishes.

“I will not form a government as the team of his Excellency the President wants it, nor any other political faction. I will only form the kind of government needed to stop collapse and prevent the big crash that is threatening the Lebanese,” Hariri told a parliament session on Saturday.

The parliament session ended with the speaker calling on Hariri to form a cabinet with the approval of Aoun.

Aoun did not intend to revoke prime minister designate Saad Hariri’s mandate when he wrote to parliament last week declaring that Hariri could not form a government, Aoun’s son-in-law said on Saturday.

Hariri was nominated in October to form a cabinet after Hassan Diab’s government resigned in the wake of the Beirut port explosion which killed over 200 people , damaged large swathes of the capital and wounded thousands .

But Hariri and Aoun have been at loggerheads for months over cabinet positions, blocking the formation of a government. Diab and his cabinet have stayed on in a caretaker capacity, but investors worry that without a new government in place, reforms cannot be enacted to end a financial crisis.

In a letter read out to parliament on Friday, Aoun said Hariri could not form a cabinet. This was seen by some politicians as an effective declaration that someone else would have to be found to take the role of prime minister.

“The purpose is not to take back the designation from the prime minister-designate,” Bassil told a parliament session convened to discuss the letter.

Speaking to lawmakers, Hariri said he would not choose a cabinet to suit the aims of Aoun.