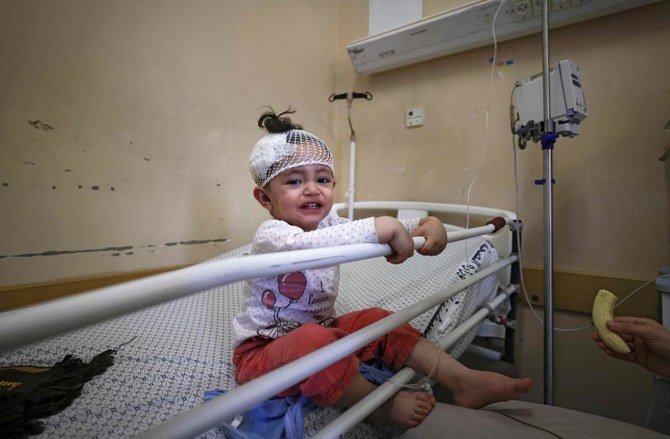 A Palestinian girl, who was wounded in overnight Israeli air strikes on the Gaza Strip, receives treatment at Al-Shifa Hospital in the Palestinian enclave. (File/AFP). UN chief Guterres calls Gaza ‘hell on earth’ for children
Share:

Israeli fighter jets continued to pound the Gaza Strip on Thursday, killing at least one Palestinian and wounding several more as Prime Minister Benjamin Netanyahu defied calls for a de-escalation.

At least 232 Palestinians, including 64 children, have been killed in 11 days of violence.

On the Israeli side, 12 people, including two children, have been killed.

United States President Joe Biden on Wednesday discussed the events in Gaza with Netanyahu, telling the caretaker leader that he expected “a significant de-escalation today on the path to a ceasefire”.

But shortly after Biden’s phone call, Netanyahu said he was “determined” to continue bombarding Gaza until Israel’s “aim is met”.

The UN Security Council’s efforts for a truce between Israel and Gaza’s Hamas rulers remain stalled, meanwhile, with the US continuing to veto action on the issue.

Here are the latest updates

US President Joe Biden spoke today with President Abdel Fattah el-Sisi of Egypt, with the two leaders discussing efforts to achieve a ceasefire in Gaza.

They agreed that their teams would stay in constant communication toward that end and the two leaders would stay closely in touch.

US isolated at UN

The United States on Thursday defended its efforts to broker a ceasefire in renewed fighting between Israel and Palestinian militants after Washington found itself isolated at the United Nations over its opposition to any Security Council action.

“We have not been silent,” US Ambassador to the United Nations Linda Thomas-Greenfield told the 193-member UN General Assembly as it met to discuss the violence.

“In fact, I don’t believe that there’s any country working more urgently and more fervently toward peace.”

A journalist for Israeli a right-wing media outlet was fired on Wednesday for lamenting that no Arabs were killed after a rocket launched reportedly from Lebanon landed in a northern Israeli city, local Israeli media said.

“One [rocket] has fallen on a soccer field in a large Arab community. Regretfully for us, it did not result in mass deaths there,” commentator Kobi Finkler said in a live broadcast for Channel 20, his remarks receiving widespread criticism, according to Haaretz newspaper.

The station said it “decided to immediately sever its its connection with Mr. Finkler  and summon those involved in the broadcast to clarify matters and draw conclusions”.

Journalist Sami Abu Salem reporting from Gaza said several explosions were heard in the past hour, with reports suggesting a government compound was hit.

Turkish Foreign Minister Mevlut Cavusoglu brushed aside the “both sides” arguments for the ongoing violence in Israel and Palestine, maintaining Tel Aviv is the sole responsible party.

Speaking during a UN General Assembly session on the situation in Israel and Palestine, Cavusoglu said blame must be assigned “where it belongs”.

“Israel alone is responsible for what is happening today in Jerusalem, West Bank and Gaza,” he said.

Tunisia, a member of the UN Security Council criticised Israel Thursday for the killing of children in its attack on the Gaza Strip.

“How many children will lose their lives?,” Tunisian Foreign Minister Othman Jerandi asked at the UN General Assembly’s emergency meeting.

“What crime could be worse than killing innocent children, including infants?”

“We are in Gaza city, next to the UN headquarters, [and we are] hearing jet fighters and drones moving,” he said.

“We’ve just heard also some bombing from the Israeli marine in the western side [of Gaza].”

Al Jazeera correspondent Hoda Abdel-Hamid, reporting from Ramallah, said Palestinians are not very hopeful with the diplomatic efforts, and the continuing UN meetings.

“The feeling among the common Palestinians on the streets, especially the youth … [is not to] believe in anything, any more,” she said.

“They wouldn’t be listening to what’s happening now. They would listen if someone comes in with some firm, hard piece of news.”

Reporting from the United Nations headquarters in New York, Al Jazeera’s Kristen Saloomey says that despite strong statements from individuals, no unified statement is expected from the General Assembly.

“We are seeing individually very strong statements, as a group, we do not expect any unified statement from the General Assembly, just like we have to see yet one from the Security Council,” Saloomey added.

“Efforts are ongoing … to come to some sort of an outcome statement, but we were told by the Palestinian ambassador and representative from the Organisation of Islamic Cooperation, who called this meeting, that their first priority was to shine a light on the ongoing situation and amplify calls for a ceasefire.”

‘Atmosphere of anticipation’ for Palestinians towards ceasefire: Correspondent

Al Jazeera’s correspondent Hoda Abdel-Hamid, reporting from Ramallah, said there was an “atmosphere of anticipation” towards a ceasefire and mixed feelings.

“So far we haven’t had any official indication is that the ceasefire is imminent, even though it’s kind of out there,” she said.

“A ceasefire will be welcomed but a lot of Palestinians [are wondering] … what will [we] get out of it, are we going to get the status quo, is nothing going to change?”