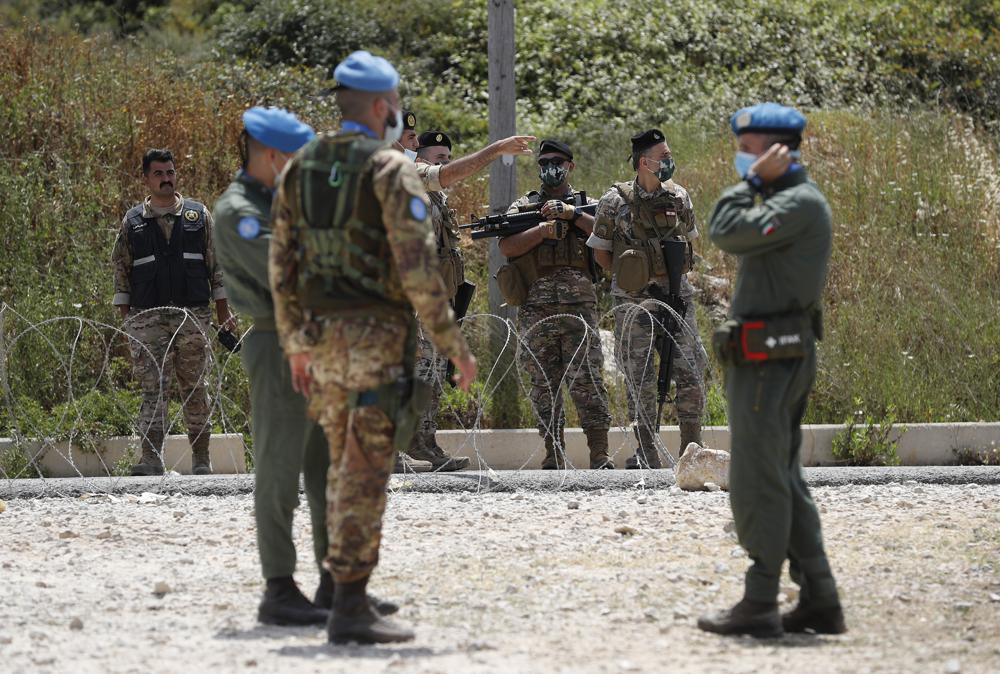 Italian U.N. peacekeepers, with blue berets, and Lebanese soldiers, background, stand guard on a road that leads to a U.N. post along the border known as Ras Naqoura, where Lebanese and Israeli delegations are meeting, in Naqoura, Lebanon, Tuesday, May 4, 2021. Lebanon and Israel have resumed indirect talks with U.S. mediation at the U.N. post over their disputed maritime border after nearly a six-month pause. (AP Photo/Hussein Malla)
Share:

NAQOURA, Lebanon (AP) — After a nearly six-month pause, Lebanon and Israel on Tuesday resumed indirect talks with U.S. mediation over their disputed maritime border. Disagreements among the Lebanese leadership over the small country’s claims prevailed.

The talks ended after five hours with no official statement. Hours later, Lebanon’s President Michel Aoun said his country’s delegation should negotiate with no preconditions, calling on his delegates to uphold the previously agreed upon claim of 860 square kilometers (330 square miles) of the Mediterranean Sea.

Israeli Energy Minister Yuval Steinitz’s office said late Tuesday that he “was updated by the delegation on the details of the meeting and made a consultation regarding the continuation of the process.”

Lebanon’s delegation, made up of a mix of army officers and experts, had expanded the small country’s claim in talks late last year, drawing up maps that push for an additional 1,430 square kilometers (550 square miles) for Lebanon. The talks then broke down, only to resume Tuesday.

“President Aoun gave his instructions to the delegation not to go on negotiating with pre-conditions, but to adopt international law which would be the basis for guaranteeing continued negotiations to reach a fair and just resolution,” Aoun said after meeting with the Lebanese delegation, according to a statement from his office.

Both Lebanon and Israel, technically at war, claim about 860 square kilometers (330 square miles) of the Mediterranean Sea as being within their own exclusive economic zones.

Lebanon, experiencing an unprecedented economic crisis, is eager to resolve the border dispute with Israel, paving the way for potential lucrative oil and gas deals.

Talks were expected to resume Wednesday, according to a person familiar with the negotiations who spoke on condition of anonymity because they were not authorized to address the media. Experts predicted the difference of positions among the Lebanese is likely to weaken the country’s negotiating edge.

The resumption after the six-month hiatus comes after a new U.S. administration took over. Lebanon has sunk deeper into economic and financial crisis that started in late 2019 — a culmination of decades of corruption and mismanagement by the political class.

The talks were held at a U.N. post along the border known as Ras Naqoura, on the edge of the Lebanese border town of Naqoura. The Lebanese delegation speaks through U.N. and U.S. officials to the Israelis.

The U.S. has been mediating the issue for about a decade, but only late last year was a breakthrough reached on an agreement for a framework for U.S.-mediated talks. The talks began in October but stopped few weeks later.

Israel and Lebanon have no diplomatic relations.

Lebanon’s leadership has not been united behind the army command’s decision regarding the extended area. Aoun, the president, had refrained from signing a draft bill that included Lebanon’s new expanded claim of maritime borders.

“There is weakness in the Lebanese stance and it is important for the Israelis to join the talks when Lebanon is in a weak position,” said Laury Haytayan, a Lebanese oil and gas expert.

Israel already has developed a natural gas industry elsewhere in its economic waters, producing enough gas for domestic consumption and to export to Egypt and Jordan.

Lebanon, which began offshore drilling earlier this year and hopes to start drilling for gas in the disputed area in the coming months, has divided its expanse of waters into 10 blocs, of which three are in the area under dispute with Israel.

Israel and Lebanon also held indirect negotiations in the 1990s, when Arab states and Israel worked on peace agreements. The Palestinians and Jordan signed agreements with Israel at the time but Lebanon and Syria did not.