It is official: Biden declares slaughter of Armenians a “Genocide” 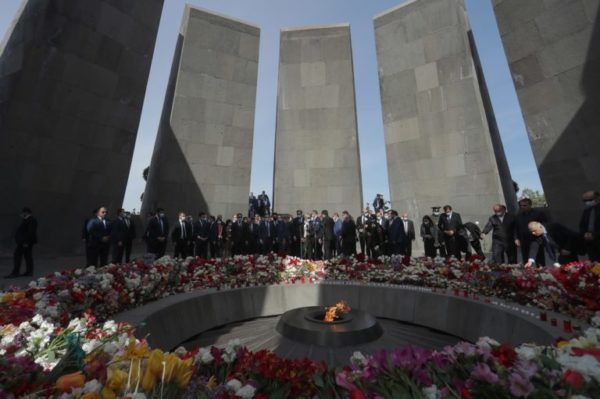 President Biden on Saturday declared the mass slaughter of Armenians at the hands of Ottoman Turks more than a century ago a “genocide,” bucking pressure from Turkey’s government as well as decades of precedent to describe the atrocity as one that was ethnically motivated.

“Each year on this day, we remember the lives of all those who died in the Ottoman-era Armenian genocide and recommit ourselves to preventing such an atrocity from ever again occurring,” Biden said in a statement.

“Let us renew our shared resolve to prevent future atrocities from occurring anywhere in the world,” the president said. “And let us pursue healing and reconciliation for all the people of the world.

“The American people honor all those Armenians who perished in the genocide that began 106 years ago today,” he concluded.

The government of Turkey said Biden’s step would “open a deep wound that undermines our mutual trust and friendship.” The Armenian National Committee of America said the president’s declaration “has ended a century-long era of American complicity in Turkey’s denials.”

Estimates suggest that up to 1.5 million Armenians were killed or deported in the violence unleashed by the Ottoman Empire in modern-day Turkey starting on April 24, 1915. Turkey has consistently rejected the general consensus of historians and the Armenian people about classifying the event as a genocide, insisting instead that the toll has been inflated and that those killed were victims of civil war and unrest.

With the announcement, which came on Armenian Genocide Remembrance Day, Biden becomes the first sitting U.S. president to formally call what happened a genocide. Previously, the closest a president had ever come to making that designation was when Ronald Reagan made reference to “the genocide of the Armenians” in a 1981 proclamation remembering victims of the Nazi Holocaust.

The relationship between the United States and Turkey has chilled in recent years, and the decision to label the slaughter of Armenians a genocide could further strain diplomacy between the two nations. Yet after four years in which the U.S. commitment to human rights faced frequent criticism under former President Donald Trump, the Biden administration has set out early to signal a new tone — with Saturday’s announcement marking just the latest example.

Biden spoke with Turkish President Recep Tayyip Erdogan on Friday, the White House said, but a readout of the call did not say whether the president talked about the Armenian killings with Erdogan.

Both chambers of Congress passed resolutions in 2019 declaring the massacres a genocide, and in recent weeks Biden has faced growing bipartisan calls to follow suit. A March letter signed by 38 members of the Senate urged Biden “to officially recognize the truth of the Armenian Genocide,” while a letter signed by more than 100 House members on Wednesday said the “shameful silence of the United States Government on the historic fact of the Armenian Genocide has gone on for too long.”

As a candidate for president last year, Biden reiterated his support for recognizing the mass slaughter as a genocide — a cause he had also supported during his time in the Senate.

“We must never forget or remain silent about this horrific and systematic campaign of extermination. And we will forever respect the perseverance of the Armenian people in the wake of such tragedy,” he wrote in a 2020 Medium blog post, explicitly calling the wave of violence a genocide.

Turkey continues to vehemently reject the genocide label. In a Thursday statement pre-empting the anniversary and possible Biden remarks, Erdogan said Turkey “will continue to defend truths against the so-called Armenian genocide lie and those who support this slander with political motivations.”

Turkish Foreign Minister Mevlut Cavusoglu responded to Biden in a tweet on Saturday saying, ” ‘Words cannot change or rewrite history.’ We have nothing to learn from anybody on our own past. Political opportunism is the greatest betrayal to peace and justice. We entirely reject this statement based solely on populism.”

Members of the Armenian American community praised Biden for his remarks.

“President Biden’s principled stand on the Armenian Genocide today — powerfully overriding Ankara’s foreign veto against honest American remembrance of this crime — pivots America toward the justice deserved and the security required for the future of the Armenian nation — a landlocked, blockaded, genocide-survivor state,” Armenian National Committee of America Chairman Raffi Hamparian said in a statement.