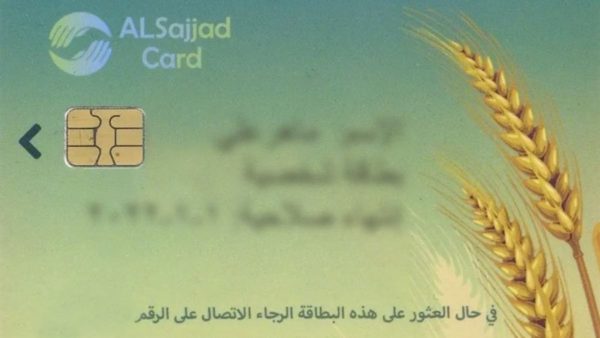 Hezbollah ration card for use in Hezbollah’s Al Sajjad supermarket chain . Hezbollah is promoting the card within the Shiite community
Share:

The Lebanese Shiite group Hezbollah has launched a chain of supermarkets that are stocked with Syrian, Iraqi and Iranian products at reduced prices that are accessible with a party-issued card. It’s a welcome initiative in a country crippled by a financial crisis and food shortages. But critics say it’s yet another bid by the powerful Shiite movement to win loyalty by providing services in a weak state and oversee a parallel economy.

As the people of Lebanon grapple with a series of acute economic, social and political crises, accompanied by high inflation and food shortages, the pro-Iranian Hezbollah movement recently opened several supermarkets in its various strongholds in Beirut, the Bekaa region and the country’s south, in a bid to quell public anger. Food in Lebanon is not just overpriced but often impossible to find.

The supermarket chain – named “Al-Sajjad”, for the imam Ali Al-Sajjad, a figure of Shiite Islam known for his generosity – sells Syrian, Iraqi and Iranian products, a party official told FRANCE 24. “To be able to shop in these supermarkets, you have to have a card issued by Hezbollah,” said the official, who asked not to be named. To be eligible for the card you must earn less than 1,500,000 Lebanese pounds per month (about $125 on the black market), he explained.

The supermarket chain – named “Al-Sajjad”, for the imam Ali Al-Sajjad, a figure of Shiite Islam known for his generosity – sells Syrian, Iraqi and Iranian products, a party official told FRANCE 24. “To be able to shop in these supermarkets, you have to have a card issued by Hezbollah,” said the official, who asked not to be named. To be eligible for the card you must earn less than 1,500,000 Lebanese pounds per month (about $125 on the black market), he explained.

In Lebanon, more than half of the population now lives below the poverty line and the national currency has lost more than 80 percent of its value.

#Hezbollah is starting a chain of supermarkets named "Al-Sajjad" which provides products with minimal costs as to help the Lebanese people overcome the severe economical crisis accompanied by currency collapse, and insane increase in prices #Lebanon is witnessing. pic.twitter.com/UuRVFPUDCC

“Anyone in need can shop with us, regardless of their religious affiliation and even if they are not Hezbollah supporters,” the official said. But for now, most of the customer base is from the Shiite community, and the new initiative has raised eyebrows.

For months, Hezbollah has been accused of facilitating the smuggling of essential food products to Syria, including sugar and flour, thereby contributing to the emptying of store shelves and depriving the Lebanese of the same basic products that it now sells in its stores.

Hezbollah has not said how many people have cards allowing them to benefit from its supermarkets, but the number is estimated to be over 8,000.

Residents sought out by Hezbollah

Lina, a 40-year-old, single and unemployed woman living in a small village in the Bekaa valley, said she hadn’t asked for the card, but received a visit from Hezbollah party members who offered it to her. Her name, like those of the other people interviewed for this article, has been changed to protect her identity.

“The stores look like large depots and are always fully stocked. I was able to buy milk, rice, sugar and vegetable oil at reduced prices,” Lina said, adding that she was not a member of Hezbollah. “Anybody with an Al-Sajjad card is entitled to a certain quantity of products every month, including five kilos of rice, five kilos of sugar, five litres of cooking oil, four kilos of washing powder, three packs of pasta, four cans of tuna, or even two bottles of dishwashing detergent,” she said.

Hassan, a 39-year-old teacher and father of two living in Nabatieh in the south, also said he had been approached by Hezbollah members from his village who offered to give him an Al-Sajjad card.

“They only asked me for a copy of my ID card. They know who I am and trust me,” he said. “We’re entitled to a 35 percent discount on any purchase over 1 million pounds. This card will even allow us to access health care at reduced prices in the long term,” he said.

Special shopping card: "Al Sajjad card" designated for purchases from Hezbollah's new "Al-Nour" chain supermarket, which Hezb has opened in various Lebanese regions. Food will be provided at reduced prices, and it will be distributed to tens of thousands of beneficiaries. pic.twitter.com/U0H1rFy3Xy

“Hezbollah’s sale of food products certainly also has electoral motives, but the poorest have pressing needs,” said Maya, 38, who works for a media outlet affiliated with the party. She herself did not get an Al-Sajjad card, because she is not considered a priority case, but she said many Lebanese did urgently need it.

“There are remote and poor areas in Lebanon that the state has not cared for in years. So these regions’ inhabitants are going to accept all the help they can get,” she said.

‘The state no longer exists’

Not everyone shares Hezbollah supporters’ enthusiasm for the new supermarket chain. Journalist Mounir Rabih warns of the danger such a project presents in a country where the state is increasingly failing.

“Hezbollah is telling its public that neither the state nor the associations will be able to help it, which is very dangerous. That simply means that the state no longer exists. This is how the Shiite party undermines the people’s conception of the state,” Rabih said.

Hezbollah’s initiative is proof of its “wish to maintain a certain stability within the Shiite community and to hamper any protest or revolt”, he said.

“Hezbollah is always afraid of its community’s fury. It wants at all costs to avoid any outburst of anger due to hunger,” he explained, adding that it was planning for the long term, “because it considers that this is a crisis that won’t be resolved quickly”.

“Hezbollah hopes to come up with a comprehensive social assistance plan, including focusing on the development of health care in the future,” Rabih said.

“The party sees itself as a victim of a plot hatched against it by the United States, to bring it to its knees,” he said. “It’s responding by ensuring that its public doesn’t go hungry by securing its own supply channels through Iran, Syria or Iraq.”

Adam, a 40-year-old photographer from a Sunni village in southern Lebanon, is also critical of the pro-Iranian movement’s plans.

“Hezbollah is trying to control its popular base by all means. The Al-Sajjad card reflects its institutional side and shows that this party has the means to replace the state. I even think it already has. Lebanon is now a province within the state of Hezbollah,” Adam lamented. “Through its chain of supermarkets and products at reduced prices, it’s doing everything so that the Shiites view Hezbollah as the exclusive remedy against the crisis”, the photographer said.