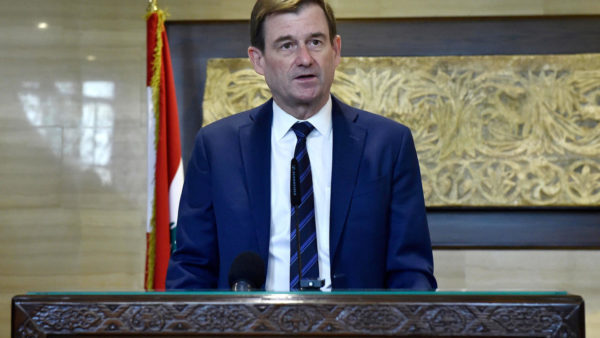 Senior US State Department envoy David Hale addresses the media after a meeting with Lebanon’s parliament speaker in Beirut on April 14 . Hale described Lebanon crisis as “the culmination of decades of mismanagement, corruption and the failure of Lebanese leaders to put the interests of the country first.”STR AFP
Share:

“America and its international partners are greatly concerned with the failure here to advance the critical reform agenda long demanded by the Lebanese people,” Hale said.

“Very little progress has been made,” he told a press conference after meeting parliament speaker Nabih Berri.

Hale arrived on Wednesday for a two-day trip during which he was expected to meet several top officials, including President Michel Aoun on Thursday.

This is Hale’s second visit to Lebanon since an enormous explosion at Beirut’s port on August 4 killed more than 200 people, laid waste to much of the capital and forced the cabinet of outgoing premier Hassan Diab to resign.

The devastating blast compounded Lebanon’s worst economic crisis since the 1975-1990 civil war, but political leaders have yet to agree on a new government despite mounting financial woes.

International donors have conditioned aid on the implementation of a spate of reforms, including budget cuts, changes in the banking and electricity sectors and the restructuring of the country’s debt pile.

“It is time now to call on Lebanese leaders to show sufficient flexibility to form a government that is willing and capable of true and fundamental reform,” Hale said.

“That’s the only path out of the crisis.”

Half of the population is now living below the poverty line and people have suffered amid rampant inflation.

The Lebanese pound, officially pegged to the dollar at 1,500 Lebanese pounds, sells for more than 12,000 to the greenback on the black market.

Hale described the crisis as “the culmination of decades of mismanagement, corruption and the failure of Lebanese leaders to put the interests of the country first.”