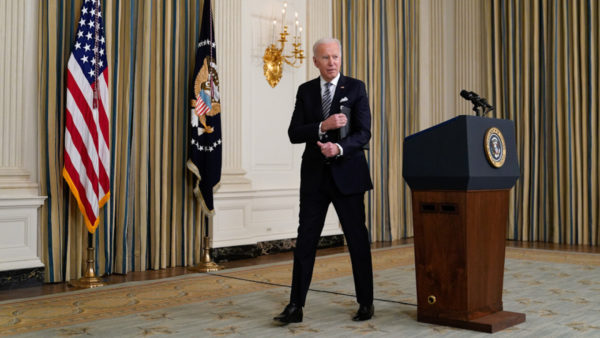 Last month President Joe Biden branded Russia’s president Vladimir Putin as a “killer” with “no soul ” who would soon “pay a price”
Share:

Moscow recalled its ambassador from Washington on Wednesday as US-Russia relations were plunged into crisis over President Joe Biden’s assessment of Vladimir Putin as a “killer” who would “pay a price” for election-meddling.

In an interview with ABC News, Biden was asked about a US intelligence report that the Russian president tried to harm his candidacy in the November 2020 election and promote that of Donald Trump.

Asked if he thought Putin, who has been accused of ordering the poisoning of opposition leader Alexei Navalny and other political opponents, is a “killer,” Biden said: “I do.”

The interview aired as the US Commerce Department announced it was toughening export restrictions imposed on Russia earlier this month as punishment for Navalny’s poisoning.

Russia responded by summoning its Washington envoy back to the country for consultations on its ties with the United States but stressed it wanted to prevent an “irreversible deterioration” in relations.

“The Russian ambassador in Washington, Anatoly Antonov, has been invited to come to Moscow for consultations conducted with the aim of analysing what should be done and where to go in the context of ties with the United States,” the Russian foreign ministry said in a statement.

Biden told ABC he had had a “long talk” with Putin after taking office in January and he knows him “relatively well.”

“The conversation started off, I said, ‘I know you and you know me. If I establish this occurred, then be prepared,” Biden said.

The statement marked a stark contrast with Trump’s steadfast refusal to say anything negative about the Russian president.

In a 2017 interview with Fox News, Trump was asked about Putin being a “killer.” “There are a lot of killers,” he replied. “You think our country’s so innocent?”

Biden said that despite his thoughts about the Russian leader “there are places where it’s in our mutual interest to work together.”

“That’s why I renewed the START agreement with him,” he said of the nuclear treaty. “That occurred while he’s doing this, but that’s overwhelmingly in the interest of humanity, that we diminish the prospect of a nuclear exchange.”

The ABC News interviewer, George Stephanopoulos, also recalled to Biden that he once told Putin he “doesn’t have a soul.”

“I did say that to him, yes. And his response was ‘We understand one another,'” Biden confirmed.

“I wasn’t being a wise guy. I was alone with him in his office, that’s how it came about.”

Biden said he had learned from dealing with “an awful lot” of leaders during a political career spanning almost five decades — including eight years as vice-president — that the most important thing was to “just know the other guy.”

The speaker of Russia’s lower house of parliament denounced Biden on Wednesday for agreeing with the description of Putin as a “killer.”

“Biden insulted the citizens of our country with his statement,” State Duma speaker Vyacheslav Volodin said. “Attacks on (Putin) are attacks on our country.”

The Kremlin on Wednesday also dismissed the US determination that Russia had targeted election infrastructure during the 2020 US polls.

“It is absolutely groundless and unsubstantiated,” Kremlin spokesman Dmitry Peskov said, adding that it was an “excuse” to consider new sanctions on Moscow.

His words were echoed by Deputy Foreign Minister Sergei Ryabkov, who also called the US report “groundless.”

According to US intelligence, Putin and other senior officials “were aware of and probably directed” Russia’s influence operation to sway the vote in Trump’s favor.

It concluded, however, that the election results were not compromised.

Russia faced allegations of US election meddling in 2016 for launching a social media campaign to boost Trump’s candidacy and discredit his opponent Hilary Clinton.

After Biden’s victory over Trump, Putin was among the last world leaders to congratulate the newly elected president.

“The Department of Commerce is committed to preventing Russia from accessing sensitive US technologies that might be diverted to its malign chemical weapons activities,” it said.

“In any case responsibility for further deterioration of Russian-American ties fully rests with the United States,” Ryabkov said.

Navalny returned to Russia in January after being treated for the poisoning in Germany, and is serving a two-and-a-half year jail term in a penal colony outside Moscow.

The latest sanctions add to US penalties already imposed on Moscow since Russia’s annexation of Crimea in 2014.