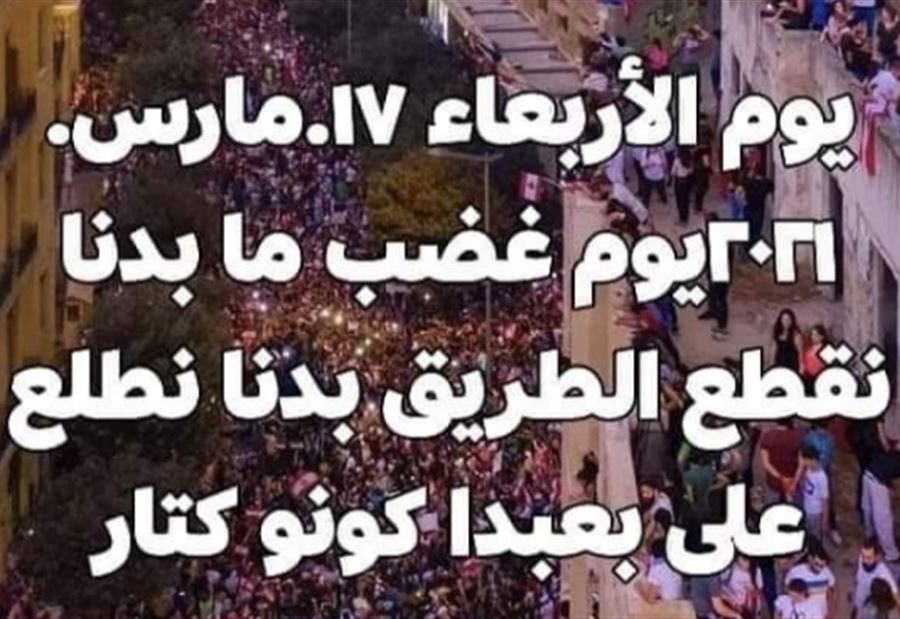 “Wednesday March 17 , 2021 will be a day of anger . We are not going to block roads … we are instead going to Baabda . Be all there ” Translation of the banner calling for the day of anger that will target the presidential palace in Baabda
Share:

Security officials are seriously concerned over a demonstration that will take place , Wednesday which will target the presidential Palace in Baabda

Security officials are also concerned that the mass rally that will take place near the presidential palace will be repeated in several areas of Lebanon .

What concerns security officials the most over tomorrow’s day of anger is the call by some parties for attacks against politicians .

During last week’s day of anger protesters set tires and trash containers on fire to block all the main roads leading to the capital Beirut .

The Lebanese are outraged over the collapse of the Lebanese Lira which lost about 90 % of its value .

The Lira , which was pegged against the dollar at about 1500LL to the US dollar was selling at 14,000 LL to the dollar on the black market on Tuesday.

There is growing discontent among Lebanon’s Shiite community, with protests in areas that are traditionally supportive of Hezbollah and the Amal Movement.

The protests were in the south and northern Bekaa and came as the national currency continued to slide in value.

The Iranian backed Hezbollah is funded by Iran and usually gets its dollars in crates through Beirut International airport. Hezbollah does not use the Lebanese banking system and has its own financial institutions .

Activist Ali Al-Amin said that Hezbollah loyalists concealed their pain because, if they raised their voice, they would be accused of treason. “There is a muffled discontent that may appear when the time is right,” he told Arab News. “The needs will increase the chaos and congestion, and we do not know how people explode.”

Two prominent party loyalists, Anis Al-Naqash and Qassem Kassir, raised the issue of Hezbollah’s fate in light of the worsening economic crisis.
Al-Naqash said the collapse of Lebanon would be the end of the resistance, while Kassir asked the party to become independent of Iran, return from Syria where it fought for Iran in defense of President Bashar Assad, and to turn its attention toward Lebanon’s domestic chaos.

Lebanon’s worst economic and financial crisis began in late 2019 and was made worse by the pandemic and a massive blast at Beirut’s port in August that killed dozens and wounded thousands.

Former PM Saad Hariri was chosen late October to form a n ew c cabinet but so far political bickering and disagreements between him and President Michel Aoun and his son-in-law MP Gebran Bassil. Bassil who according to analysts is the most despised and disliked politician in Lebanon reportedly wants to be the president and for this reason he is trying to force Hariri to give his FPM bloc a veto power in the cabinet to pave the way for him to replace Aoun as president in 2022 . Hezbollah is reportedly backing his plan and for this reason it has done nothing to facilitate the formation of the cabinet .