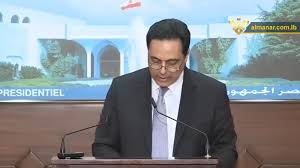 BEIRUT (AP) — Lebanon’s caretaker prime minister warned Saturday that the country was quickly headed toward chaos and appealed to politicians to put aside differences in order form a new government that can attract desperately needed foreign assistance.

Hassan Diab, who resigned almost seven months ago as prime minister, threatened to suspend his caretaker duties if that would increase pressure for a new Cabinet to be formed.

He spoke in a terse address to the nation as the currency continued its rapid collapse against the dollar, trading at nearly 11,000 Lebanese pounds on the black market for the first time in its history. Angry protesters have blocked streets and highways across the country with burning tires for days, as the pound slid to record new lows.

The crash in the local currency has resulted in a sharp increase in prices as well as delays in the arrival of fuel shipments, leading to more extended power cuts around the country, in some areas reaching more than 12 hours a day. The crisis has driven nearly half the population of the small country of 6 million into poverty, wiped out savings and slashed consumer purchasing power.

“The dollar is 10,500 (pounds) and everyone has four or five children on their neck, including their parents. They (corrupt politicians) need to feed us,” cried one protester.

“They vaccinated themselves from corona but they opened the country so that people could die,” he added, referring to a group of lawmakers who inoculated themselves in parliament last month without prior approval. a move that led the World Bank to consider suspending its financing of vaccines in Lebanon.

Another protester who identified himself only by his first name, Ali, said he was frustrated that other Lebanese were still sitting at home.

Diab, who resigned in the wake of the massive August 4 explosion at Beirut port, suggested he might stop working in his role.

“If it helps to form a government, I am prepared to resort to that option even though it goes against my principles,” he said.

Lebanon has also been in desperate need of foreign currency, but international donors have said they will only help the country financially if major reforms are implemented to fight widespread corruption, which has brought the nation to the brink of bankruptcy.

“What are you waiting for, more collapse? More suffering? Chaos?” Diab said, chiding senior politicians without naming them for grandstanding on the shape and size of the government while the country slides further into the abyss.

“What will having one minister more or less (in the cabinet) do if the entire country collapses,” he asked.

“Lebanon is in grave danger and the Lebanese are paying the price.”