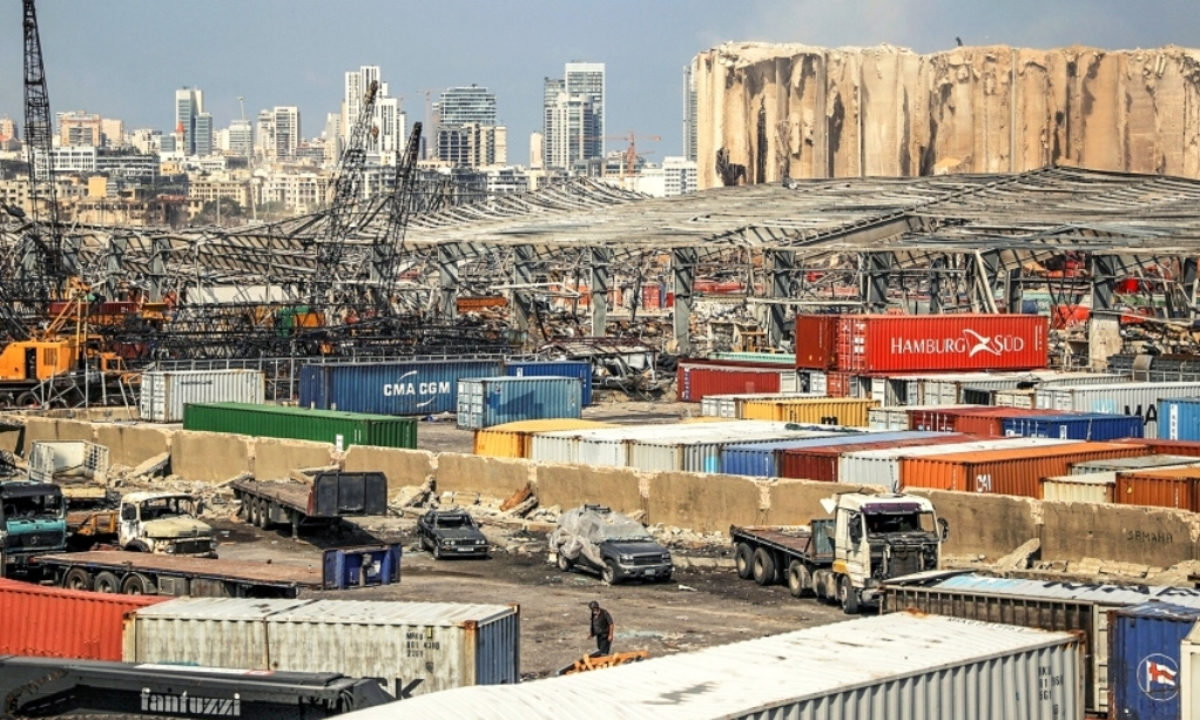 About 52 containers of hazardous chemicals were still at the port following the Aug 4 explosion . A German company was hired to dispose off the material
Share:

“I have never seen a situation like this before in my life,” Michael Wentler, a chemical expert managing Combi Lift’s Beirut operation, said, describing festering chemical mixtures so corrosive they burned gaping holes right through massive shipping containers. “We found substances that, if mixed together, would lead to an explosion,” he told AFP. “I don’t think the port authorities know what they have on site, inside the port.”

After a blast of historic proportions at Beirut’s port last year, Lebanon only escaped a second chemical inferno by chance, the German company clearing the dockside has said.

Michael Wentler, a chemical expert managing Combi Lift’s Beirut operation, said thousands of litres of dangerous substances stored in decaying containers for more than a decade at the port had turned the area into a minefield of chemical hazards.

“We found substances that, if mixed together, would lead to an explosion,” he told AFP on Wednesday, recounting an assignment he said compared to no other.

“The port is lucky, because the containers have a distance” between them, Wentler added.

There were a series of subsequent blazes in the port since the August 4 explosion, that killed more than 200 people and devastated swathes of Beirut.

Heavy lift transport company Combi Lift in November signed a contract with Lebanese authorities to deal with the hazardous substances at the blast site.

This month, Wentler and his team finished treating 52 containers, in a process he said revealed the lethal chaos that has long prevailed at Beirut harbour.

“I have never seen a situation like this before in my life,” Wentler said, describing festering chemical mixtures so corrosive they burned gaping holes right through massive shipping containers.

“You have like a sea or a river of yellow and green substances that came out” of some containers, he added. “These chemicals were bubbling”.

The containers — which have been at the port for more than 10 years — were stored haphazardly in seven different locations. Most were located in an open-air cargo zone at the opposite end of the blast site.

Interim port chief Bassem al-Kaisi said in November that Beirut could have been “wiped out” if the substances caught fire.

The August 4 blast was caused by tonnes of ammonium nitrate that had been inadequately stored for more than six years.

Authorities are yet to explain why the large fertiliser shipment ended up in Lebanon, and why it stayed there so long.

The origin of chemical substances treated by Combi Lift is no clearer.

“None of the authorities seem to know anything about these shipments,” Wentler said, apart from the date they entered the port.

“I don’t think the port authorities know what they have on site, inside the port.”

Last year’s blast severely disfigured the containers, which were already decaying and punctured with acid burns after years of neglect.

“It was not possible to lift or move many of the containers, because their condition was so bad,” Wentler said, meaning experts had to move the chemicals by hand.

Wentler said he was saved by a hazmat suit when hydrochloric acid burned through the bottom of a barrel he was lifting and splashed to the ground.

Hydrochloric acid, a corrosive and toxic substance, made up 60 percent of the chemicals Combi Lift came across, Wentler said.

The firm also had to handle thousands of litres of acetone, which is highly flammable, and containers of hydrogen peroxide, a liquid substance, which if mixed together could lead to an explosion, Wentler said.

By chance, the containers of acetone and hydrogen peroxide were stored in separate locations, Wentler added.

The “most dangerous” chemicals treated included hydrofluoric acid, which can be deadly if it enters the bloodstream or makes contact with the skin, according to Wentler.

The substances were sealed in special containers that Combi Lift plans to ship to Germany at the end of February.

The Lebanese government has yet to pay the $2 million it owes the company — $1 million of which should be paid up front when the containers are loaded before departure, Wentler added.