Can Lebanon avert its slow death? 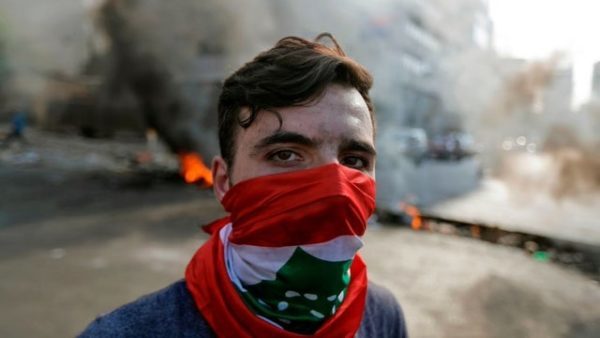 An anti-government protester covers his face with a Lebanese flag, using it as a mask to help curb the spread of the coronavirus, during a protest against the corrupt ruling class . The civilian movement that fueled the revolution is pushing for a necessary overhaul to the entire political system. Without a reinvention of Lebanon that allows for an alternative to the ruling class that is filled with corruption, the country risks becoming a failed state.
Share:

The civilian movement that fueled the revolution is pushing for a necessary overhaul to the entire political system. Without a reinvention of Lebanon that allows for an alternative to the ruling class that is filled with corruption, the country risks becoming a failed state.

As Lebanon deals with the pandemic and economic crisis in the aftermath of the port blast last summer, its health care system is on the brink of total collapse. Hospital beds, medicines, and oxygen tanks are in short supply as coronavirus cases reached a record daily high this month. International assistance is unlikely without critical government reforms. A local solution to the crisis is also unlikely as political elites bicker and sectarian divides harden. The United States, the largest donor to the International Monetary Fund and the Lebanese Army, provides the last hope.

In 2019, mass protests tried to alter the government and the foundations on which it was built. Lebanese leaders have failed citizens in more ways than one, and their corruption has depleted key resources in the country. Food insecurity affects 60 percent of the population, and 30 percent of the population is unemployed. Further, an acute economic crisis caused the Lebanese lira to lose 90 percent of its value, and banks have imposed strict limits on dollar withdrawals, leaving many people penniless with no credible financial resuscitation strategy in the works.

Efforts to secure coronavirus vaccines were first curbed by bureaucratic delays, but a recent draft law in parliament should now pave the way for deliveries. Lebanese politicians and their patrons, however, still have to come to terms on a new government, a process that has been stalled for months over the size of the cabinet, responsibility for appointments, and controversy with ownership of the public works portfolios where funds will flow once reconstruction is underway. The United States approach with Iran would likely influence next steps, as cabinet posts have been promised to individuals who could face sanctions.

Moreover, international assistance is conditioned on the formation of a functional government able to handle public affairs, along with serious economic and political reforms that have not taken place. Talks with the International Monetary Fund over its $10 billion loan program are frozen. No officials have taken responsibility for the port blast, as politicians have united to block accountability. The health minister shockingly claimed the deaths in the port blast were preordained. The efforts of the judge tasked with determining the causes of the port blast led to the indictment of four politicians on charges of negligence. However, the judge was then swiftly discredited and accused of targeting the officials.

Angry citizens first viewed the port blast as a defining moment that could produce real change and finally overcome the culture of impunity that is endemic in the government. This sentiment was reinforced by inaction on reconstruction, which was mostly driven by civilian groups and solidarity networks. Moreover, no decision has been made on debt restructuring to address the economic crisis, while national reserves are dwindling. When the funds are depleted, Lebanon will not be able to afford food, let alone health care, because the country will just be broke.

Citizens could lose hope with the realization that the kleptocracy is here to stay. As a harbinger of the unrest that is brewing among the destitute, protests in Tripoli reveal limits with the patience of citizens who have no confidence in its ruling class. The dire state of health care demonstrates the level of corruption in a mismanaged government unable to lead, let alone provide the most basic services to its citizens. The only solution for Lebanon would be complete reforms of the bureaucracy, the health care system, and the pervasive clientelism for politicians.

While Lebanon is unlikely a priority for President Biden, the United States has the gravitas and resources to produce a plan to save it. The people of Lebanon should solicit American assistance based on shared democratic values. The civilian movement that fueled the revolution is pushing for a necessary overhaul to the entire political system. Without a reinvention of Lebanon that allows for an alternative to the ruling class that is filled with corruption, the country risks becoming a failed state.

Patricia Karam is regional director of the Middle East and North Africa at the International Republican Institute that works to promote democracy.