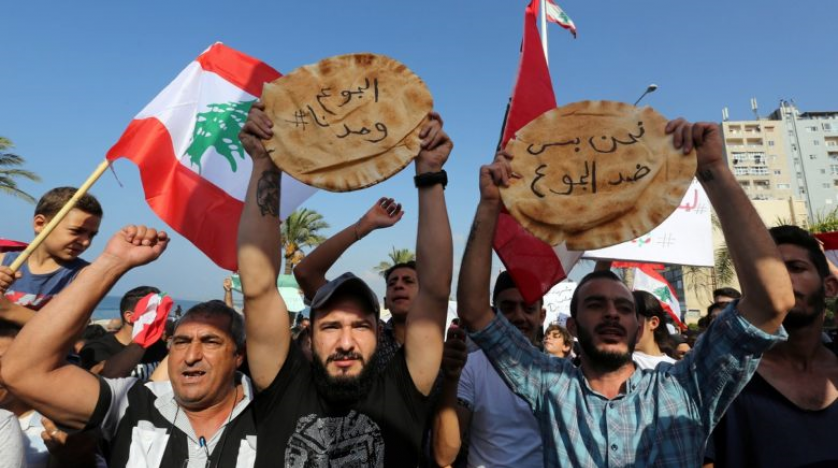 File photo: Demonstrators hold loaves of bread that read we are only against hunger . The combination of a sinking currency and soaring inflation is leaving millions hungry in Lebanon . – REUTERS
Share:

Lebanon on Monday hiked the price of subsidised bread by a fifth, as the government struggles to maintain funding key goods amid an economic crisis that has already sparked protests.

Caretaker economy minister Raoul Nehme said the price was due to an increase of wheat prices worldwide coupled with the high exchange rate to buy dollars.

Lebanon is mired in its worst financial crunch since the 1975-1990 civil war, resulting in recession, a plunge in foreign reserves, and rising inflation.

A large bag of flat bread, previously weighing 900 grammes and costing 2,000 Lebanese pounds, would now weigh 930 grammes and cost 2,500 pounds, a rise of around 20 percent, the National News Agency said.

It is the latest increase, with the ministry rising the price of bread made with subsidised flour in June and November 2020.

More than half of Lebanon’s population live below the poverty line, according to the UN.

In addition, lockdowns to stem the spread of the novel coronavirus have compounded people’s woes — and sparked protests in the country’s second city Tripoli.

Also on Monday, food importers warned the economic crisis and lockdown were threatening to deplete food stocks by “about half, or more” in a country that imports around 80 percent of its food.

As the central bank’s foreign currency reserves become increasingly depleted, fears have risen in recent months that the state may cut subsidies on fuel, flour and medicine.

To ease the burden, the World Bank has approved emergency aid worth $246 million to help 786,000 Lebanese.