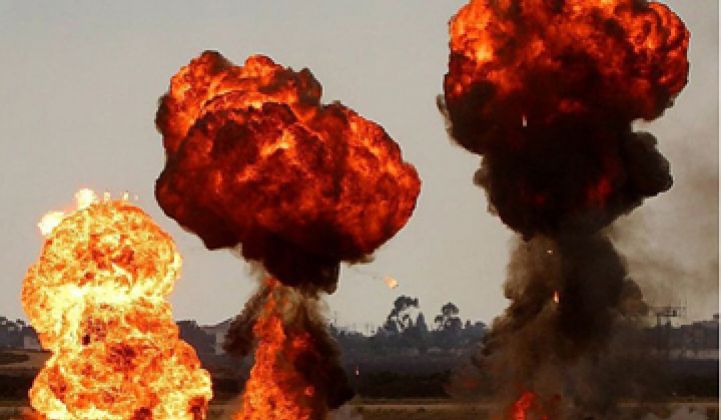 File photo of the NGK sodium sulfide explosion that occurred in 2011 in Japan
Share:

Several containers of sodium sulfide that were shipped from China to Syria on MSC MASHA 3 vessel could be offloaded at a Lebanese port (Beirut or Tripoli) , with the aim of transferring it later to Syria overland through Lebanon ,

This prompted MP Georges Okais of the Lebanese Forces to warn the Lebanese authorities that storing explosive chemicals at Lebanese ports could lead to a repeat of the Aug 4, 2020 catastrophic explosion.

“It seems that this ruling authority does not want to learn from the August 4 massacre,” Okais warned in a statement.

“Ten containers of this material will be off a Lebanese port in the coming days ” Okais added.

Caretaker Finance Minister Ghazi Wazni on Thursday reportedly instructed the Higher Customs Council to “facilitate the process of unloading the cargo of the ship MSC except for the containers carrying the sodium sulfide chemical , ” Lebanese media reported on Thursday

But unfortunately very few people in Lebanon trust the government .

All the top political positions in Lebanon are controlled by Hezbollah , from president Michel Aoun to PM Hassan Diab to Parliament Speaker Nabih Berri .

The Iranian backed Hezbollah is a staunch ally of the Syrian regime .

Minsiter Wazni represents Speaker Berri , a key ally of Hezbollah in the cabinet

The August 4th explosion was caused by a chemical that was also shipped to Lebanon and stored at the Beirut port for use by Hezbollah and the Syrian regime for bomb making . Most of the product was shipped to Syria for use in the barrel bombs by the Syrian regime against its civilians while Hezbollah shipped a lot of the product to the UK, Cyprus, Germany and several parts of Lebanon for bomb making . Out of the 2755 tons that was shipped about 500 tons exploded according to the FBI .

President Aoun and PM Diab knew all about the Ammonium Nitrate that was stored at the port at least two weeks before the explosion and did nothing to stop it . Both had excuses the Lebanese people found unacceptable

“We have the right and the Lebanese people have the right to ask: who guarantees to us that the chemical material will not be emptied and stored inside Lebanese territory in a dreadful repetition of the ammonium nitrate tragedy?” Okais added. wondered.

“Will the containers be searched under the supervision of the Lebanese Army, which is the only side we trust in this issue?” Okais added, describing the affair as a “scandal.”