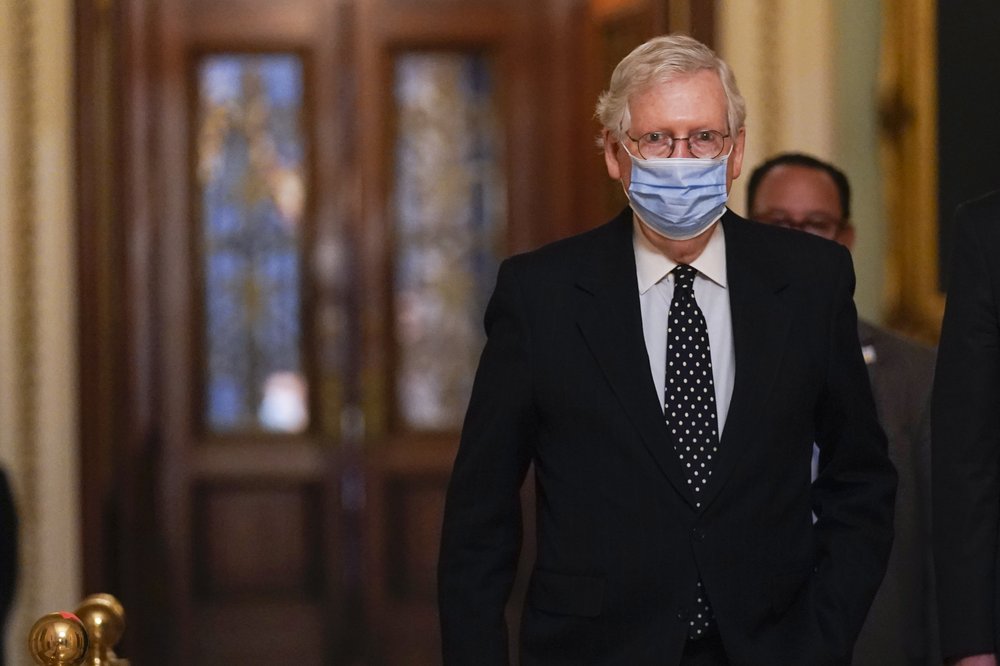 In this Jan. 6, 2021, photo, Senate Majority Leader Mitch McConnell of Ky., walks from the Senate floor to his office on Capitol Hill in Washington. Now that the House has impeached President Donald Trump for the second time, House Speaker Nancy Pelosi must figure out the best strategy for arguing the case before the Senate. Senate rules say the trial must start soon after the chamber receives the article of impeachment, which cites “incitement of insurrection” after an angry mob of Trump’s supporters invaded the Capitol last week. (AP Photo/Manuel Balce Ceneta)
Share:

Senate Republican leader Mitch McConnell on Tuesday explicitly blamed President Donald Trump for the deadly riot at the Capitol, saying the mob was “fed lies” and that the president and others “provoked” those intent on overturning Democrat Joe Biden’s election.

Ahead of Trump’s historic second impeachment trial, McConnell’s remarks were his most severe and public rebuke of the outgoing president. The GOP leader is setting a tone as Republicans weigh whether to convict Trump on the impeachment charge that will soon be sent over from the House: “incitement of insurrection.”

“The mob was fed lies,” McConnell said. “They were provoked by the president and other powerful people, and they tried to use fear and violence to stop a specific proceeding of the first branch of the federal government which they did not like.”

The Republican leader vowed a “safe and successful” inauguration of Biden on Wednesday at the Capitol, where final preparations were underway amid heavy security.

Trump’s last full day in office Tuesday was also senators’ first day back since the deadly Capitol siege and since the House voted to impeach him for his role in the riots — an unparalleled time of transition as the Senate prepares for the second impeachment trial in two years and presses ahead with the confirmation of Biden’s Cabinet.

Three new Democratic senators-elect are set to be sworn into office Wednesday shortly after Biden’s inauguration, giving the Democrats the barest majority, a 50-50 Senate chamber. The new vice president, Kamala Harris, will swear them in and serve as an eventual tie-breaking vote.

The Democrats, led by Senate Democratic leader Chuck Schumer, will take charge of the Senate as they launch a trial to hold the defeated president responsible for the siege, while also quickly confirming Biden’s Cabinet and being asked to consider passage of a sweeping new $1.9 trillion COVID-19 relief bill.

“The inauguration of a new president and the start of a new administration always brings a flurry of activity to our nation’s government,” Schumer said in remarks on the Senate floor Tuesday morning. “But rarely has so much piled up for the Senate as during this particular transition.”

Making the case for Trump’s conviction, Schumer said the Senate needs to set a precedent that the “severest offense ever committed by a president would be met by the severest remedy provided by the Constitution — impeachment,” and disbarment from future office.

McConnell and Schumer conferred later Tuesday about how to balance the trial with other business and how to organize the evenly divided chamber, a process that could slow all of the Senate’s business and delay the impeachment proceedings.

There were signs of an early impasse. McConnell expressed to Schumer “his long-held view that the crucial, longstanding, and bipartisan Senate rules concerning the legislative filibuster remain intact, specifically during the power share for the next two years,” according to spokesman Doug Andres. Eliminating the Senate filibuster, a procedural move that requires a higher bar for legislation to pass, has been a priority for Democrats who will now control the House, Senate and White House.

But a spokesman for Schumer, Justin Goodman, said the Democratic leader “expressed that the fairest, most reasonable and easiest path forward” was to adopt an agreement similar to a 2001 consensus between the parties, the last time the Senate was evenly divided, without “extraneous changes from either side.”

Five of Biden’s nominees had committee hearings Tuesday as the Senate prepared for swift confirmation of some as soon as the president-elect takes office, as is often done particularly for the White House’s national security team. Many noted the harrowing events at the Capitol on Jan. 6.

The nominee for Director of National Intelligence, Avril Haines, testified of her own “eerie” feeling coming to the Capitol complex after “how truly disturbing it was” to see the attack on the building unfold. Biden’s nominee for secretary of the Department of Homeland Security, Alejandro Mayorkas, vowed to get to the bottom of the “horrifying” siege.

The start of the new session of Congress was also forcing lawmakers to come to terms with the post-Trump era, a transfer of power that Trump’s mob of supporters tried to prevent after he urged them to storm the Capitol as Congress was tallying the Electoral College vote confirming Biden’s election.

Hawley continued to embrace his role in the opposition, saying on Tuesday that he will block a quick confirmation of Mayorkas, the Homeland Security nominee, to protest Biden’s immigration plan to provide a path to citizenship for 11 million people. Hawley said Mayorkas “has not adequately explained how he will enforce federal law and secure the southern border.”

As they begin the year newly in the minority, Republican senators face a daunting choice of whether to convict Trump of inciting the insurrection, the first impeachment trial of a president no longer in office — but one who continues to hold great sway over the party’s voters.

Some Republicans want to halt the impeachment trial. Texas GOP Sen. John Cornyn was among those Republicans casting doubt on the legal ability of the Senate to convict a president no longer in office, though legal scholars differ on the issue.

“It’s never happened before and maybe that’s for a good reason,” he said.

The House impeached Trump last week on the sole charge, incitement of insurrection, making him the only president to be twice impeached. A protester died during the riot and a police officer died later of injuries; three other people involved died of medical emergencies. He was first impeached in 2019 over relations with Ukraine and was acquitted in 2020 by the Senate.Full Coverage: Capitol siege

The three new Democratic senators, Raphael Warnock and Jon Ossoff of Georgia, and Alex Padilla of California, are to be sworn into office Wednesday, according to a person granted anonymity to discuss planning.