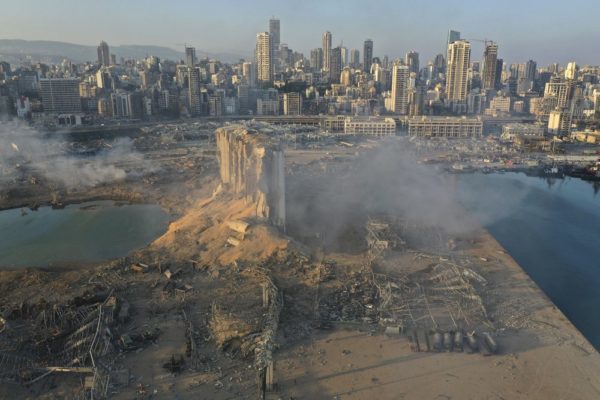 Three Syrian businessmen with close ties to the Syrian government have been linked to the company that bought the explosive material that entered Beirut’s port in 2013 and fuelled a massive explosion in August that devastated parts of the Lebanese capital.

Savaro also lists as a “secretary”, or board member tasked with ensuring the smooth running of the company, a firm that provided the same service to a company directed by Imad Khuri – establishing a further link between the businessmen and the company that procured the ammonium nitrate.

All three men have been sanctioned by the United States for allegedly aiding and providing services to the government of Syrian President Bashar al-Assad. They could not be contacted for comment.

In a November 2015 statement announcing sanctions on Mudalal Khuri, the US Treasury said he had, among other things, served as an intermediary for al-Assad’s government “on an attempted procurement of ammonium nitrate in late 2013” – the same period when the ammonium nitrate entered Beirut.

Imad Khuri was sanctioned in July 2016 for providing support to his brother’s activities.

The new information raises questions about whether the Syrian government had sought to procure the powerful explosives for use in Syria during the height of the country’s war.

Al-Assad’s government had been accused by the International Network on Explosive Weapons of using ammonium nitrate in the production of crude weapons such as so-called barrel bombs during the same period.

Multiple reports have suggested that large quantities of the 2,750 tonnes of ammonium nitrate did not explode after being stored in a port hangar in 2014 and may have been removed previously, though some experts have said the size of the blast was consistent with the full amount being present.

The August 4 explosion killed at least 200 people, wounded more than 600 and destroyed wide swaths of Beirut.

The ammonium nitrate was purchased from Georgian chemicals factory Rustavi Azot by Savaro Limited on July 10, 2013, according to a sales contract seen by Al Jazeera.

The official destination of the materials was a Mozambican explosive factory, Fabrica de Explosivos de Moçambique (FEM). An FEM representative previously told the Reuters news agency they had ordered the materials through Savaro – and therefore claimed they never owned it.

Hatoum, the documentary filmmaker, said the use of this intermediary between the buyer and the seller alone raised red flags.

“Why do you need to use a shell company to buy this? It means the seller and buyer can claim to have no responsibility – and it hides the identity of the real owners,” he told Al Jazeera.

Savaro, registered as a chemical trading company in the UK, has the hallmarks of a shell company – including few to no real employees and little actual business.

The official destination of the materials was a Mozambican explosive factory, Fabrica de Explosivos de Moçambique (FEM). An FEM representative previously told the Reuters news agency they had ordered the materials through Savaro – and therefore claimed they never owned it.

Hatoum, the documentary filmmaker, said the use of this intermediary between the buyer and the seller alone raised red flags.

“Why do you need to use a shell company to buy this? It means the seller and buyer can claim to have no responsibility – and it hides the identity of the real owners,” he told Al Jazeera.

Marina Psyllou, the company’s current registered director, did not respond to a request for comment. She is registered as the director of at least eight active offshore companies, according to the International Consortium of Investigative Journalists.

The company’s former director Greta Bieliene, who resigned on October 1, 2020, could not be reached for comment.

In the last decade, Savaro has tied itself to at least three UK-based addresses, including one reportedly found to be a “Victorian terraced house”.

Another telltale sign that Savaro is a shell company is that the same address was also used by dozens of other companies – including Hesco Engineering and Construction.

From the time of its incorporation on August 4, 2005, until October 20, 2014, Hesco was directed by Haswani, the Syrian businessman sanctioned by the US in 2015 for allegedly facilitating the purchase of oil from ISIL (ISIS) for the Syrian government.

Hesco was dissolved on November 17, 2020 – three and a half months after the Beirut port explosion. The company could not be reached for comment at a phone number for their Damascus office.

Savaro’s second address – revealed in a 2011 address change – is 13 John Prince’s Street, 2nd Floor, London, W1G 0JR. This is the same address used by IK Petroleum Industrial Company Limited, a company directed by Imad Khuri from the time of its incorporation on August 6, 2013, until he resigned on July 18, 2016.

This address is also used by Omega Direct Limited – a firm that the US-based Counter Extremism Project alleged was affiliated with Haswani’s company, Hesco, in a March 2015 letter.

IK Petroleum lists another UK-based firm, Interstatus Limited, as a “secretary”. Interstatus is also listed as a secretary at Savaro, and Savaro’s third publicly available address in the UK is the same as Interstatus’: 14 Cotton’s Gardens, London, E2 8DN.

Interstatus’ registered director is Marina Pysyllou — the same woman registered as the director of Savaro.

Jodi Vittori, a non-resident scholar in the Democracy, Conflict and Governance programme at the Carnegie Endowment for International Peace, said the links between companies directed by businessmen close to the Syrian government and the ammonium nitrate were “concerning” and “should be a priority to look into”.

“The ties between companies of known pro-Syrian regime elements with this incredibly dubious chain of custody of the ammonium nitrate is very troubling and requires further investigation,” said Vittori, an expert on the linkages of corruption, state fragility and illicit finance.

The man tasked with investigating the explosion in Lebanon, Fadi Sawan, has so far focused largely on the local angle, charging some 30 people with criminal negligence for failing to remove the dangerous cargo from the port for nearly seven years. Among those charged are the outgoing prime minister, Hassan Diab, and three former ministers.

But Hatoum said Sawan must also answer why the ammonium nitrate came to Beirut in the first place – and who shipped it there.

“If a car or a weapon is used in a crime then the police would of course directly look into who owns it. Is it possible that almost six months after the explosion we still don’t know who owns the ammonium nitrate?” Hatoum said.

“There is only one of two answers: laziness and incompetence, or the presence of red lines