Iran blackmailing Biden to remove the sanctions. Makes no sense for US to rejoin the nuke deal 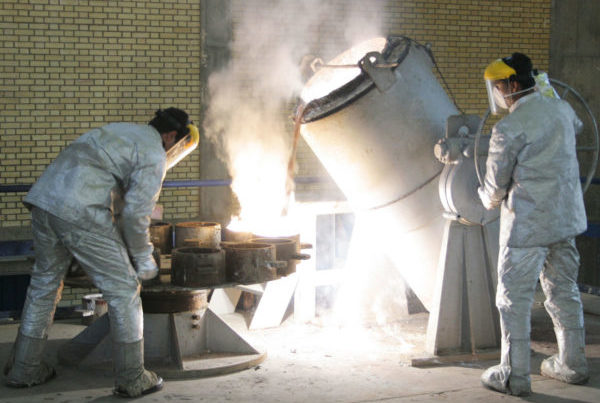 ISFAHAN, IRAN – MARCH 30: Technicians work inside of a uranium conversion facility producing unit in 2005 outside the city of Isfahan, Iran. After the 2015 Iran nuclear deal put limits on the program, Iran’s government has been increasing uranium enrichment since the United States pulled out of deal. (Photo by Getty Images)
Share:

This week’s escalation of tensions by Tehran looks like blackmail to force president Elect Joe Biden to immediately and unconditionally remove the sanctions that President Trump began to impose . Supreme Leader Ayatollah Ali Khamenei repeated this demand on Friday, calling on the U.S. to lift sanctions on Iran “immediately.” It makes no sense for US to rejoin the nuclear deal. if Biden were to give in to nuclear extortion and abandon sanctions, he would surrender his most important leverage against Tehran and never achieve his stated goal of negotiating a longer-lasting, better agreement.

Iran has decided to escalate tensions with the West by publicly confirming the production of enriched uranium at an underground nuclear facility and seizing a South Korean oil tanker transiting the Persian Gulf.

This escalation may be designed to put additional pressure on President-elect Joe Biden to rejoin the 2015 Iran nuclear deal—a move that would give extensive sanctions relief to a regime under enormous economic stress. But if Biden were to give in to nuclear extortion and abandon sanctions, he would surrender his most important leverage against Tehran and never achieve his stated goal of negotiating a longer-lasting, better agreement.

Hinting at these flaws, Biden recently said he wants to build on the 2015 deal with a new agreement to “tighten and lengthen Iran’s nuclear constraints, as we address the missile program.” During the presidential campaign, he also promised to confront Iran’s human-rights record and its “destabilizing activities, which threaten our friends and partners in the region.” But the president-elect maintains that the only way to negotiate a new framework is by first returning to the old one.

There’s one big problem with that logic. Since rejoining the original nuclear deal requires Washington to lift its most punishing sanctions, the economic leverage against Tehran that Biden inherits from his predecessor will evaporate the moment sanctions are relaxed.

Congress had worked for years to enact tough sanctions to force the Iranian regime to abandon its malign activities. Indeed, former President Barack Obama credited these sanctions with bringing Iran to the negotiating table in the first place.

The obvious question, then, is this: If Obama contends U.S. sanctions pressure was necessary to produce an agreement as deeply flawed as the Iran nuclear deal, how could Biden ever negotiate far more restrictions on Iran with far less economic leverage?

Biden’s retreat from sanctions in the face of Iran’s threats to expand its enrichment-related activities, kick out international inspectors, and build additional nuclear reactors—in effect, giving in to a nuclear extortion racket—would also send a clear message to the mullahs: They can wait out a Biden administration in negotiations because he will never reimpose sanctions out of fear Iran might again expand its nuclear activities.

Another challenge to Biden’s race to rejoin the nuclear deal: The agreement has already started to expire. The deal’s first so-called sunset clause—the termination of United Nations restrictions on transferring conventional arms to Iran—already came into effect in October. Were it not for an executive order issued by the Trump administration threatening sanctions against Russia and China if they transfer weapons to Iran, such arms sales would already be underway. Biden has not said whether he will enforce those sanctions.

Developments in the nuclear realm should also prompt Biden to clarify his expectation that Tehran will return to strict compliance with the old deal if Washington rejoins it. The International Atomic Energy Agency has evidence that Iran is concealing undeclared nuclear material, activities, and sites. The agency’s investigation follows Israel’s 2018 clandestine acquisition of the Iranian regime’s secret nuclear weapons archive as well as declarations from the U.S. State Department that Iran has been keeping nuclear-weapons scientists employed at a military agency. At the very least, Biden must require Iran to fully account for its undeclared nuclear work before considering even the slightest of sanctions relief. Otherwise, he will have traded away Washington’s leverage without achieving his one and only condition.

If Biden needs another compelling reason to change course: Congress would oppose sanctions relief for Iran’s Revolutionary Guard Corps (IRGC), just as Democrats and Republicans united in 2017 to pass legislation requiring the Trump administration to designate the Corps as a terrorist entity and impose sanctions on its affiliates. Notably, that vote came while the United States was still a participant in the nuclear deal.

Last year, the U.S. Treasury Department sanctioned the Central Bank of Iran for its financing of the IRGC’s Quds Force and Hezbollah. The U.S. Financial Crimes Enforcement Network declared Iran’s financial sector to be a primary jurisdiction of money laundering concern—a finding reinforced when the intergovernmental Financial Action Task Force urged a blacklisting of Iran’s banking system due to evidence of terror financing.

The U.S. Treasury also imposed terrorism sanctions on the National Iranian Oil Company and National Iranian Tanker Company, two pillars of Iran’s energy economy, for their financial support to the IRGC. Congress should send a clear message to the incoming administration that sanctions relief benefiting the IRGC and its auxiliaries is simply unacceptable.

Iran-deal supporters avoid debating the many fallacies inherent in returning to the agreement. Instead, they point to Iran’s recent expansion of uranium enrichment activities and declare the Trump administration’s maximum-pressure strategy a failure. For them, the only way to contain Iran’s nuclear program is to pay the mullahs to stop enriching—even if it means funding the IRGC, rejoining an expiring deal, turning a blind eye to clandestine nuclear activity, missile testing, and human-rights abuses, and leaving Iran’s enrichment capabilities intact so that the regime can shake down the international community for more money in the future.

What the deal’s supporters ignore, however, is that maximum pressure is only a year or so old—and that it took Obama four years to get Iran to the negotiating table and another two years to get the nuclear deal.

The Trump administration remained in the Iran deal until 2018. Sanctions waivers allowed Iran to export a million barrels per day of oil until 2019. Sanctions on Iran’s main shipping line, non-oil companies, and the financial sector did not arrive until 2020. While the International Monetary Fund already reports that Iran has only a few billion dollars of remaining foreign exchange reserves, the peak impact of maximum pressure is still to come.

The deal’s supporters ignore another important fact: The regime is threatening the international community with nuclear enrichment because the agreement allowed Tehran to retain its enrichment-related capabilities. So long as the regime maintains these capabilities, it can threaten to expand enrichment at any time of its choosing.

Notably, however, the mullahs have avoided overt nuclear moves that might trigger a U.S. or Israeli military strike. The regime’s slow and steady escalation of enrichment appears intended to create anxiety and political pressure in Europe rather than trip Washington’s or Jerusalem’s red lines for military action.

Biden’s stated eagerness to submit to the mullah’s extortion racket could alter Iranian nuclear strategy. Not only will Tehran rightly perceive that Biden will be unwilling to act on any threat to reimpose sanctions in the future—a move that would prompt the regime to return to the very same enrichment we see today—it might also assess Biden to be more averse than Trump to the use of military force—making the unanswered questions surrounding Iran’s clandestine program even more critical.

It makes perfect sense that the president-elect wants to work with U.S. allies to confront the myriad national-security challenges posed by Iran. But turning a blind eye to the clerical regime’s nuclear deception, racing back into a deal that’s already expiring, undermining U.S. negotiating leverage, and subsidizing Iranian-sponsored imperialism and terrorism—that doesn’t make much sense at all.