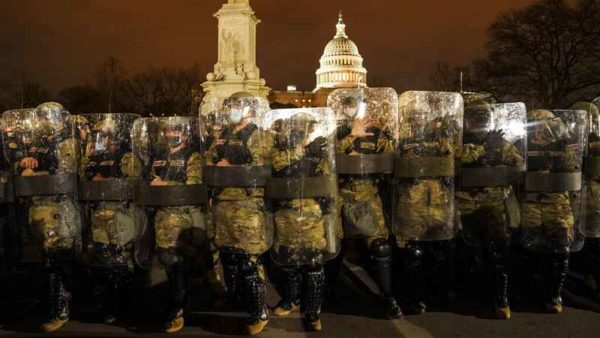 District of Columbia National Guard stand outside the Capitol, Wednesday night, Jan. 6, 2021, after a day of rioting protesters. It’s been a stunning day as a number of lawmakers and then the mob of protesters tried to overturn America’s presidential election, undercut the nation’s democracy and keep Democrat Joe Biden from replacing Trump in the White House.
Share:

At least 50 police officers were injured in the Capitol riot that also killed four people after supporters of President Donald Trump invaded the building to prevent the confirmation of Joe Biden’s electoral victory.

One woman was shot by a police officer, while another woman and two men died from “medical emergencies,” police said. Authorities later identified the woman who was shot as Ashli Babbitt, described in media reports as a pro-Trump, 35-year-old California native and a veteran of the Air Force.

“As protesters were forcing their way toward the House Chamber where Members of Congress were sheltering in place, a sworn USCP employee discharged their service weapon, striking an adult female,” said U.S. Capitol Police Chief Steven Sund said in a statement Thursday. “Medical assistance was rendered immediately, and the female was transported to the hospital where she later succumbed to her injuries.”

Based on Capitol Police policy, the officer has been placed on administrative leave pending investigation, he said.

“This is a tragic incident and I send my condolences to the victims’ family and friends,” Contee said.

Sund said more than 50 police officers of his force and D.C. police were injured, and several were hospitalized.

More than an hour after Wednesday’s rioting began, Trump urged his supporters to remain peaceful, asserting that “WE are the Party of Law & Order.” He later offered sympathy for the rioters.

Police had responded to violent events across the Capitol complex, including two reports of pipe bombs that were determined to be hazardous and harmful, Sund said. The devices were disabled and turned over to the FBI.

As rioters tried to force their way into the House chamber, a Capitol police officer fired their weapon, hitting Babbitt, Sund said. She was transported to a hospital, where she died, he said.

The officer who shot her has been placed on administrative leave pending an investigation, in accordance with department policy, the chief said.

Washington Mayor Muriel Bowser announced a curfew of 6 p.m. Wednesday through 6 a.m. Thursday. The mayor also declared an extension of a “public emergency” for the next 15 days, which would go through Inauguration Day on Jan. 20.

“If you mean to cause trouble in the streets of Washington, D.C., you will be arrested,” Bowser said.

“To our fellow Americans, I know that I speak for all of us when I say that we saw an unprecedented attack on our American democracy, incited by our United States president, and he must be held accountable,” she said.

“His constant and divisive rhetoric led to the abhorrent actions we saw today, and sadly it led to a loss of life that will forever stain what could have been and what should have been a peaceful transfer of power,” she said.

“Again, he must be held accountable.”

The mob of Trump supporters descended on the Capitol building shortly after proceedings began to count the Electoral College votes and confirm Biden’s win over Trump. Biden received 306 votes, 36 more than he needed, while Trump got 232.

In the lead-up to the joint session of Congress, Trump delivered a fiery rant to many of those supporters at a rally on the White House ellipse, less than two miles from the Capitol. Trump in that speech falsely claimed, as he has done repeatedly since the Nov. 3 election, that the race was stolen from him due to widespread fraud.

Trump singled out Vice President Mike Pence, who was presiding over the event in Congress, urging him to reject key electoral votes in order to overturn the election.

Pence, who had no legal power to do so, declined Trump’s demands and said he would perform his mostly ceremonial duties in accordance with the law and the Constitution.

Dozens of Republicans in the House and Senate had vowed before the event to object to the slates of electors from key battleground states won by Biden. Shortly after the session began at 1 p.m. ET, objections were made to Arizona’s votes, triggering a delay in proceedings as the House and Senate split off to debate and vote on the challenge.

But the debates quickly came to a halt, as thousands of Trump supporters who had gathered outside broke through lines of law enforcement officers and infiltrated the Capitol.

Lockdowns and evacuations were put in effect as the chaos took hold. Rioters broke windows and destroyed property as they streamed into the building. They began freely walking through the halls of Congress, entering lawmakers’ offices, occupying the Senate chamber and climbing on walls and fixtures.

Lawmakers evacuated the House and Senate chambers and did not return until about six hours later. Some of the Republicans who had vowed to object to electoral votes abandoned those plans in light of the violent riots.

Congress continued tallying the votes, concluding at around 3:40 a.m. on Thursday.

As the siege of the Capitol was underway, Trump took to Twitter, initially to attack Pence for refusing to reject electoral ballots. He followed up soon after with tweets calling on his supporters to “please support our Capitol Police and Law Enforcement.”

Later that afternoon, he urged his followers to “go home now,” while offering sympathy for them and falsely repeating that the election was stolen. Those tweets were removed by Twitter, which temporarily locked his account.