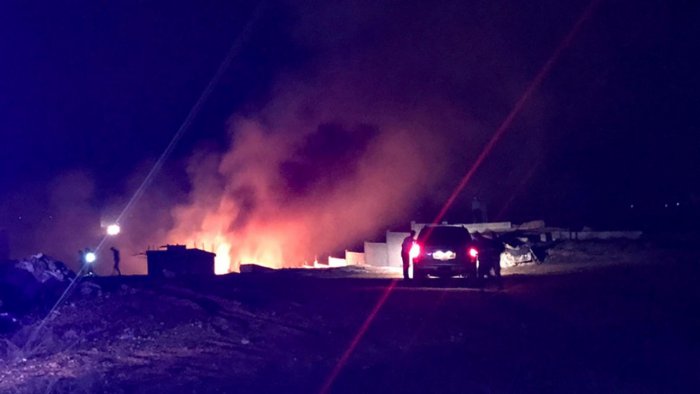 An explosion rocked a warehouse storing gas canisters near Lebanon’s border with Syria. At least 10 people were injured, Jan 3, 2021
Share:

At least 10 people were injured when an explosion rocked a warehouse storing gas canisters near Lebanon’s border with Syria, the Lebanese Red Cross and the army said.

The Red Cross said it dispatched several teams of rescuers to the village of Al-Qasr in the eastern Hermel region where the explosion occurred on Sunday and rushed the injured to hospitals.

“We have responded to an explosion in a warehouse that stores gas canisters. We have responded with three teams. Ten people have been wounded and transported to nearby hospitals,” a Red Cross statement said.

A Lebanese army spokesman told AFP news agency that the explosions occurred near one of its checkpoints and that none of its members was injured.

It was not immediately clear what caused the fire and explosions.

The region of Hermel is known for its many illegal border crossings into Syria which are used by smugglers to move various types of contraband across the frontier.

Smuggling takes places both ways, but has been stepped up from Lebanon into Syria since the start of the war there in 2011 and as the country faces a growing economic crisis and international sanctions.

The Iran-backed Hezbollah movement, a key ally of the Syrian government, is often accused by Lebanese media and some political parties of running smuggling operations into Syria to the detriment of Lebanon which is grappling with its worst economic crisis since the 1975-90 civil war.

In its statement, the Lebanese army said the warehouse was owned by a Lebanese family, but did not say whether it was used for smuggling fuel.

The explosion came at a time of increased tension in the region on the first anniversary of the US assassination of Qassem Soleimani in Iraq, an Iranian general who was also an important ally of the Lebanese Hezbollah group.

Sunday’s fire started while Israeli jets were flying low over Lebanon and as Hezbollah chief Hassan Nasrallah was delivering a speech to commemorate Soleimani.

The jets caused confusion over the source of the explosion. Israeli jets regularly violate Lebanese airspace and have often struck inside Syria from Lebanese territory.

“The site contains diesel fuel in addition to the gas canisters owned by a Lebanese person from the Obeid family who is closely associated with the Iranian backed Hezbollah and runs a fuel smuggling operation from Lebanon to Syria,” according to MTV

“Years ago, Obeid turned from a truck driver into a wealthy man and he deals with several fuel companies in Lebanon. He purchases fuel from them, stores it and then smuggles it to Syrian territory through several means,” MTV sources were quoted as saying